Yes! His sister is still kicking and very healthy. Vet can’t believe she is as old as she is and how fantastic her blood work looks.
Edited to add cat tax for my boy who had the treatment 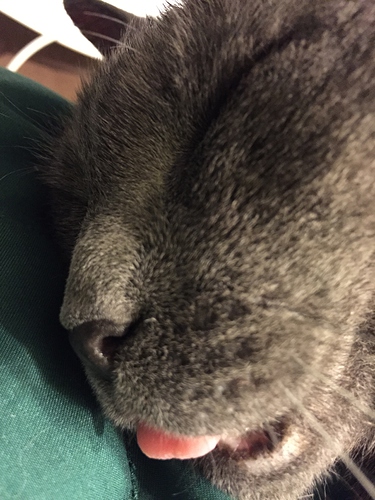 Yes! His sister is still kicking and very healthy. Vet can’t believe she is as old as she is and how fantastic her blood work looks.
Edited to add cat tax for my boy who had the treatment

how old is this “sister” ? very impressed !

She is 24. We lost her brother about 6 months ago. They were the same litter.

ery in a large town because they could show me that they did this often with a high success rate.

There is the possibility that the can make the cat hypothyroid and you’d still need meds, but my boy came out perfect.

Your cat does come home mildly radioactive so make sure you look at aftercare to make sure it is something you can do. For example we had to store his poop for 6 months before we could trash it due to the radiation. Easy to do with a house but maybe harder to do if you had an apartment.

This is definitely an option for us if we see improvement of the liver values when she gets tested in a few weeks. So far the pilling is going OK but it takes 2 of us, one to hold, one to pill…and its every 12 hours. No way can we not be home now - she’s never been ok with strangers so having a pet sitter do this is out of the question. I’m pretty sure I could pill her myself if my husband weren’t home but there is no way he could do it, LOL, he’s only capable of holding her. Sigh.

I love the idea of curing it, the aftercare wouldnt be an issue for us. I’d definitely pay for that!

Coming in late here, but I had a cat who got the radioactive treatment and it totally fixed the issue. They did have me give pills first to see if it worked.

She had to stay at the clinic a few days for the radioactivity to subside a bit and then, when she came home, you were supposed to limit close contact with her for an additional period of time, maybe a week. No requirement on storing poop; they said to flush down toilet, again for a period of time definitely longer than week. There were warnings of dire consequences if you put it out with the trash as allegedly trash trucks are scanned for radioactivity as they enter the facility. Even if that actually happens, not sure how they would trace it back to a specific residence. Nonetheless, I flushed it

Overdue update… its been a rough go for humans and cats up in this house, but I think we’re over the hump at least temporarily.

About 3 weeks into the oral methimazole, my girl started having recurring vomiting episodes 2am, 4am, 6am - all clear liquid saliva type stuff/ non food. Cerenia helped calm things down. We started waking up several times per night to feed her, which turned into her waking me up every hour - and by then my brain would do the mama/infant thing where any noise out of her caused me to immediately wake up - could not tune it out. Zombie status for me but no vomiting and happier cat.

As for the methimazole, vet had us cut the dose in half, but the second she was taken off the cerenia she would start up with the vomiting again. Vet had us stop the oral methimazole all together, kept her on cerenia for a few days, and voila, no more vomiting.

We have since come up with a new plan involving daily omeprazole, sequestering her in a room at night where we can leave her with food & then give her fresh food at 3am (and i just ordered an auto feeder that has icepaks so we can load that sucker and not wake up at 3 to feed her). She isn’t a huge fan of being locked up, kinda sounds like we have a werewolf in the guest room each night) and the cat on the other side of the door isnt helping matters - BUT no vomiting, and she’s eating all the food we give her. AND the humans are getting a bit more shut-eye.

Yesterday we started her on the transdermal methimazole that goes on the ear. Going to see how that goes.

In talking to the vet (a new one in the practice because ours left rather suddenly with no notice, but this new one is great) there is concern that in addition to the hyperthyroid we either have IBD and/or lymphoma in the mix. So there are considerations there as to how to proceed but as of right this moment she’s doing quite well with the new routine described above.Will continue to monitor and bring her in for bloodwork once she’s been on the transdermal methimazole for a bit, or go in sooner if she starts to act poorly again.

Glad to read things have settled down - Jingles !

Ive read some cats react very badly to methimazole, but if yours is due to IBD or lymphoma, that’s not it.

I sure hope not.

Jingles for your girl! I hope she continues to feel better.

Glad she is feeling a bit better and that you are getting some rest.

And transdermal methimazole - who knew? I have one kitty that is on felimazole (bright pink pills - easy to see when he smiles at me and then goes down the hall and spits them out the rat bastard lol)Maybe I should see about that.

@myhorsefaith, the American Academy of Feline Practitioners has clinical guidelines for the treatment of hyperthyroid cats. Here’s a link: https://journals.sagepub.com/doi/pdf/10.1177/1098612X16643252

The guidelines have a lot of good information, including what to do about cats with other health issues. There’s also a very thorough discussion about the pros and cons of available treatments.

I once had a hyperthyroid cat that couldn’t tolerate methimazole. I had her treated with radioactive iodine, and she was completely cured. It was like a miracle to see her go from really sick to completely normal. No more pills, no more sick cat.

OP, well done treating your kitty. Glad you’re getting more sleep at night and things have settled down.
Our old girl is 16 and so far, so good, but this can happen pretty suddenly so we keep an eye on her.