I’m temporarily caring for a family member’s dog and he’s a handful. A cute little terrier who is generally outgoing and friendly, but who is also dominant and prone to snapping and even pretty aggressive biting when he’s touched in a way that annoys him. And it doesn’t take much to annoy him.

I can keep him away from other people and I’m very tactful in how I handle him so I’m not worried about him hurting anyone. However, having to tiptoe around him is annoying, particularly since he’s a velcro dog who wants to be hanging out right beside me all the time.

We’re doing a lot of basic obedience and work on good manners, though even that can be a challenge because he’s stubborn and sometimes uncooperative, but we’re slowly making progress. Still, the biting is a major problem.

Any suggestions for good books or websites that have info on addressing biting? I’m not expecting to “fix” someone else’s dog but I’d like to be able to live with him without getting bitten.

Lots of thoughts; but not sure I’d try them before I know for sure there aren’t other issues. How old is he?

I would be concerned that there might be a pain issue, especially if he is older.

I would get a basket muzzle for your own safety - because fear of being bitten is going to definitely change the say you handle him, and that can just feed into the biting. Whether it is biting out of pain, fear or dominance, you don’t want to “reward it” or cause more of it.

Are you doing obedience at home by yourself or with a trainer? I’d definitely be inclined to pull in a pro for at least an assessment.

The last time a terrier tried to bite me, I rolled it over, held it at its throat, like Top Dog in the pack disciplining a junior, growled loudly and stared until it went totally still and submissive. Didn’t take any time, only a few seconds. Then I offered friendship. I’m now a favourite person and Dog has never offered even the hint of a growl at me since. Probably not PC but worked for me and saved my skin.

He’s 5 years old and generally healthy except for major food allergies. It’s possible that the allergies could be causing discomfort but his diet is well controlled at my house and he doesn’t show any signs.

He’s definitely pretty stressed; he’s coming out of a household that is going through a really nasty divorce and the move to my house has been rough on him. He had a lot of separation anxiety for the first few weeks he was here but he’s starting to feel more comfortable with the routine. He’s only been here for about five or six weeks now, so I understand that it will take him several months (if he’s here that long) to settle in. But he’s had a tendency to bite since he was a young dog, even when his life was relatively stable so that isn’t a new issue, though I think it’s worse than usual right now.

I’m not afraid of him - he’s seventeen lbs of fluff - but maybe worse, I get annoyed at him really easily. I’m doing the obedience training myself and I’m actually a pretty good trainer when it comes to less reactive dogs, but yes, a pro would be a good idea and if I have him for very long I’ll go that route. A muzzle would definitely be helpful, at least for those times when I have to groom him or otherwise do something that would set him off. Thanks! (He says thanks, too.

(Sorry he’s so scruffy. I did take him to one groomer but they banned him from the salon because he was too aggressive. Going to have to schedule an appointment with the groomer at the vet’s office so that he can be done safely.) 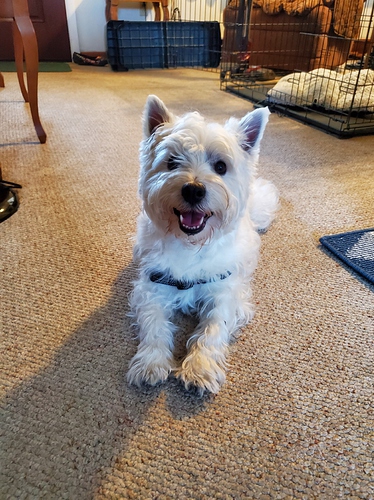 no advice but he is ADORABLE !

He is pretty darned adorable! And most of the time, he’s a really neat little dog. 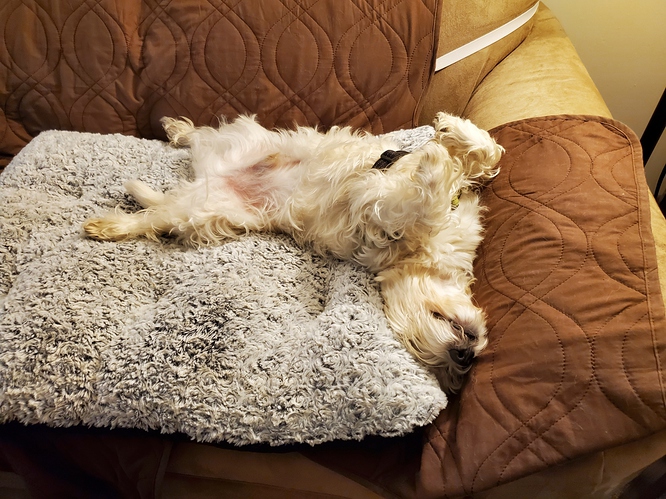 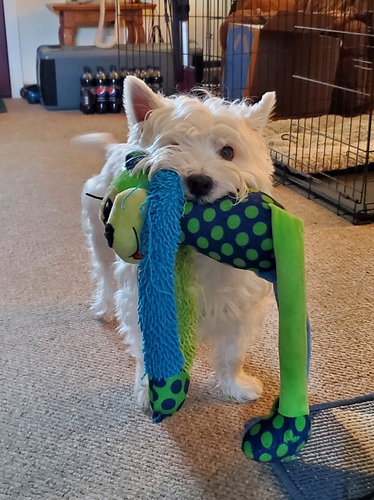 With that much stress in his life and who knows what before he came to you I’d get him on some anti anxiety meds ASAP. They’re just a tool to make him feel better assist any training you’re doing with him.

He sounds like my adopted dog when I got him almost a year ago.

He was just so stressed that he was easily pushed over the edge. It’s taken him about 6ish months to settle and literally the whole year to become comfortable.

Muzzles and distractions plus an ecollar have helped dramatically.

Ecollar for the vibration correction that works really well for my guy. A voice correction just puts him farther over the edge.

If his Velcro-ness is annoying you, and you worry about him biting randomly, can you not just put him in his crate when you don’t want to interact with him? I assume that’s his crate in the background. That little terrier shouldn’t be making you tip toe around him.

He is pretty darned adorable! And most of the time, he’s a really neat little dog.

He reminds me of a little terrier I that came into the clinic where I was working. He had an ear infection. He was being difficult so we took him in the back and while waiting for the vet to come with sedation, I gave him a good scruff shake, looked him in the eye and growled “knock it off you little b@$tard.” Not only were we then able to clean his ears without sedation, a week later he let us trim his nails without any fuss. Apparently, no one had ever told him “no” before.

Anti anxiety meds are a really good idea to try, I think. He had really bad separation anxiety when he first came and the first time he snapped at me was the second time I asked him to go into the crate, after I had left him crated for about four hours the day before. We worked through that (yeah, "no,"as far as he’s concerned, is just a suggestion, but we’re gradually changing his viewpoint on that) and with a lot of treats and repetition we got to the point where he’d go in without hesitation. He even started sometimes going into the crate on his own to nap on his comfy bed.

I was pretty thrilled last week when he watched me getting ready for work and instead of getting anxious, he walked into the crate on his own and settled in. Smart dog!

But despite progress, he’s still pretty quick to snap. He and I visited his owner this weekend and he even bit her once when she tried to pick him up. He was in a state of high excitement at that point so given his propensity to bite, it wasn’t unpredictable, but ideally I’d like to try to teach him better coping skills while he’s with me. (I have no idea how long I’ll have him but it’s looking like several months, at least.)

His name is Brodie and here’s the pic I took the first time I found him napping in the open crate. He’s a cutie and most of the time, he’s as sweet as he looks! (It’s the 5% of the time that he’s not that’s the problem. sigh.) 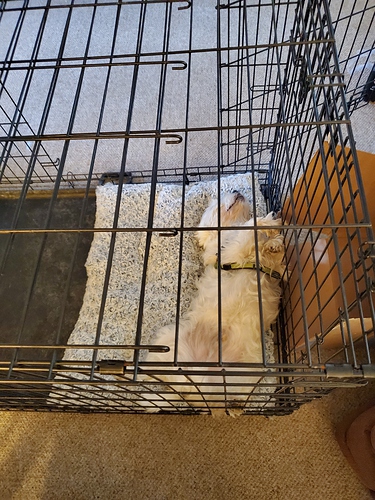 He certainly is a cute little fink. I’ll give him that. But the biting…oh no. I think you are headed in the right direction with him. IMHO he needs stability which you are providing.

P.S. you may be entertained by the fact that last night I had a little kit fox hanging around my house. He sat under my balcony and was having quite the chat fest with someone in the distance.

How much exercise does he get?

I’m sure this won’t go over well but how did he settle after seeing his owner? Did it add more stress and anxiety? They might need to not see him until they’re ready to take him back.

I had to travel for work for a few months and my parents took my dog. No aggression but definitely some anxiety. Even hearing my voice on the phone would set her back and make her more anxious so we made sure she couldn’t hear me. Once I was back she was a velcro dog for a few weeks then settled back into our routine and was completely fine.

Valid question about how he was affected by seeing the owner again - he’s definitely a stressed pup and yes, seeing his owner affected him. But he seems to appreciate the peace and quiet at my house so he’s settling back in a lot more quickly than when I first took him in.

I think he’s getting enough exercise. He’s actually a pretty lazy dog and since the “come” command is also optional as far as he’s concerned, getting him out for a walk is one of the times he has the tendency to snap. If I call him to come and he decides not to, he has threatened to snap if I reach down to attach the leash. I wouldn’t try to physically drag him anywhere but I wonder if maybe the owner’s ex did.

Sometimes behaviour like this can be caused by people and their obtrusive ‘small-dog-handling’. Not every dog likes being lifted up, but smaller ones often have no choice but to find themselves in the air out of sudden (Who would do this with a big dog?). Or they experienced that someone (sometimes children) pets them roughly. So they defend themselves. Trust, trust, trust!

Counter conditioning? If you can find a safe treat, I think you mentioned allergies.

Bravo for being open to consider anti-anxiety medication! Given he is not permanently yours and you won’t have him very long, I think medication is unrealistic. Board-certified veterinary behaviorists are expensive, difficult to find appts with, and the medication process takes months. The follow-up would have to be transitioned to the owner… it just doesn’t sound realistic given this temporary situation.

If he were in my care, I would try to tread lightly and shield my heart. When he goes back to his owner, he’s going to go back to the behaviors that work for him. I would focus on doing what you can for a safe and harmonious household, like a consistent routine and predictable handling, no more no less. He is someone else’s dog.

@blue_heron, he’s highly food motivated so I use treats for the basic obedience work. But I’m not familiar with how to counter-condition a dog who bites. Any suggestions on where I can find more info about that? (He can only eat fish-based, grain free dog foods. There are fish-based, grain free treats available, too. Who knew?)

@Bicoastal, good points. You’re right, if the medication process is long and complicated, it probably wouldn’t work for this situation. And you’re also right that he isn’t mine and there’s not a lot I can do to “fix” him when he’ll be going back home eventually. He does have a lot of really good points so as long as I’m tactful in how I handle him and I keep him away from people he might bite, that might be pretty much all I can do. I am going to work on the obedience work and good manners because the obedience is fun and good manners are a must in my house, but the hope of completely stopping the biting (or at least, decreasing it to very rare occasions) might not be realistic. Still, I’m going to keep researching it. I’m far from an expert on handling snappy dogs so any good info I can gather can only make both our lives easier.