Does Rhino always cause an abortion?

We just bailed a mare from a low end auction/kill pen type situation. She may be 5/6 months in foal to a mammoth jack, and definitely looks it. She’s waiting to be evaluated by a vet right now…she is in good weight but has a badly ulcerated eye and some sort of virus, suspecting rhino but we will see.

Our first prerogative is her rehabilitation but IF she is in foal and this is truly rhino, in any of your past experiences….well, should we assume she will abort in a few months? Do they always abort?

There really aren’t any “always” in life so no, they don’'t always abort from rhino. I hope all is well and her pregnancy is fine.

No, they do not always abort. The shot is designed to PREVENT mass abortion in bred mares in herds on farms. Last I knew, there was always a chance of abortion after giving the shots, but the good breeders kept an eye on mares, rechecked for losses. Then bred mares back again after a loss. At the time of the discussion, you gave a series of 3 shots, could lose foal on any of the shots.

We only had one bred mare. Trying to be the “good” owners, she was vaccinated for Rhino. She lost her foal after the third shot. Mare was older, never got her bred again. NO ONE had said anything about mares regularly aborting after a Rhino vaccination or we would not have vaccinated her.

The Sporthorse Group discussing, was international, extremely knowledgeable people, assured me that for them, the Rhino shots were helpful in the multiple bred horse setting. They could rebreed, not lose the entire year with the mare.

So I now warn friends about the chance of foal loss after Rhino vaccination with any of the series. If they do vaccinate, get mare checked shortly after each shot to make sure she did not abort.

You may want to ask for more current Rhino information on the Sporthorse Breeders forum here. Things change over the years, I may be way out of date on Rhino side effects. With our bad experience, we never vaccinated for Rhino on our bred mares again. Never lost another foal either!

Again, with our bad experience, I probably not vaccinate for Rhino on this rescued mare. Just treat her visible problems, maybe antibiotics if she has a flu, to prevent pneumonia problems. Your Vet could better inform you of how to deal with your mare’s condition.

I vaccinated my mare for Rhino with no side effects. I read all the pros and cons and thought it was worth the risk. Abortion can happen with or without the vaccine. If the mare is already infected I’m not sure the vaccine will help.

Thank you everyone. Mare is back from the vet but we are not preg checking her for another week (didn’t want to throw everything at her at once). I spoke with the vet at length about the risks and he put me at ease. There is always risk, of course, and some things are simply out of your hands. She is only mildly ill and her eye injury is quite old.

He recommended giving her the second and third EHV vaccines when she would traditionally need them, down the line and IF she is in foal. The discussions of pro-EHV vax and negative EHV vax are a bit overwhelming.

Here she is settling at her quarantine stable. She is an extremely sweet gal who was obviously cared for well at some point in her life. 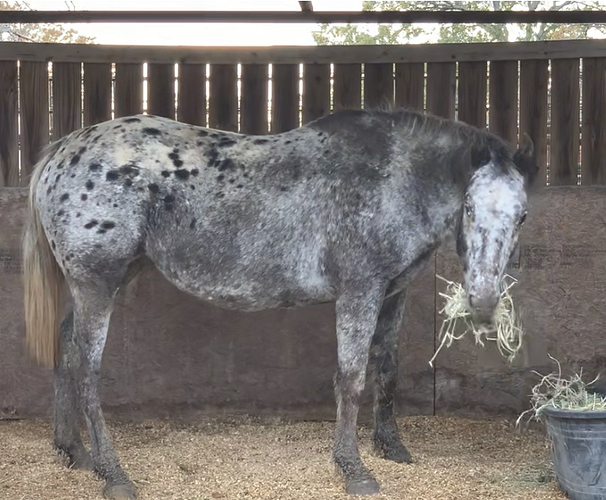 Did the vet say she has recurrent uveitis? Given her appaloosa coloring and her eye injury that would be high on my list of suspicions. If she already has an ulcer, you can’t treat the uveitis because of the ulcer, so you are limited on treatment options. Once the ulcer heals you will want her on preventative drops to prevent a uveitis flare up in the future.

Most vets under treat uveitis. My rescue had very aggressive uveitis unfortunately and it took a eye cup to keep him from rubbing his eye and destroying it. Ultimately, these horses go blind no matter what you do.

Assuming all goes well with the pregnancy you will want to vaccinate the future foal for leptospirosis as that is a leading cause of uveitis.

I wish you the best of luck with her.

I didn’t have much luck with my rescue as he aggressively fought the treatment (eye drops) to the point it was too dangerous for me to continue. He was super sensitive and flighty so that didn’t help. A calmer more trusting horse would probably be a better patient. I didn’t put him down but he was retired and eye drops discontinued. If/when he goes blind, that will be the end for him.

Just be prepared that if this is uveitis you will be treating her eyes for a long time to come. Now my friend has a nearly blind appaloosa that is super gentle (20 yrs old) so not all are lost causes. It just can be a frustrating and difficult condition to treat.

Since she is pregnant, if you can get her through the next few weeks without any health setbacks, I would have high hopes for a healthy baby.

The vet stained her eye and told me that it looks
more like an injury than uveitis, although that is what sprang to my mind as well. He said it is scarred and quite old, and she has adapted well to being completely blind in it. Not spooky on that side and simply turns her head to look in that direction. Here is a pic, the weeping is in both eyes and caused by the crud she is fighting: 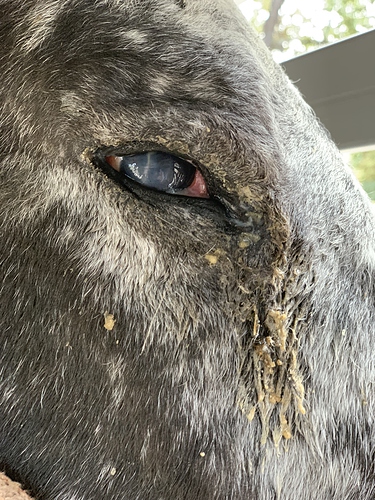 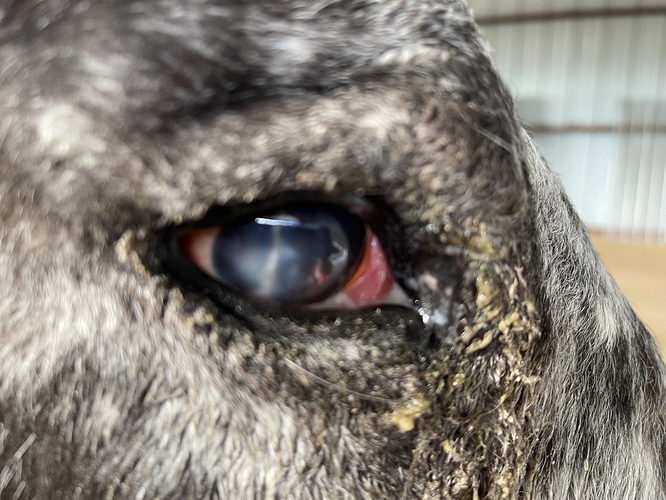 This eye is also slightly recessed, “pig eye.” I’m thinking that no matter what, she will wear a protective fly mask maybe with a hard cup from now on. Vet said there was nothing to be done to help it at the
moment. I am prepared to face a possible removal down the line. When she gets home I will have my own vet also come take a look.

IF she is in foal she looks fairly far along. Might be a hay belly or broodmare belly though. Next week will be interesting!

Thank you for the jingles and thoughts everyone.

NO ONE had said anything about mares regularly aborting after a Rhino vaccination or we would not have vaccinated her.

It’s correlation that a lot of the abortions after the 7 or 9 month vaccination are also months most commonly associated with aborting a foal, even with the vaccination.

The Sporthorse Group discussing, was international, extremely knowledgeable people, assured me that for them, the Rhino shots were helpful in the multiple bred horse setting. They could rebreed, not lose the entire year with the mare.

This doesn’t make sense. By the time you’re giving the first vaccine, the mare is 5 months along. If the abortion occurs at month 7 or 9, then in the Northern Hemisphere you’re into late Fall or Winter, and most aren’t going to re-breed until the next year. Even if it’s Month 5, it could easily be early Fall, though could be mid-late Summer if they got an early breeding start.

Settling? The vaccination series starts long after a mare is confirmed pregnant - month 5.

It does sort of look like an advanced case of uveitis. Definitely have your vet check the good eye very carefully, as you want to preserve her vision. It can affect only one eye, or start with one and move to the other. I had a one eyed horse (due to cancer) and she was fine for riding.

@JB This discussion took place quite a while ago. There was agreement between different members who were breeders of very expensive, WB performance horses, that abortion happened after giving the shots. “Just part of doing business.” They said they checked mares for losses after vaccination, did get mares rebred after the loss. They wanted a foal from her, delivery time was less important than getting ANY foal from her. Totally wasted year, no profit without a foal from these impressively pedigreed mares.

This topic came up years later, on the internet, when I said I could not recommend Rhino shots for bred mares. None of these experts were available without internet, back when our mare was carrying her foal.

I am sure there have been lots of medical studies, changes in protocols for breeders, since I was told this. At that time, we NEVER heard a word from Vets, other breeders, gossip, magazines, no internet, about the losses of foals after vaccinating for Rhino. Perhaps it hurts less when you have numerous foals each year. For us with one foal coming from a beloved mare, it was devestating. No warning at all. That mare only had that last, lost foal in her. Her uterine condition deteriorated to where she could not carry a foal, before we could get her rebred.

What a sweet chunky gal. Bless you for taking her on . I hope all goes well for her and that her foal is a delightful bonus. I have no help for you re rhino etc. just best wished for her andyou

She does look like a nice horse and I love appy color. Hope she has a nice healthy foal and that you get her eye problems fixed.

That’s because there is absolutely no data to back up this claim.

No Vet i know mentions abortion in conversations about Rhino vaccinations

Because there isn’t any data to back it up.

Equine Reproduction (ie Kathy and Jos Mottershead) are one of the best repro specialists in the country, I’ve followed them for a couple decades now, and keep up with their FB group since she/they left COTH years ago. The issue of (alleged) vaccine-induced situations comes up every year, late Winter into early Spring, when mares are in that 7-9/10 month range. I promise, if there was any merit to anything about the anti-abortion rhino vaccinations causing abortions, they would be on it and would be recommending against it. But they aren’t.

That doesn’t mean no vaccination has any risk to it, there’s always a risk. Every vaccine causes some sort of adverse reaction to some animal somewhere, for whatever reason. But common abortions due this vaccine isn’t a thing.

As I understand it, the OP was NOT asking “does the rhino vaccine cause abortion?”

The OP was asking “does rhino (the disease) always cause abortion?”

True, but I’m personally open to any sort of related discussion on the topic!

As I understand it, the OP was NOT asking “does the rhino vaccine cause abortion?”

The OP was asking “does rhino (the disease) always cause abortion?”

Correct, but the discussion started with a comment made that the rhino vaccination regularly caused abortions

There are different forms of rhino. A snotty nose strain, an abortion strain and a neurological strain are most commonly seen in horses. Hoping your mare has a lovely baby!

Thank you! The vet said “this mare looks like she could have EHV 1-4 and still drop a big healthy foal”

She has not even developed a cough and her runny nose is slowly abating. We’re going to wait until she is completely better before checking her, but I’ll keep this thread updated.