I don’t think you beat her in the least. I think she is confused. She’s an adult dog who is almost elderly with shifting boundaries. You got this. You can do it. Train her like a puppy. Boyfriend doesn’t get to undo your work. She WILL learn. Crate. Train. Teach her to alert to go potty. It won’t be immediate but she can do it

Do you clean her pee spots with vinegar or other neutralizing spray? Is her “spot” on carpet? Have you lived in the same place? When we moved to our farm, both dogs would go up stairs and pee in one room. We actually started calling it “the stinky room.” We decided to pull up the old carpet and refinish the hardwood underneath. OMG! Previous owners must have had pets that peed on that area too. Once we refinished the floor the behavior never came back. So there could be a marking component to the behavior

I clean them but this room reeked when we moved in. My SO feels we got it clean enough and he doesn’t want to close the door to this room.

However if that door is closed she will pee in another room.

If she’s outside with us and I want to ride then I put her back in the house in the crate because she will pee on the floor, and I know she’s peed outside before that.

She was cleared by the vet for medical reasons.

She has gone in her crate once, we had a bunch of people over and had to put her up when she got overstimulated. Other than that she is good in her crate. As you can see it’s tough because people often think crates are cruel.

Crates aren’t cruel when used appropriately They’re boundaries. I’ve had numerous dogs who electively slept inside an open crate. Your dog needs instruction. Guidelines. I doubt she wants to pee up your house. Doing so causes her anxiety. She doesn’t know better. Teach her better. Treat her like a pup. Consistency is security. Your problem is your boyfriend. Not the dog. And I’m not judging you. I’ve been there. You can fix this. He won’t.

Some older dogs just can’t hold it in that long anymore. At 8 she is considered an older dog,

I would have her checked for urinary issues and maybe try picking up her water after 6pm.

Get up and let her out to go and then everybody go back to bed? I have had 2 females who had bladder leaks while sleeping, if left too long, so I just got up earlier to let them out since they couldn’t hold it all night. A pain but it worked.

If crating works and she won’t pee in there I guess it is an option. I don’t use them myself but if there is any chance she will pee while in there I would find that somewhat cruel.

Agree that as an older, spayed female, there may be some incontinence issues involved. Not full urinary incontinence, but less control. It might help to ask about a trial of Proin.

I understand that it’s a pain - when my dogs are up, it’s very difficult to get them back to sleep. If I get up at 5:30am to let them out - we’re done.

But…it is what it is. I’m not sure there really is a solution other than to get up with dogs when you have dogs. Limiting evening water, taking out just before bed, and get up when they get up.

I have an elderly JRT with the similar issue, no cats involved but if anything wakes him, out he must go immediately or he will pee right on the floor beside the bed.Actually my female Dal was that way in her older years but she would hide… a crate did help her but I crated all at night then. Heck I’m in my 30s and if I wake in the middle of the night I often have to get up too. I get it, it’s frustrating but I just think if someone held me in bed with a full bladder until x time how awful that would feel. JRT knows the drill… out he goes to pee and right back to bed for hopefully a little longer of sleep. I don’t do anything else so he doesn’t get to thinking it’s time to be UP up. Second thought beyond crating (doesn’t work for me because JRT can’t manage in the dark himself anymore) but could you create a “safe space” perhaps on a tile easy to clean floor . Take an old crate pan and then line with the bed pads they use for accidents in nursing homes. Then if she does go there, you just toss the pads and then hose off the pan and take it out if company is there…

You have to want this to work. Accommodating your animals isn’t necessarily giving in to them or letting them have their way. It’s not such a black and white or tough mindset.

My cat is on an auto feeder for his morning dry meal, and it was the same when we had 2 cats. So they don’t associate their breakfast with people. So that could be an option. Even if they did associate breakfast with people, it’s fine to let the dog out and go back to bed and keep the cats at x time. This isn’t a cat problem though.

Occasionally I’ll hear the dog walking around at 3 or 4 so I get up and let her out. I don’t say it’s not time for that and go back to bed. That’s ridiculous. My peeing at night can be random too, so it happens.

If the dog is otherwise healthy, I would treat her as a puppy, but she is older so she might have less control, sort of like a puppy. Rewards and a watchful eye. You’ve got to stay dedicated and put the dogs needs and training first. It can he tiring, but barring any physical issues, it should pay off after a few weeks and she should become a bit more regular and interested in peeing outside only.

Training her to ring a bell or signal is a good idea. She might not do it on her own because she was never taught to or doesn’t know how to.

I don’t see crates as cruel as long as they are large and the dog is let out appropriately. My dog sleeps in her upstairs crate, there’s a blanket over it so I suppose it is like her den. She willingly goes in there (I don’t shut the door) and I’ve offered her a dog bed outside of the crate, but she prefers the crate. So you can make the crate a cozy place for a dog.

Literally no one said you beat your dog. Only that the response could’ve been too harsh. Harsh for one dog is a look, doesn’t have to be physical. You need to get her comfortable coming to you telling you she has a need and she needs to know you are there to help her.

If she’s outside with us and I want to ride then I put her back in the house in the crate because she will pee on the floor, and I know she’s peed outside before that.

Is she drinking an overly large quantity of water? I think maybe she has an underlying issue you may not have found . Another option is using those pee pads? My aunt did for her older dog. At least it saved the carpet and the house didn’t smell like a public restroom.

My 10 year old female shepherd chow mix struggled with pee issues in the last few months of her life. She was constantly drinking and could not make it through the night without being let out several times or she’d have an accident. Turns out it was diabetes insipidus.

My 10 year old female shepherd chow mix struggled with pee issues in the last few months of her life. She was constantly drinking and could not make it through the night without being let out several times or she’d have an accident. Turns out it was diabetes insipidus.

Same with my 11 year old shepherd mix. She is on insulin now 6 months and well regulated and goes easily for 12 hours. It is heaven!

She was up multiple times at night and also peeing in her sleep before that.

As you can see it’s tough because people often think crates are cruel.

I think crates are often harder on the human psyche than dogs ( of course appropriately used ). If you rule out the physical possibilities a crate can be a very useful training tool that dogs can find comfort in. My old shepherd loved hers. I never locked the door. She chose to sleep in it. Sometimes my evil cat kept her company. 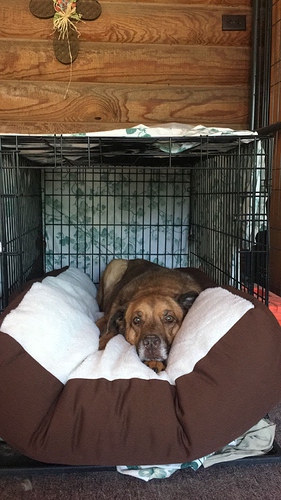 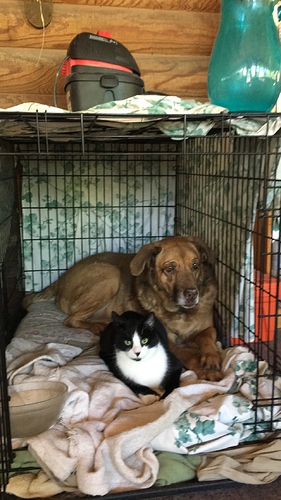 Agree about crates. My dogs love their crates. This is a great picture of my younger Brittany when he crammed himself into my ex-DH’s miniature dachshund’s crate. I’m guessing because it had the best crate pad that day. I do use crate pads; by the looks of this picture they were probably all in the wash. It is very normal for my dogs to be asleep in their crates even when the entire house is available to them. 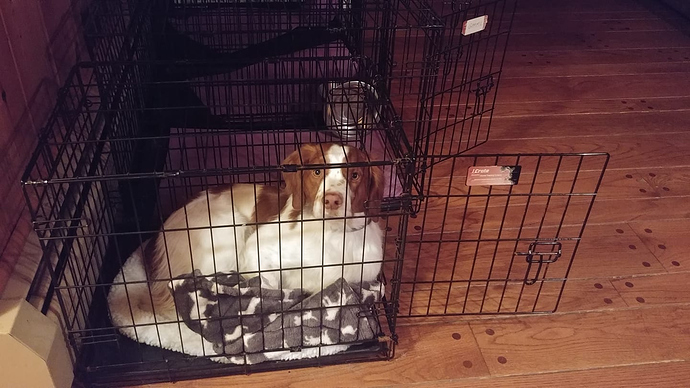 Crates are not cruel if used correctly. My Springer Millie LOVED her crate. It was “her” space. Springer Daizey-not so much. My JRT goes in by herself and very much considers it “hers”. So you just never know but crate training was a godsend to the humans in the house and kept my dogs safe when I couldn’t watch them.

I would take her to the vet for a urinalysis. A UTI is more common than you might think and if left untreated, can turn into kidney disease. Also, 8 is a senior dog, and even senior women can’t hold it in for long! The anxiety of knowing she shouldn’t pee in the house could also be causing her to pee. doing away with the rugs could reduce Your anxiety ( I learned this from a friend who has four dogs and NO rugs). I have a doggy gate so I can keep my dogs contained in the family room , where there are No rugs!