Easterners, Do You Ride Western? Why?

For me, suburban childhood meant Huntseat lessons.
Only Western rides were on the very rare livery trailrides.
As an adult I find the angle of Western leathers/fenders & stirrups somehow torques my knees uncomfortably.
If I do ride in a Western (or Aussie-type) saddle, I usually drop the stirrups and find myself a lot more comfortable & still secure.
FWIW, I’ve done this riding on some pretty vertical trails on friends’ borrowed horses & tack.
Left to myself, I’ve ridden these same trails in my dressage saddle, on my horse.

A friend challenged me to Western dressage at our GMO championship show so I scrounged up a Western saddle and headstall and a pair of bootcut jeans. 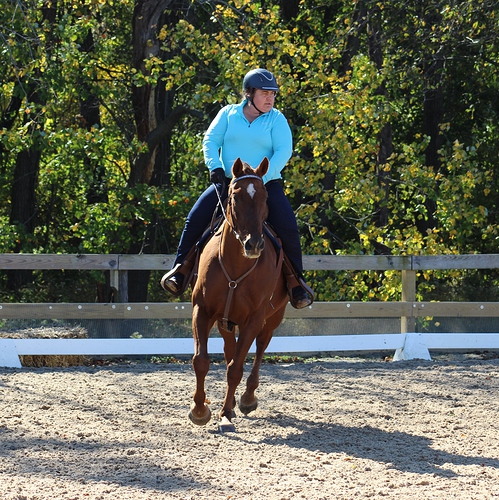 I never knew that!

I have heard that the French are very clear about the fact that they did NOT invent “French” toast.

Lovely picture!
When I did western dressage I took the cavesson off my dressage bridle.

You sound like me in this way.
When I was younger if I went trail riding and all they had were western saddles I would just ignore the stirrups and put my legs in a comfortable position for me I did not like the huge saddles that kept me from feeling the horse.

Although, I have never nearly hung myself by snagging my bra on the saddle during a dismount with an english saddle - just saying

Great pics!
And the lovely one of your 4-year-old disproves what some 21st-century parents of young h/j riders claim – that double reins are too much for young hands to hold. When I was a kid (older than 4, admittedly!) pelhams were almost as common on hunters as snaffles. Kids managed just fine.

All of this time I’ve been living in Alabama and have never owned a trailer with a ramp, lol. And if I’m going to be true to my culture (cough cough) i should have been on gaited horses from the start and a M&W trooper saddle.

I have ridden in a plantation saddles, ages ago. Hooded stirrups and all. I loved it, but I preferred the McClellan that hung on the bracket next to it in the tack room.

I love those saddles you posted! I saw one just like them online the other day – a Fabtron, I think. It reminded me a little bit of the McClellan saddle I rode in long ago. Nothing like it, and yet it reminded me of it. …

Great thread! I ride only eastern

I guess if Americans wanted to do a really historical American style of riding, we would use this sort of tack:

I used to love riding this way when I was younger (my bridle had a few more straps to it, though).

Not really, they didn’t have horses available until we brought them over several centuries before they developed their own ways of using them.

I think some of the earlier cultures that used horses for riding and had their own horse traditions were more like these riders: 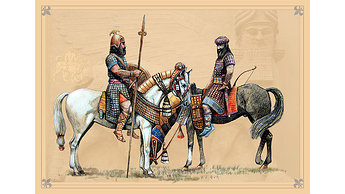 Here is an article on how the horse developed-re-developed in this continent: Horses in the United States

Horses were a crucial component of American life and culture since the founding of the nation. In 2008, there were about 9.2 million horses in the US, with 4.6 million citizens involved in the horse business. Notably, there are about 82,000 feral horses that roam freely in a wild state in certain parts of the country. While genus equus evolved in North America, the horse became extinct on the continent approximately 8,000-12,000 years ago. In 1493, on Columbus' second voyage to the Americas, S...

— There are multiple theories for how Native American people obtained horses from the Spanish, but early capture of stray horses during the 16th century was unlikely due to the need to simultaneously acquire the skills to ride and manage them. It is unlikely that Native people obtained horses in significant numbers to become a horse culture any earlier than 1630–1650. From a trade center in the Santa Fe, New Mexico area, the horse spread slowly north.[27] The Comanche people were thought to be among the first tribes to obtain horses and use them successfully.[28] By 1742, there were reports by white explorers that the Crow and Blackfoot people had horses, and probably had them for a considerable time.[27] The horse became an integral part of the lives and culture of Native Americans, especially the Plains Indians, who viewed them as a source of wealth and used them for hunting, travel, and warfare."—

I actually feel less secure in Western tack, I think mainly because there is so much leather there and to me I have less feel of the horse.

Mee too! I bought some used Western saddles for less experienced friends to sit aboard my horses more comfortably. But before actually going out on trails they have to show me they can ride …and for that, i’ll test them in English tack.

One fellow recently was miffed…saying oh he could ride! He rode barrel horses for heavensake.(borrowed for trailriding…he is not a competitor) I said: “Show me” and put him on a very good gentle, well trained mare. He slouched to the side and thought he should be able to neckrein. I could NOT get him to sit upright and even no matter how hard i tried. Also had to tell him, “you don’t neckrein today, not on a snaffle bit.” (he’s used to big ports and/or hackamores) … Well, i don’t actually have a western saddle for that particular mare, but she does have an endurance saddle, so for our trail ride i put a breast collar AND crupper on her, backcinched and there we were, halfway up a big hill and he slid off the saddle…yep, plopped right there on the ground. Mare stayed stock still, and he rolled with it and was not hurt at all. Told me it was the first time in his whole life he’s ever ‘gotten dumped’. All that managed to do was solidify my opinion that if you know how to ride you can ride English, but if you don’t, then you go sit on a big leather chair on a horse with a super hard bit.

I beg to differ. Just because you have never ridden in a really good western saddle, or seen good western riding is no reason to dis everything western. I have ridden English most of my life, including competing in eventing, dressage and show jumping. I now ride almost exclusively western. A good reining saddle puts you in a position almost identical to a dressage saddle. I have found that really good western riding is much more subtle than most of the English riding I have been exposed to. Without contact, the horse depends on subtle seat aids and discreet rein aids. Curbs are a wonderful bit to ride a really broke horse in. We all ride horses. We should spend more time finding our common ground than harping on our differences…just saying.

I did not like the huge saddles that kept me from feeling the horse.

The only time a Western-styled saddle was comfortable (still sans stirrups) was a borrowed treeless. I could feel the horse’s bodyheat through the seat. Cozy

Maybe there hasn’t been the same “romance” around “English” riding in the US. But how did it get to have a “snobby” “upper-class” image?
And why would so many people prefer hauling around a 20-30-lb saddle with two cinches they throw over their poor horses’ backs to a small, lighter English saddle they can set down gently, and doesn’t have a horn in the way?

As a born and raised west coast girl that has made a living out of a western saddle…
Reading some of the comments here is a good indication as to why english riding has a snobby image. LOL!

And if you’re slamming your saddle down on your poor horse’s back, then you’re doing it wrong.

Well, I live in the west but maybe its applicable since at 26 years old I have rode english /jumpers/dressage/eventing my entire life. I took a job guiding trails last summer and I fell in love with being able to hop on in my jeans and go. I love the laid-back attitude in general and also how diverse western riding is. In all honestly, I ride the same no matter what saddle I am using, and that is pretty much due to having extensive lessons in the english discapline and a total of 0 lessons in western. But, I have heard that good riding/horsemanship is good riding/horsemanship reguardless of what the saddle looks like.

I love the art that goes into western tack too.

I ride both. I usually use my western saddle for trail riding because I find it more comfortable for long distances and because with a breastplate, it’s more stable on my horse on the steep mountain trails. I ride mostly English in the arena because my English saddle gives me closer contact than my western saddle and it’s easier to work on refining my mare’s training.

I grew up riding both pretty much equally. I always did the low-level open shows with my horses and we’d do both English and western classes at the same show, generally pretty successfully.

And ironically, I spent a lot of time in a western saddle when I was learning to ride saddle seat (Arabians). My instructor had me posting without stirrups until my legs turned to jelly. I’m not going to lie, I would regularly grab the horn when I felt myself start to slide off. As I got stronger, I was eventually switched to a flat seat saddle but since she also had horses that showed western, I learned that too.

I don’t think anyone here is “harping on” differences. I enjoy conversing about the different types of good horsemanship with other horse people. People can discuss differences without disagreeing, and I don’t see anyone here disagreeing with anyone else. You seem to be the only person here having a problem with that, so please don’t bring in a bad note to an otherwise nice thread.