I just saw a post on FB where the horse developed a huge amount of scar tissue after an injury on the leg that had to be removed. You couldn’t tell at all from outside the horse other than he was lame and sore. Maybe ultrasound where the chip was removed to see?

This is a good idea. There is a hard bump where the bone chip was, it might be a lot of scar tissue.

Weight is weight. I had riding lessons in my teens/early twenties so I ride well enough. Unless it’s a beginner with poor balance there’s really not going to be a difference between me and anyone else riding her, (we’re all at the same level). I’ve taken lessons from the trainer so if I was doing something odd or different than her she would have noticed.

She’s been tested for neurological issues and came out normal. I’ve put down two horses due to Wobblers so I’ve seen horses fail a neurological exam. I watched and she looked normal to me, too.

Sorry, I don’t know how to multi-quote. blob99 - “When there is pain there is also usually compensation and weakness/uneven muscling can occur. It is also very possible that this is a case of weakness a bad muscle memory caused by the bone spur.” That’s possible. Since the bone chip bothered her so much the compensation probably started before the surgery. I followed the vet’s directions for bringing her back but who knows, maybe she got into the habit of moving differently.

I just realized I should have someone film from behind while I ride. Might show how the legs are twisting that isn’t as obvious as from the side.

OceansAway: “Personally, I would also want the SI examined, but that’s more of a personal paranoia stemming from a horse of mine that had a spinal fracture resulting in spinal compression and neuro symptoms”. I’ve asked the vets about this but none of them thought it was an issue (she doesn’t have any standard symptoms of SI problems). I still suspect it.

Before I consult with another vet I’m trying something different. I’m giving her at least two weeks off, daily bute with her supplements, icing the leg and hand walking her. If there’s an improvement when I ride I’ll have someone video me to give the vet something to compare.

If this can’t be solved, she is trained to drive. I just don’t have a cart right now because evil Texas insists on probate even if there’s a will (I’ll receive a bit of money that I was planning to use to buy a good cart.) My father passed a year ago and we’re still waiting for probate to start, but that’s a whole other story.

Thank you for your comments! I’m not giving up yet.

Gave her three weeks off, just light turn-out and iced her left hind leg daily. Tried riding again and no improvement. Just the usual small amount she has after a few days off, but after a couple of rides she’s having problems again.

Ordered a pair of Iconoclast Orthopedic Hind Sport Boots but they didn’t help either.

I polo wrapped the hind legs two weeks ago. The catching/dragging of the hind leg has stopped and she is no longer twisting the back legs after a ride. She stands quite straight now.

Maybe it’s a problem with scar tissue where the bone chip was removed and the polo wrap provides support?

Pictures of her tracks in the arena. First she’s walking, second she’s trotting (I’m riding both times). It looks like she’s dragging her right leg which might mean the left leg is too sore/uncomfortable to put her entire weight on. I think I have enough information to call out another vet. 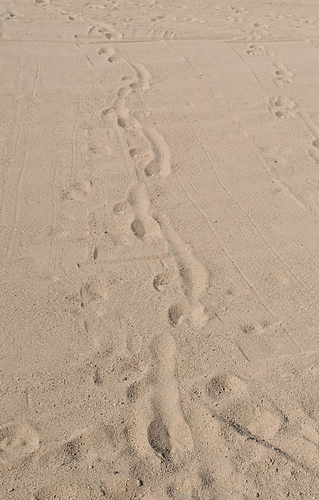