Shout Out to Morgan Breeders

I was first introduced to purebred Morgans in western Mass in the early '70s. (Bobbin Hollow Farm, and a fellow boarder at the Mt Holyoke barn.) They were definitely saddleseat show horses, with weighted shoes, trained with rattles around their fetlocks. They had good temperaments, but were “not my style”.

Twenty years later, in Virginia , one of our neighbors had several Morgans, which they rode in Western tack, mostly trail riding. They were very relaxed and safe. One of them took really good care of the wife, who had bad arthritis. Hard to believe they were the same breed.

They had a young mare, Statesman Serenade, that they wanted to sell. They paid my sister to train her as an eventer, and she enjoyed her a lot. She was sold to a teenager in Mass, who had a lot of success in both lower level Eventing (Area I year end awards) and in Morgan shows.

My introduction to Morgans was when I wanted to breed my lovely pony to a Morgan for a nice driving pony. I found a gorgeous Government bred stallion. Went to meet him, and also saw his 2 year old colt, who had recently gotten tangled up in the fence. Basically turned his back legs into hamburger, but he stood rock solid while she showed him to me. I just fell in love.

My pony never did get in foal. But in 2003 I bought a cute yearling sight unseen, for $975 (a fortune to me at the time). He is full Lippitt, and my introduction to the Lippitt Morgan. When I went to buy another Morgan five years later, I couldn’t find any Lippitts that would work for me (now, I could find a few hundred, probably). So bought a Morgan with a huge mixture of breeding. In 2018 I decided I’d like to buy one more baby for me, and full Lippitt. Merlyn was born in 2020 (I actually bought him at a day old, and two weeks before the pandemic hit) and is just a riot. I adore this baby and would buy another 20 if I could and had the time.

But most of the behind the barn crosses were registered Morgans and not thrown out of the Registry, so they’re still in there.

still a hell of lot better than watching a highly regarded Saddlebred trainer set in his office with about a hundred registration papers spread out looking for a better set for a horse he was selling…his comment was the horse was Much better than his papers, he needed papers that matched his worth

Yes I do think it helped but the fact that so many were imported or had one imported parent also has tended to drive the price up as well.

What a nice tribute. Brandon looks like a blast and love the photos.

I, too, grew up in CT & my entire family are die-hard Morgan people. In my mind, the ideal horse is a Morgan from government lines. Beautiful in body, mind and heart!

Thank you, he is a blast and a real character. It’s quite obvious after our maiden voyage of not just the show ring but having to be in the stabling area (in a stall) between classes that I have to invest in some stall toys. He was quite happy that his newfound friend in the neighboring stall was willing to accept his invitation to play tug of war (the owner of the other horse wasn’t as amused as I). Apparently, he was able to unbuckle his halter that I had hung on the stall door. When I returned from picking up my first test, I found him slinging the lead line that was attached to the halter in a way that enabled him to toss the halter halfway over the stall wall to his new buddy. Instead of being afraid of it, the other horse latched on and they were having a great time playing. I’m afraid that he finds similar ways to entertain himself at home too.

A couple of months ago I got a mare who had been seized with the rest of her herd in a neglect case from a Morgan breeder (long story, basically boils down to an elderly woman with dementia whose farm was in disrepair). I got the DNA kit, sent hairs, and just a few weeks later, mare was IDed. She was actually a couple of years younger than expected. And her DNA results came back two days before her birthday. We had a nice celebration for her later that week. The registry DNA program is such a benefit. I didn’t realize other breed registries were not this straightforward when it comes to reuniting a horse with their identity.

I think the “Saddlebred in the pedigree” angst is something people blow out of proportion at this point in time. Of course we all know it happened in the past. It’s in the pedigrees of a lot of very nice horses. But to continue to use it as a point of division in the breed is counterproductive to me.

I worked for a Morgan guy who did this when I was a kid. That was a long time ago😉.

I agree 100%. One of mine has a Saddlebred ancestor (Upwey King Peavine, I think) and he looks totally Morgan. The SB did sort of show when he was younger, and then not so much when he started filling out.

Oh, and he can rack. Which is weird and fun at the same time. 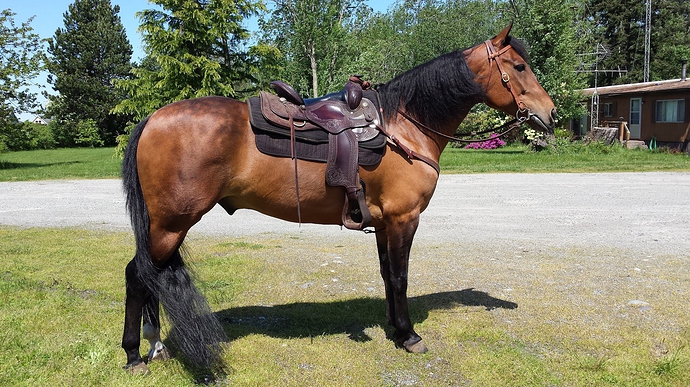 One of my most favorite horses was a ASB/Morgan cross. She was dreamy to ride and a total hoot on the ground. Smart as a whip. She was registered Morgan (won at big shows) but had her papers stripped when DNA showed ASB blood. Her breeder was one of those behind the barn types.

She was a super fancy lesson horse.

I have a beautifully bred morgan from the Miner Institute in Chazy New York. I can’t tell you how many people see him at dressage shows and are shocked he’s a morgan and not a small warmblood. I am always happy to promote the breed having grown up in Vermont and then ridden them exclusively in college in New Hampshire. I think people underestimate the variety and versatility of the breed. 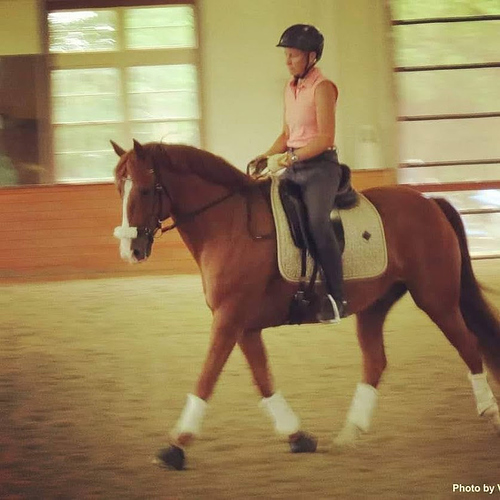 Wow, he is a looker!

While I understand as a breeder there are specific breed standards to be upheld and depending on what that is to you, it can color what you feel are appropriate breeding practices. I personally will not weigh in on the Saddlebred issue or other sensitive topics within the breed. At this juncture in my life, I prefer to look at the individuals and to your point that imo highlights the versatility and variety of the breed. If they have the disposition, the conformation and movement that allows them to be handy in the disciplines of my choice then in all honesty I pay attention to the lineage only to increase the chance of repeating the success of my choice (ie finding another). In the end though I rarely am attracted to one who does not fulfill or meet the breed standard. Funny how that still can come in many different colors, sizes and to a certain extent shapes. Many years ago, I took the total number of Welsh Cobs who had successfully competed at third level and above and compared it to the total registered with USDF. The percentage was quite high. I think if you if you did the same with Morgans the result would be rather high as well (I’ve seen the lists/numbers that some Morgan enthusiasts have been tracking already). This was repeated (welsh cobs) when I looked at success at the higher levels of competition with combined driving out of those registered with the discipline through USEF (at the time AHSA). Again I think this would be another area where the numbers prove the capabilities of the Morgan breed and the success of specific breeders. I agree with you that people underestimate or dismiss the breed. So far the stigma of the ‘show horse’, ‘saddlebred’, ‘gaited’ breed from the perspective of the ‘sport horse people’ does seem to keep this misnomer alive even if I believe the numbers prove to the contrary…that’s okay I suppose (ie, ‘our’ secret) as long as there is still a future of ‘good’ breeders coming up through the ranks to keep the breed alive.

I think my guy looks very “old style” Morgan (except for his color) A lovely chunky guy. He is actually a mixture of foundation and modern show breeding, (with a couple of SBs way back) 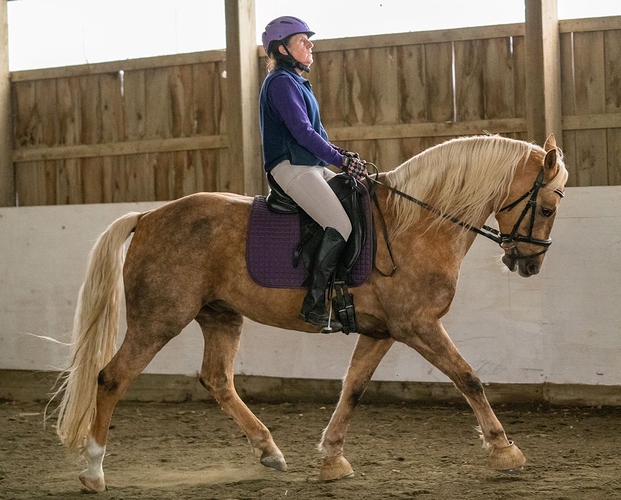 Lovely is an understatement @MsM. That is one good looking horse!

I was introduced to the Morgan growing up at a barn in Maryland. I thought they were cool, fun rides but at the time everyone was getting the tall TB’s. I couldn’t afford a horse period.

Now my TB is retired, I am riding a Morgan and am in love once again. I will be looking for a Morgan in the future.

i only have one morgan now, but have had several in the past. I consider them ‘my breed’ and probably always will. I grew up riding Morgans and Saddlebreds and to me, the Morgan Horse is the perfect horse.