The study team, at the Universities of Glasgow, Bristol, and Nottingham Trent, analysed data from over 200,000 fences in about 6,500 competitions over an 11-year period, and, overall, found thirteen factors related to competition, fence, and course design that meant falls were more likely to occur.

According to the study, “Fences with an approach downhill, with landing into water, frangible devices, and later elements of combined obstacles were associated with increased risk of falls occurring.”

Looking at the study:

When compared to corners with solid wall and top, corners with ‘post and rail’ walls and solid top, brush with ditch in front, trakehner with cross rails on top were at least twice as likely to be associated with a fall

Several of the results of this study are consistent with those reported in earlier studies. Associations between increased likelihood of falls and (i) fences later in the course, (ii) elements (in particular mid and final elements) of combined fences, and (iii) certain fence types were reported by Singer et al.

Downhill fences, water, late in course, combinations (after the first fence) - those all make sense.

Can someone explain the increased odds with frangible fences and fences with ditches in front though?

Frangible fences are supposed to reduce falls (rotational ones at least). Do they just happen to be placed in places with “comorbidities” (downhill, frangibles already being “tough” fences, etc)? I also would have anticipated that a ditch in front would present a decent groundline for the horse and give them plenty of time to get their feet up.

Frangible fences are supposed to reduce falls (rotational ones at least). Do they just happen to be placed in places with “comorbidities” (downhill, frangibles already being “tough” fences, etc)? I also would have anticipated that a ditch in front would present a decent groundline for the horse and give them plenty of time to get their feet up.

The study said that frangible being associated with fewer rotationals is “anecdotal” but since its big push has been less than a decade (they cite introduction in 2002 and popularity since 2015 which I think checks out?), I imagine that’s because no one has funded any studies. But I think they maybe need to add more variables to control for a couple of different counterfactuals since they treated it as a binary. “Fences that are frangible rather than solid are perhaps more likely to be misjudged as the athlete thinks they ‘can get away with’ clipping it and may approach the fence with less caution. It could also be that course designers intentionally build more challenging fences when they know they will be including a frangible device.”

One, riders know they are frangible and may take risks (speed) to save time on course.
Two, course designers make challenging fence that needs a frangible component because of its technicality or difficulty(ie max spread or max difficulty) to make riders “give it some respect” or not treat it as a frangible fence.

The one indirectly supports the other. Course designers make the fences more difficult, riders look for more ways to save time on course and know this fence can have a near-miss and likely won’t end their run.

It is likely not the “frangibleness” of the fence that makes it more dangerous, but the way riders treat it and the type of fence typically made frangible – IE fence types that have in the past killed rider/horse pairs.

The frangible “problem” of riders being less careful has been “solved” by giving 11 penalties. Not sure it’s all worked out yet, but the study only covered 2008-2018.

I think whats happening here is the frangibles have been added on fences that already typically cause falls like open corners. So the falls are really the same on the fence type however, with frangibles people aren’t flipping over for the most part.

Call me jaded but we have information on which fences were more likely to cause falls and it seems like those fences are being used more than ever now. Do course designers not know or not care? I have heard so many podcasts from course designers but no one ever has the balls to ask them if they know about this and if they consider it when adding these fences to courses.

I have to say you are incorrect there. Even in 2016 in the FEI Eventing Safety Study by the FEI they pointed out that frangible devices increased the risk of a fall or rotation by 1.5 times. The effect is real regardless of penalties being applied.

Many types of frangible fences, e.g. tables, become longer in their triggering which adds to the the complexity a horse must adjust to when they may be out of balance/control. Other frangible devices rotate down and out and may hang a hind leg when triggered with a hind leg.

I would say that too many course designers and builders are creating frangible fences without truly understanding how frangible designs were created (strike by the chest and front legs), and assume that a frangible device acts like some “fail safe” when placing fences in questionable placements.

Personally, I spend a little more time setting up for fences I know are frangible, as brushing across them could result in the 11 penalties.

trakehner with cross rails on top

Silly question, but what is a trakehner with a cross rail on top? Or is the single rail over the ditch somehow a “cross rail”?

I agree, which is why I put quotes in my post. I don’t think riders are willy nilly running at frangible fences “because they’ll fall down”. And since the study is about falls, I am interested in thoughtful analyses like yours.

what is a trakehner with a cross rail on top

It’s sometimes called a diamond fence. Instead of one horizontal rail over the ditch, there are effectively crosses or diamonds above the ditch. It makes the jump more difficult to read as there isn’t one focus point and you try to pick which part of the face you’re going to jump. 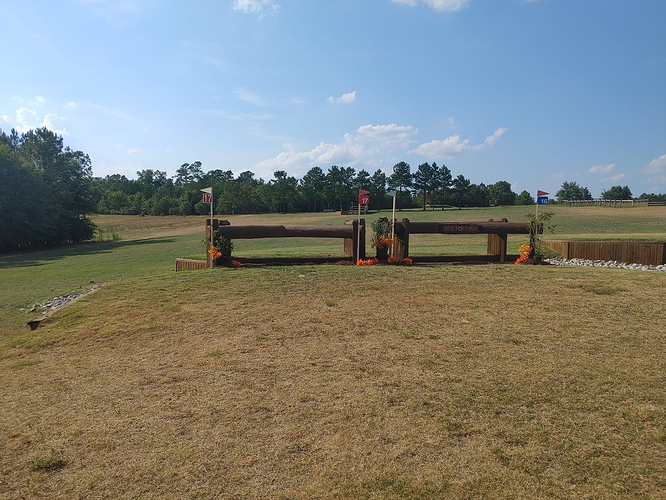 With the exception of the description Frangible Fences, every one of those are scenarios that drop the horses balance heavy in the front and reducing their ability to lift.

The decreased risk ones shift the balance to the hind end, provide increased recovery time and less complex ground conditions.

The frangible factor really needs a look into why the risk of increased fall is there. I don’t understand the physics of why.

I remember reading that study after the Canadian FEI Safety Officer went off trumpeting about how much safer XC had become when the stats actually showed a short period of improvement and a very stagnant period with no real statistical improvement.

Gotcha. Thank you and @gardenie! I didn’t realize these were a specific kind of fence.

Silly question, but what is a trakehner with a cross rail on top? Or is the single rail over the ditch somehow a “cross rail”?

Look at this FEI document

20 years ago a prominent TD told me that getting rid of tables and bounces, limiting the total number of combinations on course to two with only one allowed at a water and both in the first half and having alternate routes that let fast horses be competitive would eliminate 90% of serious injury falls. I thought he was probably right then and I still think so.

We used to call those “flying X” fences back in the early days!

I know this is just the beginnings of more serious, systematic research that needs to be done, but I’m glad for the information!

Would be interesting to also note the severity and consequences of the falls vs. fence types, too. I’d assumed that frangible fences were in the more likely category because more challenging fences would be rendered frangible, but it’s interesting to read people’s comments.

Do course designers not know or not care? I have heard so many podcasts from course designers but no one ever has the balls to ask them if they know about this and if they consider it when adding these fences to courses.

I do talk to Course Designers. Of course they care. Of course they know about fence safety and design. There is specific training available and most CDs have riding experience to a high level. Data is collected at Events. And it is never the Course Designer alone: the course builders, at international competitions the Ground Jury, the National Governing Body, the FEI, the Professional Riders’ Associations and Rider Representatives at Events all have an opinion and a role to play.

I will agree that the number of falls and fatalities has leveled off after substantial improvements over the past decade. British Eventing publish annual safety reports www.britisheventing.com look under “rules and safety”.