I am breeding my 2016 ASHA mare to Finest (Furstenball x Wie Weltmeyer). So excited! Foal will be black and incredibly typey - hopefully a future amateur Dressage rider’s superstar! 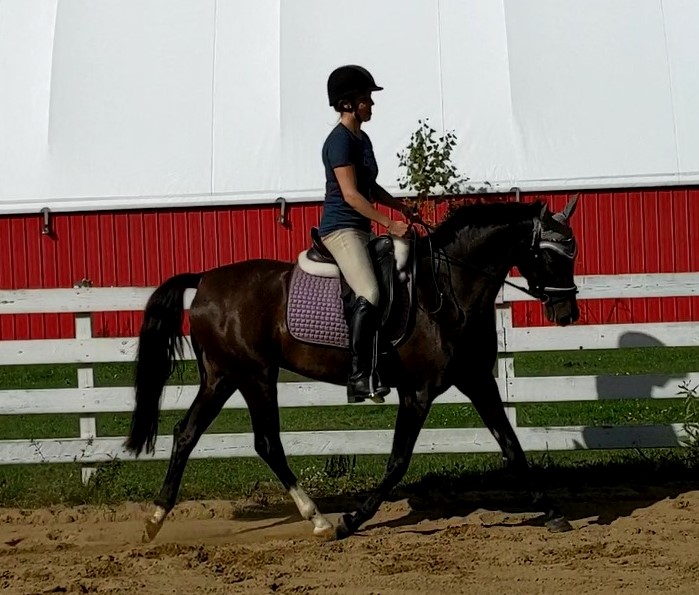 What a nice mare! I’m excited for you.

I think we might have had a thread going on this already, but I’m always excited to talk babies, so I’ll share anyway. Lol.

My mare SAS Arielle will be bred to Major Mac V this spring. I’m breeding for the Arabian working western divisions, primarily ranch horse and cow horse classes, so my goals and bloodlines are a wee bit different than most here.

I deliberately chose a stallion for this crossing who is a bit of an outcross (no Xenophonn/Hesa Zee or *Kordelas, and only one line to Khemosabi) compared to what’s popular in these classes today because I’m trying to get a “keeper” filly and wanted to have lots of options for her future matches. This foal will also have no lines to *Padron, Bey Shah, or Gazal al Shaqab, which is getting VERY hard to find in Arabs in general!

Arielle is tiny (13.2), which comes as no surprise when you look at her pedigree (https://www.allbreedpedigree.com/sas+arielle)! She’s about 28% *Raffles - and 35% Skowronek! - by blood. She’s very correct and has a TON of substance for just a little thing. She’s also extremely athletic and super, super sweet, and she consistently passes those traits on to her foals. She is a mare who tends to basically clones herself with every foal, and I’d be thrilled to get a carbon copy of her. I’m hoping, though, to add a little size and a bit more modern type with this match. We’ll see! This foal will be either bay (75%) or black (25%). I’ll be happy with either, as long as it’s a filly! Lol. A little chrome would also be nice, but Arielle is a serious chrome killer, so I’m not holding my breath on that. 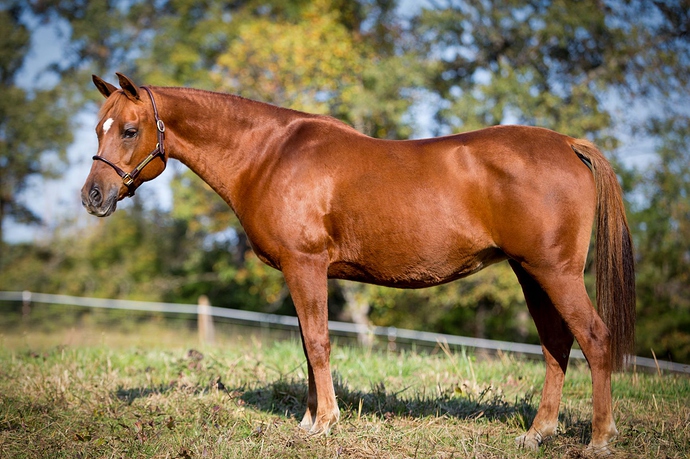 Lovely girls! @Montanas_Girl, who is Arielle bred to for this year’s baby? (I’m following you on the foal watch thread, too, but maybe I missed you saying it there)

@JBCool, her 2021 foal is by Shiner Dun It (https://www.allbreedpedigree.com/shiner+dun+it). The foal will be a full sibling to my coming-three year old filly (photo below) and also to Arielle’s first foal, TCR Automaticaly Dunit +/ who, last I checked, had something like 15+ Regional Top Five or better awards to his name, almost all achieved with a youth rider. This will be the first foal for which I’m the official breeder, but I actually bought my palomino filly as a custom foal. I love her so much that I jumped at the chance to buy Arielle when the offer came! 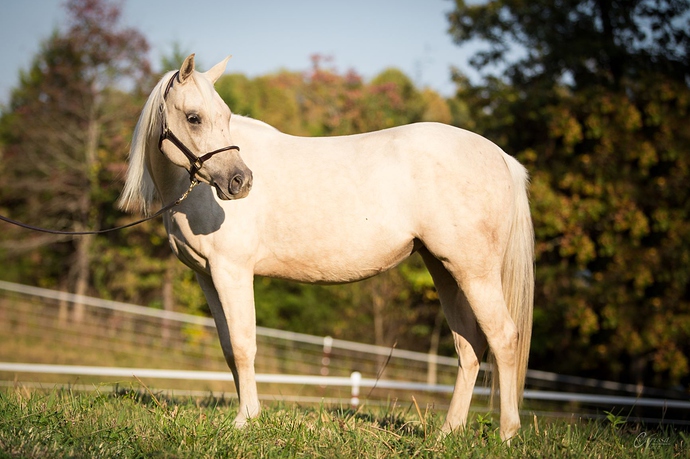 My favorite TB mare Shezagreatgal (Albert The Great) is back in foal to Saketini (Bernardini) for 2021. Sheza has had 3 amazing Saketini foals, and I thought about crossing her with a WB stallion this year, but as nice as her 2021 colt is…I just had to make another one. She caught on her foal heat (despite retaining placenta for 8hrs), so she will be due in January 2022. Such a nice mare…pretty to look at, easy to breed, lovely to handle, earned 100k and super mover.

Entice (Cherokee Run) is booked to Enticed (Medaglia D’Oro) at Darley. I love this son of MDO, he has great balance and his first crop hits the ground this year. Entice is similar in type, big framed mare, a bit long so maybe he can shorten her a little. Her 2021 St Patrick’s Day colt is a stunner, and huge, so we should get something like that next year. Enticed has a lot of support from Darley, so he should have some nice foals out there that sell well.

Bella Veloche (Sightseeing) had a nice, if small, filly by Saketini. She was a maiden, though, and I’m told she was a small foal herself (and grew up to 16.2). I am considering breeding her for a WB cross, but then again when Saketini is in my backyard for free it’s hard to justify the added expense of AI and possible multiple doses needed.

Bodacious Barb (Agnes Gold JPN) is due in late April with her St Patrick’s Day foal. She will probably go to Astern (AUS), also by MDO at Darley. Astern’s first foals are 2yos; his Australian crop just hit the track and seem to be doing well. He had a couple VERY nice 2yos at OBS sale last week, one brought $90k and the other $120k. Barb is G3 placed on turf, earned 130k, so Astern could be a good match to make a dirt or turf runner.

New mare, Jazils Dream (Jazil) is also due in late April to St Patrick’s Day. She’s a nice mare, earned 100k in 10 starts, but not very commercial pedigree. She will be bred to Saketini for 2022.

Could Be For Real (West Acre) is going to be a recip mare for my vet. No more devil colts from her!

Mom’s Image (Stormy Atlantic) slipped her pregnancy last year at 35 days and was unable to get back in foal. She will be bred back to Saketini this year, fingers crossed we have better luck.

Looks like you’ll have the thread mostly to yourself again next year!