So I got a new horse, and the first ride at home I slid off (not even jumped off), landed funny, and tore my ACL/MCL/meniscus. I had repair surgery on Oct. 1 and am now in physical therapy. My surgeon said six months until I can ride again. (WHAAAAAT?) That said, he had me out of my brace on my first post-op visit (1 week post op); yes, the brace that cost $1600 out of pocket. The PT said I was strong and doing well. I wonder if that six month estimate was a worst case scenario and if it might be cut down.

This is actually the second time hurting my knee. Five years ago while dismounting the green horse I was riding spooked and I fell with my foot still in my stirrup, eventually coming down on the inside of my foot, tearing the same features. Unfortunately, I did not get the same care I did this time around. I was on Medicaid at the time, and I wonder if Medicaid discouraged my intensive care because I didn’t get an MRI or surgery, just a brace for months. (Should’ve saved that brace!)

Anyhow, I’ve been discouraged and haven’t gone out to the barn much. A friend is riding Bennie for me. I really could use a lessee though. I’m not sure where to advertise. My trainer doesn’t have anyone right now in barn to lease him. I’m in Tucson, AZ if you know of a good Facebook group or other way to help.

Another problem, is due to that fall five years ago and another fall a year ago and just plain aging, I’m much more timid a rider than I used to be. I didn’t used to be so timid at all. My main fear is spooking. I found a therapist that deals in trauma, but may need a specific horse/sports therapist at some point if she doesn’t work out.

I am SO sorry!!! 6 months with no riding??? I am not looking forward to that scenario if that is what my ortho doc tells me next week! I might tell him to fly a kite

He already thinks horse people are a crazy bunch. I just had my MRI this morning and am waiting for results.

Not much help on the horse front, but can offer hugs and sympathy.

I am SO sorry!!! 6 months with no riding??? I am not looking forward to that scenario if that is what my ortho doc tells me next week! I might tell him to fly a kite

He already thinks horse people are a crazy bunch. I just had my MRI this morning and am waiting for results.

Not much help on the horse front, but can offer hugs and sympathy.

Did you tear your knee up too? I really hope it isn’t six months. Things have been moving forward pretty quickly, so hopefully that means I’ll be back in the saddle sooner. Good luck on your knee, too!

There are a couple of threads about ACL repair. I posted on them but will say again here. If you had your ACL replaced your knee will be very very weak and subject to tearing a second time until about three months from your surgery date. Ligaments do not have a lot of blood supply so if you replace your ACL the replacement needs time to heal and strengthen. About six weeks after your surgery it is extremely vulnerable to injury from twisting or sideways movement. I tore my ACL in February I had surgery in April and I was sitting on a horse at the end of July. I was riding for real and running in October.

I was pretty fit and strong when it happened and when my doctor told me it would be a year I about fell off the table. He raised an eyebrow and said the body can only heal as fast as it can heal. When you read about professional athletes healing and shorter time frames they had “help”. And he rolled his eyes. He was right. It was a year before I was back to normal.

Be patient and your knee will be as strong as it ever was. Probably stronger because PT will put you through the wringer! ðŸ˜€

I have had both ACLs repaired and the 6 month time frame is because there is a lot of twisting involved in riding, mounting, etc . You DO NOT want twisting until it’s fully healed. Sure you could find a doctor of PT to give you the green light in a shorter time frame or just do it without anyone’s okay, but why risk it??

I had (kinda still do) the fear after the first accident. I came off and as I was twisting through the air, I felt the ACL tear. I went many years without much riding because of this fear. I had to retire my horse (not the one that dumped me) and was horseless but a friend had a mellow former lesson horse that I started riding after I was cleared from my 2nd ACL surgery 18 months ago. He is just what I need and is now mine and I’m riding regularly. Still have fears in certain situations, but it’s slowly gotten better. I would recommend the book Riding Fear Free and there is a Facebook group related. Good luck!

I think six months is not as conservative as it could be, and is a fair assessment. Take your time.

Here’s my thread, if it helps:
https://www.chronofhorse.com/forum/forum/discussion-forums/riding-with-health-issues/10345259-acl-injury-human-update-5-6-19-had-the-surgery

My doctor told me 9 months minimum… And a year before I should think about ice hockey. My injury was a total ACL rupture + MCL involvement repaired by tissue from hamstring graft, but they didn’t know that until they opened up my knee :eek:

Of course, I didn’t listen and was on my trustworthy horse within 3 months… but it hurt!! I think it was a solid six months before I could trot painlessly. I would not be getting on a horse you did not trust implicitly.

Recovery is not an easy road. Make sure to stay ahead of the pain and take your meds/painkillers even if you don’t feel you need to.

Today marks a year and six months since the surgery. I noticed one day in August that I was squatting to put the hose on the spigot, and it didn’t hurt anymore. That was a plus. So much of how I’ve been moving has been default programming from protecting the leg. It will take a while to unwind that behavior.

I returned to hockey in September of 2019 – BUT I was very careful. It was not a painless process. I was also very one-sided with lots of atrophy from the hamstring graft.

Make sure you dismount carefully. I taught my guy to stand by the block and would dismount onto the block. It hurt for quite a while.

My knee is still rather weak. I can’t dismount easily from the wrong (right side) side of the horse. But I can ride, play hockey, and run. :encouragement:

Good luck… there is light at the end of the tunnel!!

Thanks for all your input. I didn’t have the hamstring graft; I had the cadaver tendon put in. My brother had the hamstring put into his knee, and he said his hamstring hurt longer than the knee. Like @beowulf , my surgeon didn’t know what he was going to do until he got into the knee in the OR. My knee feels ok. I don’t have any sharp pain, just stiffness and soreness. Unfortunately, unlike @Hilary , I am not in the greatest of shape. I need to get better about that. Maybe PT will be inspiring. One of the worst things is putting on shoes. I can’t cross my bad knee (the left) over the right knee as I’d normally do.

Today I went out to the barn to watch my trainer ride Bennie. It was a workout to groom and tack him. It’s easy to get soft. I’m also coming off a couple years of surgeries for breast reconstruction, post-mastectomy, so my body (and mind) hasn’t caught up yet. I really need to get back in shape. Bennie was great for my trainer. I also have a friend riding him 3-4 times a week to keep him in shape. Thank Goodness for her. 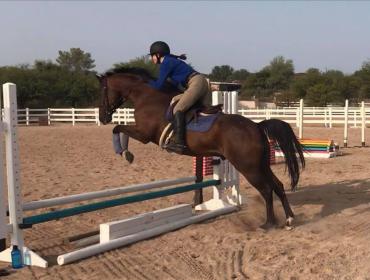 I have a torn meniscus now. My ortho said surgery was elective and that recovery could be anywhere from a couple of weeks to a couple of months. Since hunt season was just starting I opted to see how it feels in six months. I tore the same meniscus but on the outside instead on inside back in 91. Never had surgery and it rehabbed in about a year. I do treadmill work, elliptical and rowing. So basically keep on flat surfaces and reduce impact. I ice it after exercise and riding.

From a riding perspective I use a heavy neoprene sleeve. I find that while I am fine hunting except for steep hills, that my dressage work is limited particularly any lateral work.

Back in 2010 I was bucked off and tore my ACL. I had the patellar tendon repair, if I had it to do over again I would have picked a different graft option. It was probably about 4 months before I was back in the saddle again, but just lightly. I actually rode in my brace for quite some time. I didn’t use it for anything else but but riding. I had this weird mental block when it came to my knee. It was about 5 years before I could jump. Not jumping the horse, but like me actually jumping off the ground.

Trying to remember back, I don’t know if riding in the brace was my mental block or if I felt I actually physically needed it, but I was protective of it for a long time.

Now I’m fine, I had meniscus surgery last year, and I was back in the saddle in a under a month.

Sorry to hijack but I just tore my meniscus somehow and the doc (video consult) just sent me to PT. The PT said yep looks like a torn meniscus so come in 2x a week.

I’ve heard from a doctor friend to avoid surgery if possible. Neoprene brace, Advil, rest and 2x daily exercises. I need to get an answer from the doc but is it really 3 months no riding? Or longer? Should I push for an MRI? So bummed right now…

My doctor said four weeks for meniscus surgery. I would push for an MRI.

Sorry you’re going through this.

My doctor said four weeks for meniscus surgery. I would push for an MRI.

4 weeks to recover from the surgery? Yes I’ve heard it’s much faster but there’s a risk of arthritis developing, sometimes right away (!) so surgery is to be avoided, especially for return to sports.