Adventures of the New POOOOOONNNNEEEEE Thread!

I’m behind on chronicling the adventures of the new jumper pony.

Today was their first outing together to a schooling jumper show 15 minutes down the road. First round they had one stop when the pony made the (100% correct) executive decision to abort takeoff due to a miscommunication on the approach. They hopped it easily after a quick circle. Daughter wasn’t sure if she wanted to do 2 rounds at first – warm up ring got a little hairy – but emerged from the first round smiling ear-to-ear & replied “YES!!” when the trainer asked if she wanted to go again. Second round was perfect.

Doesn’t look like they made it into the top 5 rounds for their height division but they had an absolute blast. And despite a few arguments between them with daughter’s position being “No, we need rhythm & impulsion, not speed” and pony’s being “FASTEN SEATBELT, I THE GO GO PONY!!!” daughter is really making huge strides figuring out how to get ridability from the mare between the jumps. And more than one person at the rail had complimentary things to say about how cool a little mare she is.

I recorded video on daughter’s phone, I promise I will post some action shots once she pulls stills from the video. In the meantime, here’s my favorite pic of the day: 14hh mare hitching a ride to the show with another boarder’s 17.2hh OTTB gelding: 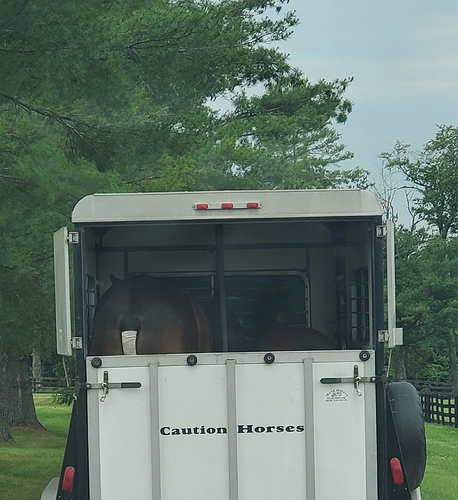 I love “GO GO POOOOONNIES” of all shapes and sizes. You are so lucky to find this one.

You are both so lucky and so is the pony. She will really teach your daughter to ride. (where is the applauding icon?)

Awwwwwww! Pony love is the best!

Heading back to the trailer. 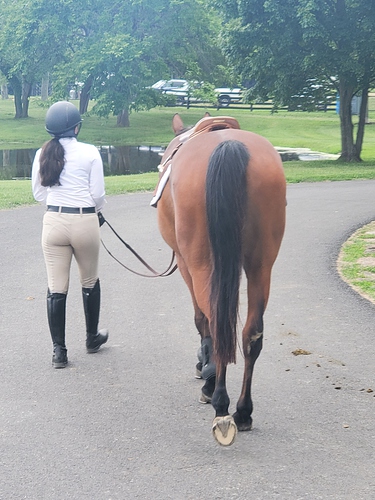 And an action shot. The big smile on the pilot’s face is what makes spending my life’s savings on horses worthwhile!

The stunning GP dressage stallion that boards in the smaller barn was enjoying his turn out this morning. A mare coming up from the arena was very excited about seeing such a fine stud muffin & her owner had to drag her past. We start down. Stallion tried to casually Ryan Gosling her with a gentle “Hey, girl” nicker & waited for the Go Go Pony to acknowledge him. She ignored it. He upped the ante by gliding a few strides down the rail, then stopped to see if she noticed him now. (Even bumming around the field this guy’s trot is like a 20 on a scale of 1-10. He seems to hover above the ground. ) I swear she rolled her eyes at him: “I cannot with these pretty boys with more product in their mane than mine!”

My best friend now considers the Go Go Pony is her spirit horse because she once broke it off with a guy who spent more time on his hair & had a temper tantrum once & threw his hair dryer.