Any advise for hand raising a single kitten…

Any advise or tips would be appreciated. I have never hand raised a kitten before.

He is eating every four hours and he drinks his formula super fast. We are using a 6cc syringe and he can pull down the plunger by nursing. He’s so small I can’t find a bottle small enough. (He’s 5 ounces now) He acts super hungry sometimes but not at every feeding.

Do you know about how old he is? The kitten I took care of was abandoned by his mother and was about 3 weeks old. I gradually mixed the formula with canned kitten food. I also wiped his bottom with a warm wet cloth. I was told it would help stimulate his bowels. Good luck with your baby! Remember we like pictures!

Use a warm cloth to stimulate him to poop and pee. I used a very cheap rough face cloth - it was more like mom cat’s tongue and seemed to work better than the soft cloth I was using. Doing gentle belly massages also helps them go. I made my baby kittens a little foil cake pan or pie tin for a litter box and used S’Wheat Step litter. If they ate it, it would not hurt them. I also kept mine in the bathroom where it was warm and would only let them out of the crate when I could supervise. When they got older I let them roam a bit more but when I went to work or to bed it was in the crate with a bunch of soft old towels that I would toss in the dryer so they would be warm - which usually got them right to sleep.

I only used the KMR formula as I found the others caused constipation. They sell the KMR kits with bottles in Petsmart and in Walmart as well.

If he is only 5 ounces he is either not very old or quite malnourished. Can the vet recommend a supplement to add to his bottle?

Good luck and bless you for taking this baby in. And yes to pics!

Thank you!!
I’m also using cheep wash cloths to stimulate him. And my older female dog is helping out too. When I can’t get him to poop, she can. After he eats I hold him and rub his belly with my thumbs and he loves it.

The towels in the dryer is brilliant, definitely going to do that.
He is now 16 days old and he was just 6 oz this morning.

He is walking quite a bit and is getting stronger. 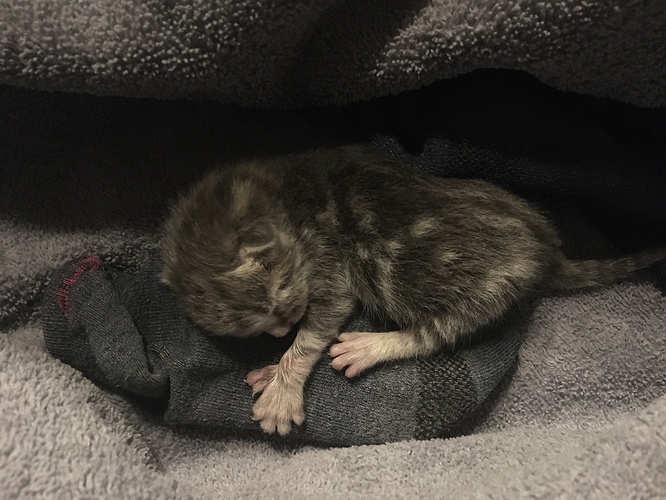 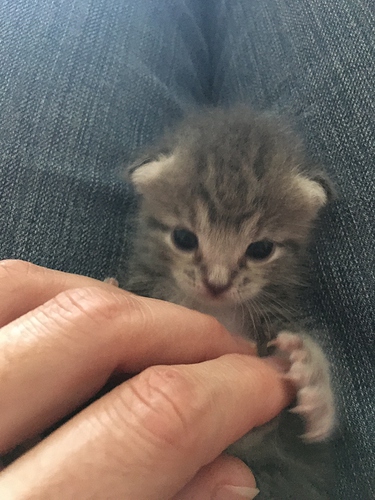 Is he polydactyl? Looks like he’s got an extra thumb on that left front foot.

Yes, he has two extra toes on each front paw. He sometimes sucks on them and it looks like he is sucking his thumb. He’s just too cute!

Adorable kitten - thank you for saving him !

When I raised an abandoned day-old kitten (Annie lived a normal lifetime) I used old gatorade (or similar) bottles, filled with hot water and wrapped in a towel to keep her warm. Otherwise very similar to what you describe

When I found my “Motorboat”, a teeny, barely had eyes open kitty, in a shoebox that I watched the old couple leave near my car in a McDonald’s parking lot- she didn’t like being left all alone,
so I put her up on my neck, under my long hair, and carried her around much of the day like this.
That little spoiled baby learned to meow loudly if you put her down in the box and ignored her.

They really like the warm companionship when they’re real little.

And yes an old female dog can be a great nanny to a kitty.

Thank you everyone. It makes me feel better to hear that so many others have done it successfully.!

And more pictures, because I can’t help myself. 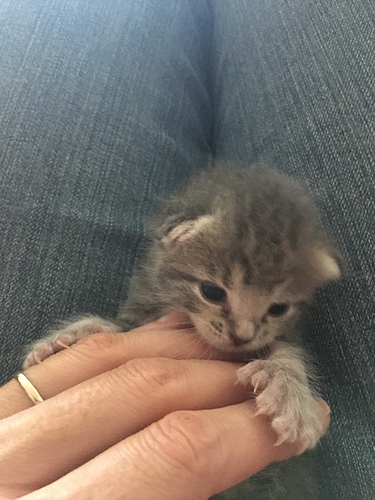 Have you come up with a name yet?

We hold kittens in one hand, over a garbage can with a liner, and wipe their little butts with Kleenex. Also, the liquid formula can give them loose bowels. I had better luck with mixing the dry formula. KMR is the best. Anything else seems to cause issues. There are kitten bottles small enough, but you have to make an x on the nipple with scissors. It can be very frustrating to get them to take milk from a bottle but it’s worth trying until they get it. The milk should drop when the bottle is upside down so the kitten can get it easily. Use one hand to hold the kitten in position, belly down, and the other to keep moving the bottle to make sure they suckle straight, rather than on one side of their mouth or the other. It’s a battle at first, but easy when they get it. A syringe can be dangerous. 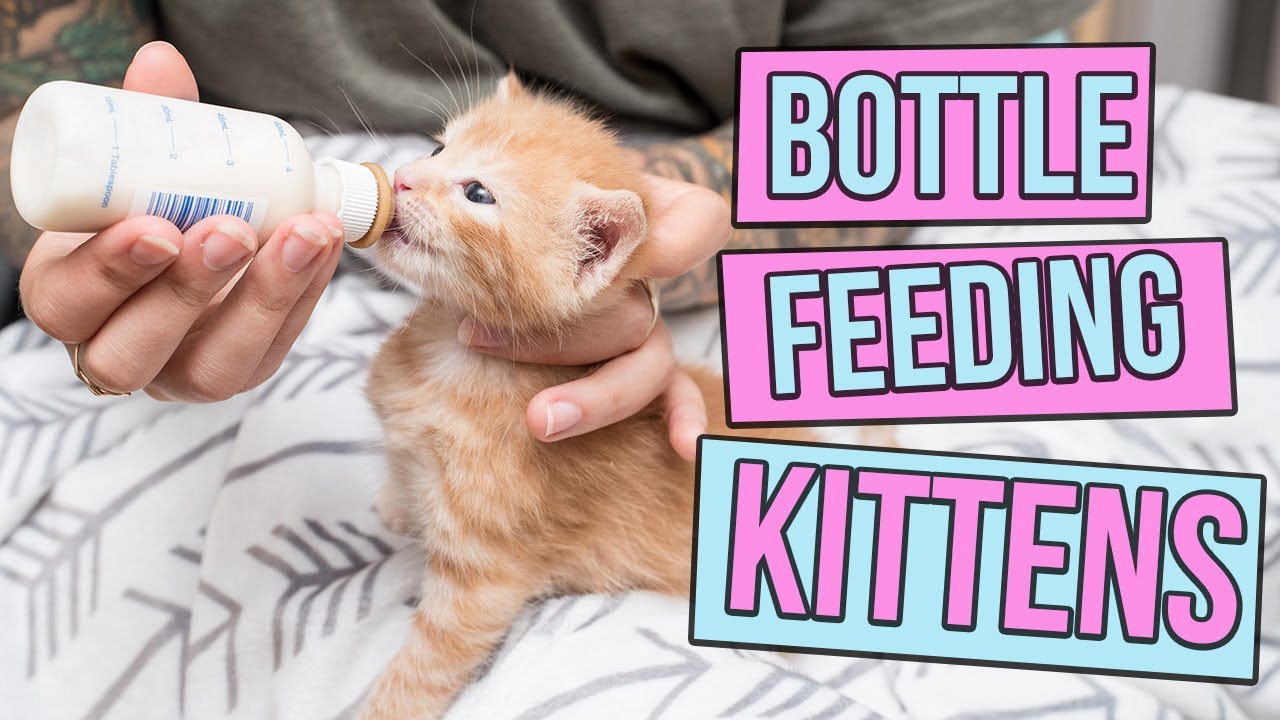 We’ve raised several, but kept only one. He was a single, too, and about the same size as yours. If they can’t retract their claws, they’re less than four weeks. Our Jacob was only 2and 1/2. 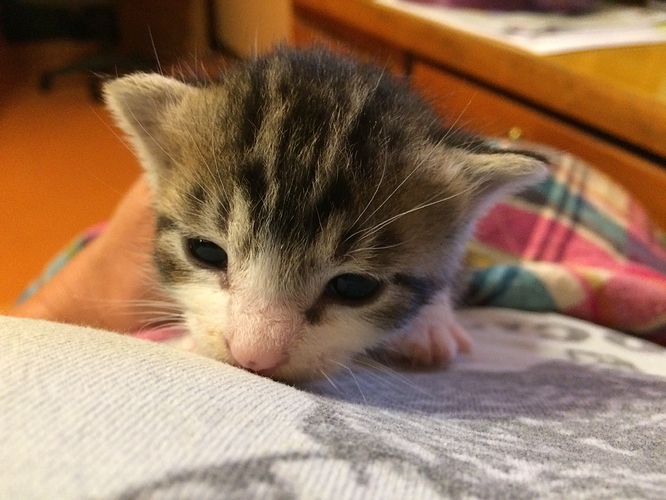 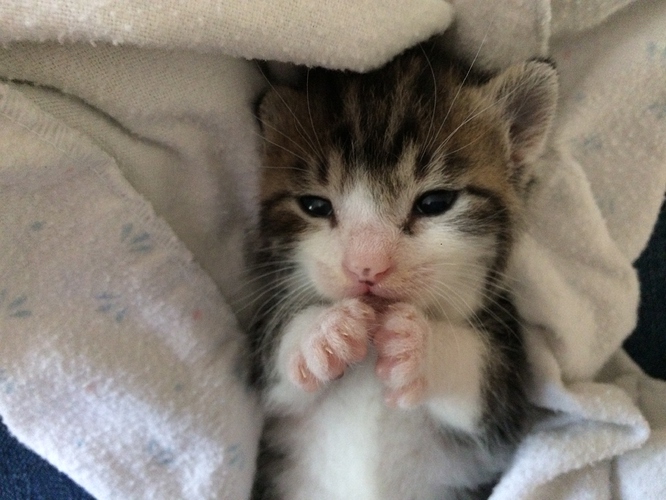 He’s 3 and 1/2 years old now and the most demanding, brattiest, and most affectionate cat we’ve had. It’s worth all the trouble! 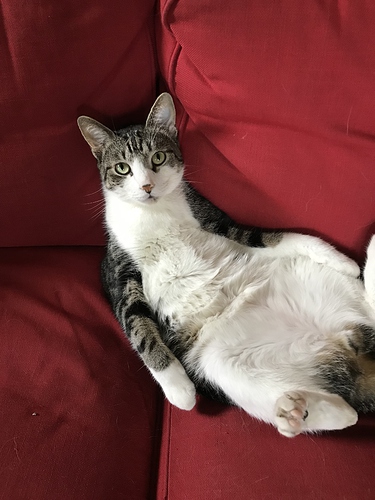 How lucky that little one is that you found him and cared for him! I second all the good advice you’ve already been given. Mr. chai and I raised a kitten whose Mom popped him out on a saddle pad at the barn where I was keeping my horse, then ran off! We named him Pompeii and we raised him from his first hour. We bottle fed with Queen’s milk, then stimulated his digestive system with a warm, wet face cloth, giving him a ‘bath’ after every feeding. He was our dry run before we had kids and he was such a hoot. I don’t think he ever knew. he was actually a cat, because he would jump on my shoulder like a parrot, run down the driveway to greet the car and ride on the driver’s side mirror, eating McDonald’s french fries on the way to the house.
I had to say goodbye to a dear little rescue today who was diagnosed with cancer in August, and today was the day when I knew our care and comfort had gone as long as it possibly could before she would be in pain. I wish I was closer to you because I will now be looking for another kitty to love. I wish you all the best with your new little bundle of joy. Thank you for being kind and helping that little guy.

I think I’ve seen that type of syringe. Those are cool. When he’s older, maybe he’ll transition to a bigger bottle to make it easier to feed him.

We used a heating pad and covered the cord that was within reach inside his crate for Jacob. This last batch had a small blow by heater (safety kind that shuts off if knocked over). Not too close, but it can really help.

Oh he is teeny. And SOOOO adorable! If I had him nothing in my house or my life would ever get done, I would be playing with him or fussing over him so much. lol

As far keeping him warm, they have those warming pads for pets (nothing with wires a teener beener could chew on)
Amazon.com : Snuggle Safe Pet Bed Microwave Heating Pad : Pet Supplies

Or if you are cheap like me a baked potato in a thick sock.

Keep us posted. Wed love to see them grow up.

That kitten is sooooo cute. But Jacob, what a dude. I thought he was going to be an amputee. What a happy ending.

His name is Clint. (Marvel movie character, we are gigantic nerds )

You’re getting great advice. A couple of other things:

Be sure you’re feeding him every 2-3 hours, even at night, yes! General rule of thumb I always follow: up to two weeks, feed every two hours; at three weeks, every 3 hours, at 4 weeks, every 4 hours. By Week 5, he should be starting to eat more solid food on his own. If he hates the bottle, I used an eyedropper when I raised my preemies, until they got big enough to do the bottle. Yes, it takes forever that way, but it’s better than not eating properly.

I used a heating pad with mine - wrapped in a towel, on the low setting, with their box/basket on top of the towel. When I traveled, I used a microwavable heating pack. They can’t regulate their body temperature until they’re about 4 - 5 weeks of age.

Mine were so little that I got those 100-packs of cotton face wipes/make up removers and used those for stimulating them. Cheap and disposable. Be sure to do it on a towel or something, because if they get the runs, it goes everywhere!

You can put a small stuffed animal in the basket with him to mimic another kitten. They love to be held - it makes them feel safe, and actually reduces stress and makes them less likely to get sick.