B Wayne Hughes of Spendthrift dies 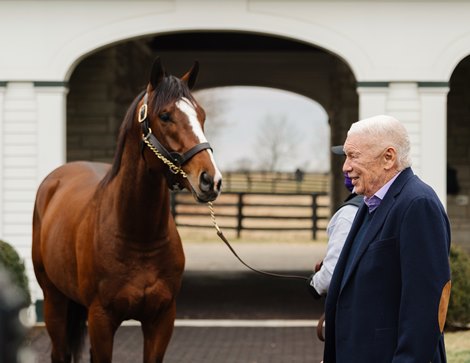 Hughes returned Spendthrift Farm to prominence and pioneered the innovative Share the Upside program for breeders and MyRacehorse.com for racehorse ownership.

Such a pioneer in so many ways. He’s left big shoes to fill.

Condolences to his family and friends.

I’ll be thinking of him Saturday when Infinite Empire runs at Santa Anita; 5 1/2f MSW, post 5, Race 1. Co-owned with Spendthrift and My Racehorse which B Wayne Hughes championed.

I love that Got Stormy, who is a product of what he was a pioneer of, won the last G1 he probably saw flying his silks.

I didn’t see anything about continuing operations. I sure hope that this is not the end of Spendthrift. The loss of Hughes is awful, but it would be a real shame to lose what he built.

A Mo Reay had been entered this morning for Sunday’s Maiden Special Weight race at Saratoga, but later was removed from the entries by NYRA’s racing office at the direction of the stewards, because the legal paperwork submitted by Spendthrift Farm, our partners in the filly, to transfer ownership to the farm’s owner, Eric Gustavson, had not been fully processed, following the passing of the farm’s founder, B. Wayne Hughes, yesterday.

So far, A Mo Reay was impacted for her race this Sunday at Saratoga. Infinite Empire is also racing on Saturday at Del Mar but no word on her. I tried wading through the filings and was not successful. In the group of 14 from KEESEP20, some are in partnership with Spendthrift and some are not. I suspect that A Mo Reay is owned in partnership while Infinite Empire is not (since I don’t own them individually, I don’t have easy access to their individual offerings which indicate if there are partners and who they are).

Collusion Illusion is racing on Sunday but he is not owned in partnership with Spendthrift.

Probably the next ‘big’ impact would be Got Stormy who is in partnership with Spendthrift but her next race is September 11.

Another possible ‘big’ impact might be Tizamagician who is entered in the TVG Pacific Classic this Saturday but I don’t know if Spendthrift is a partner.

This article contains good news- Spendthrift’s new owners are his daughter, Tamara, and her husband Eric. The tradition continues! 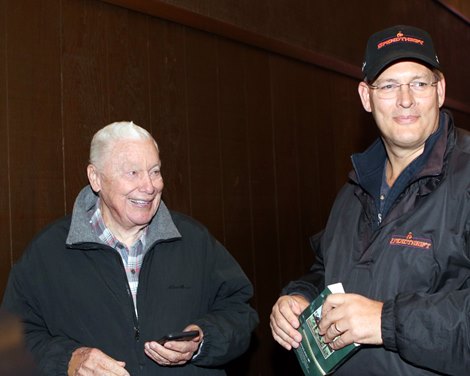 Ned Toffey on the Impact and Talents of B. Wayne Hughes

Ned Toffey has been only general manager of Spendthrift Farm under Hughes' ownership.