Hi, is anyone willing to share pics of their barns within their pastures as opposed to being separated structures? I’m looking for property design ideas and I think I’d like to have the barn within the pasture, but I can’t find many pics/examples from people who have done this.

My barn isn’t in my pasture but is entirely surrounded by my dry lot.

Pros - if a horse gets out of the barn aisle, they are fenced in still. I can use my stalls as run-ins with Dutch doors, so I don’t have to let them in/out on a schedule.

Cons - every time you need to make a delivery to your barn, you will need to move horses. And that eliminates anything (for me, anyway) like a hay delivery when you are not home, because I don’t want to trust that my hay supplier can move horses safely, etc. It is definitely inconvenient in that respect. Horses are also able to touch your barn if they want, which can be bad if they chew, scratch themselves, etc. Also, no option for decorative flowers, etc.

This isn’t a great photo - taken for the cute dog sitting in the sun, not the barn. But you can see the fencing around the barn. 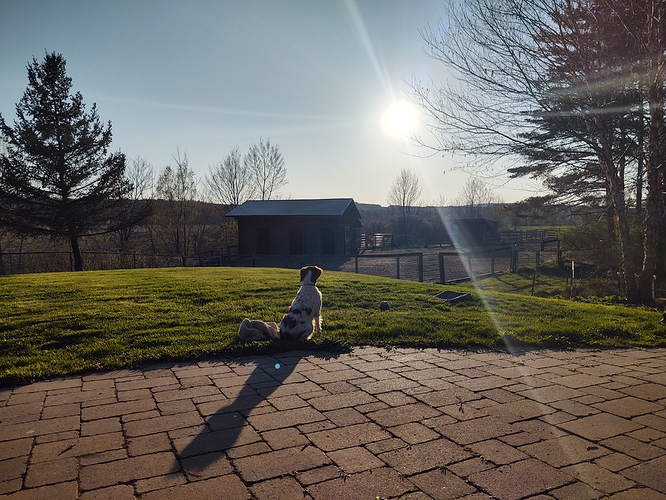 I know someone who had a roofer get trapped on top of their barn because the horse in the pasture which surrounded it decided to remove the ladder. 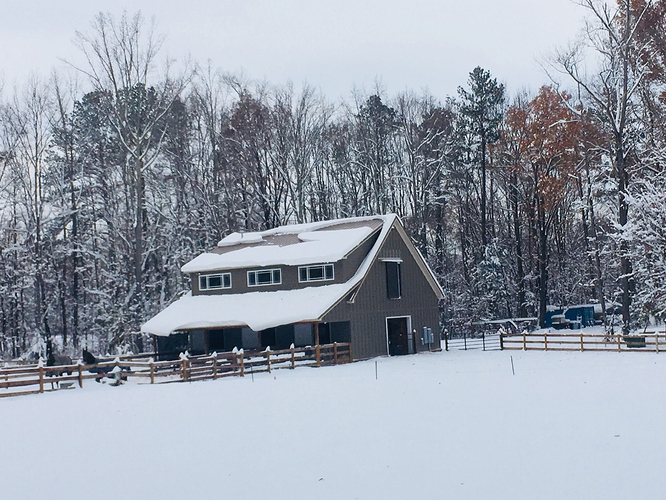 My horses have access to 3 sides of my barn. I wanted to still have easy access to the barn without having to open gates for hay/feed delivery, for the vet and farrier and for emergency service vehicles to have easy access.

One side of my barn has a large paddock fenced around it. Beware exuberant horses and doorways with glass. 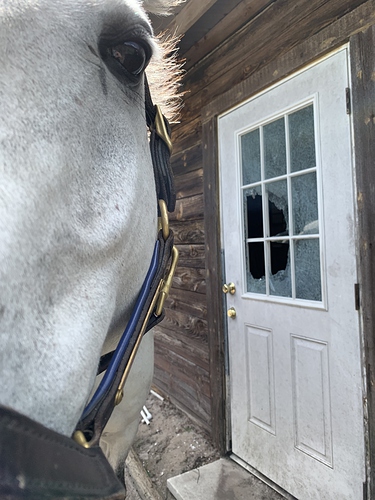 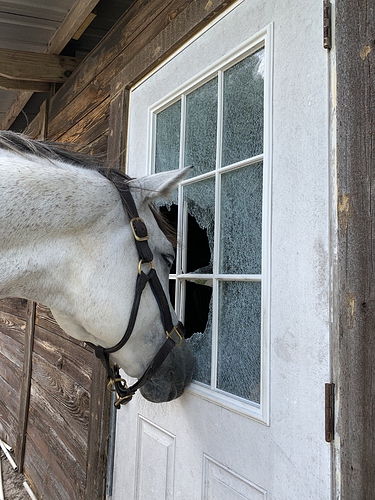 My barn is attached to the corner of my garage, so I can get from the house to the barn without going outside. It has pasture/paddock on three sides. The fourth side opens to the driveway, providing easy access for vet, farrier, feed and hay delivery, etc.

That horse looks innocent to me!

That’s his story and he’s sticking to it!!

I have a small barn in my pasture. I do like that it makes feeding time easier because everyone has learned to go into their own stalls. But I set my stalls up with sliding doors between them that are always open so nobody gets trapped if they go into the wrong stall. My barn is always open so it doubles as a run-in, although I have the ability to close them out and leave them with an overhang for shelter.

For me, the biggest downside to this is that I have not built a road into my barn so I can’t get my truck to the barn when it is really muddy. An upside is that if someone is stuck in on stall rest, their friends can come visit them during the day. Stall rest happens in the one stall that is removed from the flow-through so there are still no problems with being trapped. I only have three stalls but the flow-through system could work with more stalls.

My barn has a dry lot on the side with the stalls. The back aisle opens to an alley behind the barn that runs from the dry lot to the closest pasture. That pasture has two gates that lead to two other pastures. This way the horses can be turned out by opening gates instead of hand walking.

The front and side of the barn are not accessible to the horses and are on a gravel courtyard, so easy to access for people and hay and feed deliveries. It’s a great set up.

We have a dry lot on one side of the barn. The stalls open into it. From the dry lot we can open gates into three different pastures. The small dry lot is great when you have one on limited turnout and the gates to other pastures make it easy to turn the horses out.

Gosh your barn is pretty! What’s up in that shed dormer? An apartment? Or just windows for the loft?

Thank you! My husband and I designed it.

Only part of one wall is attached to the pasture so I have access to all deliveries and house guests.

We have a shed row barn that is fenced on 3 sides. As others have mentioned, it allows access without having to have anyone enter into a “live horse” area.

What I love about this barn is that the shed row is a proper 12 foot aisle. The open side has 4 foot wall with sliding doors in the middle, so it feels like a center aisle barn with better ventilation. Cold isn’t too much of an issue in NC, and the full 12 foot overhang/aisle and half wall provides good protection in many a hurricane. We have two “gates” that are generally open and up against the wall. One is at one end, the second is in the middle, so when shut the 2 horses have access to two stalls and 12’ x 24’ of aisle from the weather. we have about 20’ on 3 sides from barn to paddock, with 3 paddocks/pasture off of that enclosed area. Does that even make sense? I hope so!

My setup is similar to @S1969
Horse in pic standing in the drylot, front slider to barn partly open.
Pastures open off drylot, Dutch doors to stalls (out of sight on barn’s East wall) inside drylot so horses can go in/out at their pleasure.
Agree with @ThreeWishes about unprotected glass.
Windows on West side of barn, facing the drylot have protective coverings of hardware cloth. Added after horses removed the screens, leaving glass exposed. 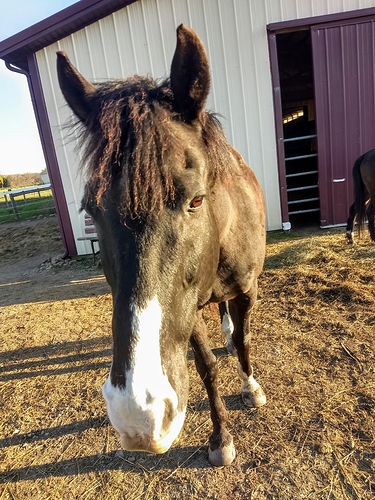 For those of you who leave your stalls open/available to the horses in the attached paddock space, do you ever have any issues with multiple horses in one stall?

I am renovating my barn so all four stalls will have in/outs and they all will connect to the dry lot (which can connect to the pasture). I’m not quite comfortable yet with leaving open access to the stalls, especially as the in/out spaces are not huge and some of the gates between the in/outs and the dry lot will be smaller (two of them only 4 ft).

Sorry, don’t mean to co-opt this thread but seemed relevant!

Not the best picture but the barn is behind the horse. Dry lot fenced with round pen panels comes directly off the barn with a lean to and opens into the pasture. I can’t imagine not having my barn attached to the pasture. 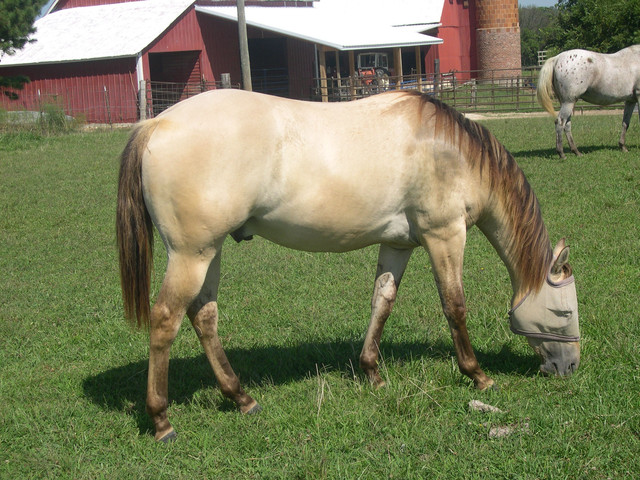 My barn is set up like jawa’s where the horses have access on 3 sides. One side with the stalls have Dutch doors going to a limestone run out. The other 2 sides are one pasture.

From the run I have 2 gates that will each go to a different pasture once the second one is finished. With the price of lumber that will be next year since I’m not doing all day pasture turnout.

I wanted to have a door accessible for hay delivery & bringing feed, etc up to the barn. It’s much easier to drive the car up to the barn to unload even for little stuff.

For those of you who leave your stalls open/available to the horses in the attached paddock space, do you ever have any issues with multiple horses in one stall?

No, BUT it can happen. I have 3 full sized mares, a small pony gelding and a mini mare. The mares all love the gelding, and 2 of the 3 will share a stall with him (he and my older TB mare are typically in the same stall.) The herd is well-balanced and while there is a definite pecking order, they all know the routine and their position so it works very well.

That said, when I first bought this farm, the neighbor had previously boarded broodmares here, but they did not use the Dutch doors and the paddock. They stayed here for a few months after we bought the farm and we tried using the Dutch doors, but there were a couple of dangerous situations where the lead mare would boot the other mares out of their stalls, and if they didn’t move quickly enough she would go in with them. Once she kicked another mare and the door, leaving a pretty big hole.

It’s not an ideal setup, for sure. It only works in certain turnout groups. In the past when that was not a safe option, I just kept the doors closed after they were turned out.

I have considered ways to modify the barn setup but there really isn’t any other option, other than not using the barnyard as a dry lot or using stalls as a run-in. Which also has its pros and cons.