CC on H&C On Saturday.

It is with great sadness that we announce that Ms. Poppins ridden by Alexandra Knowles (USA) and owned by Katherine O’Brien has been put down whilst competing in the CCI-4*-L section at Bramham International Horse Trials. The horse retired on course between fences and was transported back to the stables by horse ambulance to be assessed by the veterinary team and, as a result of irreparable injuries, the decision was taken.

Our thoughts are with the horse’s connections.

A second horse was euthanized. From Eventing Nation:

“The Japanese Equestrian Federation’s Ventura de la Chaule JRA was also put to sleep after a fall with Toshiyuki Tanaka at fence 7B, the Bramham Leap. Toshiyuki was uninjured in the fall.

The 13-year-old Selel Francias (Diamant De Semilly x Hand In Glove), who was placed 16th after the first phase, was 7th in the order on cross county this morning. This was the Japanese rider’s first season with the gelding, who was previously ridden by Nicolas Touzaint and most recently compatriot Atushi Negishi.

The Bramham Leap was a skinny arrowhead followed by a ditch and brush at the B element. After a number of issues the entire combination was eventually removed from the course.

The entire EN team sends our condolences to those who loved these horses.”

I think there was too short a time between the Nations Cup and Bramham…not enough time to recover …the short time was mentioned in an interview with Law …and they decided to go forward anyway.

After a number of issues the entire combination was eventually removed from the course.

I wonder what those issues were?

An arrowhead to ditch/brush sounds like the approach to B would not allow sufficient gallop/power/speed which is usual for that type of fence. We shouldn’t be show jumping a ditch & brush. 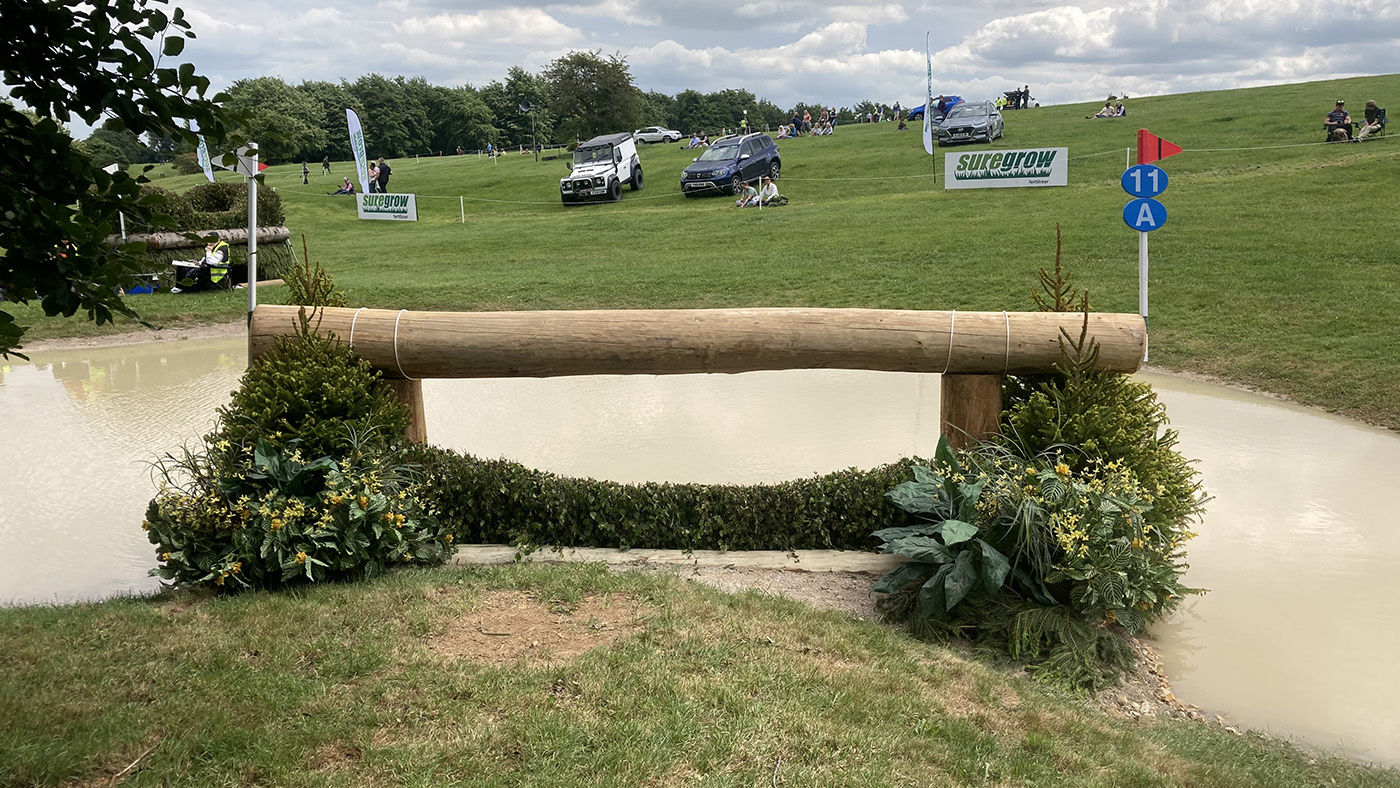 Take a virtual walk round the Bramham Horse Trials cross-country course for the CCI4*-L competition, designed by Ian Stark

An interesting reflection from the course designer Ian Stark: https://www.horseandhound.co.uk/features/bramham-horse-trials-cross-country-ian-stark-791624

Really interesting that Ian Stark keeps commenting about not wanting to “dumb it down” and people “not being prepared.” Yet one of the best event riders in the world is currently paralyzed from the neck down from a fall at Badminton, and I’m going to assume the Japanese rider’s horse broke it’s neck (or something equally horrific) on the 7B element after 3 other horses fell there. I’m not sure one can blame that on lack of preparation, especially after looking at 7a/b on the virtual course walk. A skinny arrowhead to a skinny ditch with a high rail? It’s an invitation to flip a horse if they don’t get into the combination just right.

I wish a lot of these upper level course designers would take a page out of Derek DiGrazia’s book… he builds big tracks that also don’t injure horses when either they or the rider screw up. Are they “softer” than maybe Ian Stark would build? Probably. And I think that’s more than ok.

What strikes me is the difference between a course that is injuring people versus a course that is penalizing people. About half the field, maybe more, had some type of issue at the Park Question in the 4* at Landrover. But I believe there was only 1 fall, and no injuries. The penalties were mostly stops or drive-bys of the second element, and there was an easier option people were choosing not to take.

To me, as a newbie to the sport, I want to watch upper level riders negotiate a technically challenging course without worrying that horse and rider may die. It seems like there is room for a challenging, questioning track that rewards a thinking reactive rider without injuring the horse/rider combinations that aren’t quite the winners.

I watched the first few riders on Horse & Country TV, until the horse that was euthanized. You can see that ride all the way to him taking off at the jump - they snipped it before he hit it.

It was really gut wrenching knowing the outcome in advance, then listening to the commentator cheerfully prattling on after they cut away. I had to turn it off.

My opinion when I first saw the fence photos stands. I don’t think we should be asking our XC horses to show jump these bold XC questions. So then watching it on replay, they weren’t show jumping it. It had a weird wiggly approach which forced riders to keep control, then they powered up to jump the skinny very boldly for a bold and powerful two strides to the ditch and brush skinny.

The first horse was backed off and had a funky jump at the 2nd, so I expected it to get worse. But the next few all answered their riders and it looked easier. Then came Ventura an Toshiyuki. They seemed ok over the previous combination, a trakehner 3 strides to and angled skinny, and they had power to the skinny, but the horse was not sure of the question immediately so landed, did 2 and a half strides and took off.

That’s a problem. The horses are trained to do skinnies. They can do ditches etc. But if we give them no time to read the fence, and they aren’t 100%, it shouldn’t be so punishing. I thought “would the horse be able to stop or run out so it’s ‘safe enough’?” which is what all these skinnies were supposedly meant to achieve. Well, not on a bold 2-stride, not really. There’s not a fence to “stop against”, it’s a ditch. And a half-stride take-off means a fairly sure hit of horse into fence, followed by falling into the ditch.

Of course we’ve seen that happen at the Cottesmore Leap but for the most part the approach was long and everyone had plenty of time to see and assess the jump, maybe even to refuse if needed. I didn’t like it much when the course designer started putting skinnies on the landing of it, but again, a drive-by was more likely since riders knew they had to have a powerful go to the ditch/brush regardless.

I read Ian Stark’s piece. I’m of mixed emotions. After looking at the course photos, I felt this wasn’t a classic bold course like I’ve seen in lots of his others. And not as he claims it is in his piece. It was replete with skinny-timbered frangibles and hanging logs/ditch fences; to me those are similar (airy single rail) but we are telling our horses, for some the horses are supposed to do the bravest boldest jumps ever, and for some that look basically the same, the riders don’t want 11 penalties so show jump this please.

Also seeing the combinations on video, there were many approaches that obscured the horse’s line of sight on the B or C element.

There was another combination I didn’t like, similar to the skinny/Ditch combo at 7ab. It was a water combo, first a hanging log in with 2 metre drop, then a curvy S-bend line: first onto dry land uphill mound to jump a max oxer with max brush that the horse can’t see early, and can’t see over (approached without speed or a chance to generate power coming out of the water) then back into the water to a brush arrowhead. It’s the B element I don’t like, the placement and design of that max oxer is inviting the weak canter and/or distance and the horse not reading it correctly, having barely seen it. How do they assess the width? It’s all covered in brush. How do they run out?

Anyway I am wary of any course designer making a statement in the immediate aftermath of a death effectively saying, “I can’t design it better, the competitors are unprepared and we should increase qualifications.” Well, I’ve heard that before…

Yet one of the best event riders in the world is currently paralyzed from the neck down from a fall at Badminton,

Nicola Wilson's recovery is progressing well, with sensation and movement returning to her lower and upper limbs, following her fall at Badminton on May 7.

“Wilson’s recovery is progressing well, with sensation and movement returning to her lower and upper limbs.”

fingers crossed for her

Some of these jumps are - if you miss, you’re f’d. It shouldn’t be that way. You shouldn’t be having galloping at fences that a small miss can kill you.

I agree with Ian Stark courses shouldn’t be dumbed down and rider responsibility and skill needs to be at the forefront but I think he is wrong in this account here he thinks the course was not the issue. Some of the lines were definitely the issue.

Watching UK events this year has become a train wreck. I have felt sick more than I have thrilled. Then going to social media and seeing hundreds of comments for people coming for our sport to be cancelled. It’s very scary to see that.

So, using Stark’s logic, removing fences from the course after horses or riders are badly injured or killed while jumping them, is admitting that no riders in the event are properly prepared? That’s hard to swallow.

As much as I have enjoyed spectating over the years, it’s getting tough to watch. I don’t know if it’s me or the courses. Kentucky was fun to watch. Badminton, at times really wasn’t.

Evented in my 20s and 30s, then focused solely on dressage. I loved eventing but, just like with racing, I can no longer watch the sport live. If all horses make it out uninjured and alive, I can watch the replays.

Condolences to both teams who lost their partners.

I watched it and my very amateur opinion is that the A element took away the momentum and some of the horses were peeking down at the big ditch under the B element and didn’t have the power to get over B.

I think the problem may have to do with there being a road ( colour and surface difference), before the ground line for the 7b ditch. Have y’all trained for that ?

I think too, like my friend mentioned when we were talking about it, that the whole line just required a different canter than the jump needed. A ditch and brush is a gallop fence, whereas you had to almost have a showjump canter through there. It was only a 2 stride and off a turn.

I think Ian Stark is all about creating courses that require bold riding. But the bold riding needs to required at the appropriate fence types IMO.

I have nothing but love and respect for Ian Stark, but I don’t think he’s full correct here.

I find it interesting there is so much push for the return to the big bold xc of the past I think Badminton this year was proof that it isn’t the more horse friendly option. I would much rather see 20’s popping up on the scoreboard than horse falls

I find it interesting there is so much push for the return to the big bold xc of the past I think Badminton this year was proof that it isn’t the more horse friendly option. I would much rather see 20’s popping up on the scoreboard than horse falls

Have a look at the stats for Badminton. They are perhaps not as bad as you recall.

IMO very inexperienced opinion at that level, it seemed to me the fences at Badminton were just that little bit too high, so if a horse was tired and careless over a fence they fell. Whereas normally you see them slide over….maybe have an awkward landing.

This is an interesting take from Piggy: https://fb.watch/dF-c59XtnO/