I recently got some bridle plates and they came with rivets. Is this something I can install myself? I’m no where close to a tack store. They sent Jiffy Rivets for self installation but my fiance looked at them and panicked.

Yes. Mark the holes from the plate on your leather with a pen or pencil “tap” (enough to mark the spot). Take your hole punch and punch the holes - make sure you have the right diameter set on the hole punch. Line up the plate with the holes, place the bottom part of the rivet through the holes and plate, then place top parts of the rivet through plate holes. Cover with a rag or washcloth (prevents dents or scratches). Then with grips or a hammer pinch or punch them into place. Make sure to keep the rag over the plate hardware so it doesn’t scratch.

You can also order Chicago screws quickly and cheaply on Ebay if that’s more your speed.

You can also order Chicago screws quickly and cheaply on Ebay if that’s more your speed.

Brass Chicago screws can also be purchased on Amazon or I believe even Dover has them.

Edit to add - Tractor Supply has them too.
Make sure you buy the right length. 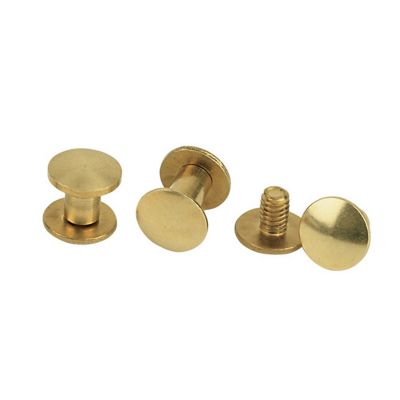 This is how I did mine! I would like to add though, I installed my first couple on a small anvil on my my wooden work bench and the rivets didn’t set correctly, yet when I installed the next ones on the same anvil on my concrete garage floor, they set fine. So, I would recommend setting them on a very sturdy surface!

Also, if you are not comfortable installing them yourself, some tack shops will do it for you.

Re: Chicago screws, I once ordered a few plates that came with Chicago screws and not only were the screws too thick for my crown pieces when screwed as tight as they would go, but the holes they would’ve required would’ve been much larger than rivets, which I think could’ve caused more wear to the crown over time due to leaving the area surrounding the holes narrower/weaker (if that makes sense). I’ve also never cared for Chicago screws in general because they seem to come undone on their own a lot (though I hear clear nail polish is supposed to help with that; I haven’t used them since to try that out myself).

Ugh! Tell me about it. I got a beautiful nameplate to put on my neck strap and have yet to find Chicago screws that fit the holes. All of them are too big, too short, etc despite my repeated measuring. Finally got tired of it and just sewed the thing on with golden thread, haha! Going forward I’ll never forget to ask the manufacturer for a set whenever I order a plate.

great idea! why do them make some with pinpoint sized holes?

Practice on another piece of leather first to make sure you can line up your holes straight.

Another vote against Chicago screws here.