Has anyone used Bugatti on their mare or have a Bugatti offspring. Would like any thoughts about what he contributed, if frozen was used - did it get the job done. My best breeding buddy is going to breed one of my mares to Bugatti to keep, hopefully getting a filly. She is out of a mare I bred and she bought from me about 15 years or so and has been a fabulous producer. I fell in love with this filly and had to have her, so bought her. She is a great granddaughter of my foundation stallion, so I’m elated to have the line go on. Any comments?

@J-Lu Have you heard of other Bugattis with the same issues? I know of mine and one other. Curious.

are you talking about connection in the neck or throat latch? I heard this can be tricky with them.

are you talking about connection in the neck or throat latch? I heard this can be tricky with them.

Unfortunately not! My boy was wonderful to ride but had issues chronicled in this thread: DSLD "diagnosis" in young, lame horse -- UPDATE post 130, he's gone. The breeder had another one out of a completely different dam line with the same thing. 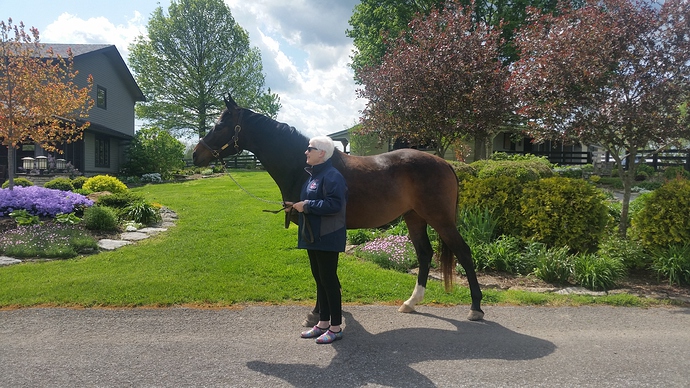 So sorry for yours (and Libby’s) loss.

Is this the same horse that Libby mentioned above… or another?

Another, this lovely youngster showed so much promise too. Winning successfully on the line before starting his short lived dressage career. My heart is still breaking to lose this one.

@cheektwocheek So sorry for your loss!! Hmm I was thinking the two that I know could be a coincidence (still enough for me to avoid the bloodline personally just because my personal experience was so devastating), but with yours as a third and Bugatti known for producing elasticity, I do wonder…

@Libby2563, I don’t know of any more. I wonder how many were not diagnosed since there has only recently been methods to diagnose the condition. I am a bloodlines geek and if you and @cheektwocheek would send me links to All Horse Pedigree of your horses, I can go through the dam lines to see if they have anything in common. I wish someone did a pedigree analysis on this insidious disease to identify the likely WB carriers. Has anyone done this to your knowledge? While tedious to anyone else, this sort of analysis is so interesting to me.

@cheektwocheek, I’m so sorry to hear this. Your boy was gorgeous!

I wish someone did a pedigree analysis on this insidious disease to identify the likely WB carriers. Has anyone done this to your knowledge?

Not to the point of reaching any sort of conclusion, to my knowledge. I included Remy’s pedigree with his DNA sample that I sent U of Wisconsin for their study, but based on a 2019 post on their website it seems they’ve been focusing more on Pasos. That post also says they’ve determined it to be simple Mendelian inheritance. If that’s the case wouldn’t a test be fairly straightforward? You’re the biologist—tell me if I’m missing something there! Here’s the post: https://www.vetmed.wisc.edu/lab/corl/dlsd-study/

I’ll send you his pedigree!

Correct me if I am wrong but I read somewhere that they had found the location of the gene that caused this in Paso’s but it didn’t seem to be as straight forward in other breeds. I suppose they are studying Paso’s because it is probably a smaller gene pool, a greater percentage of horses are affected and they know where to look.

Equine degenerative suspensory ligament desmitis (DSLD) in Peruvian Paso horses typically presents at 7–15 years and is characterized by lameness, focal disorganization of collagen fibrils, and chondroid deposition in the body of the ligament. With...

I thought this was interesting. I am not a scientist so some of this is over my head but it does show what a complex issue this is. Not as easy as identifying HYPP or WFSS. Gene expression plays a role in the development of this " disease" so that makes things harder. Still even though there is anecdotal evidence I would be wary of certain individuals in a pedigree.

Not as easy as identifying HYPP or WFSS. Gene expression plays a role in the development of this " disease" so that makes things harder.

That was my understanding too from when I did all my research in 2017, but the 2019 article I linked above (from one of the same authors) says, “Data from the Comparative Genetics Laboratory at the University of Wisconsin-Madison suggest that DSLD in the Peruvian Horse is most likely a recessive Mendelian genetic disease, meaning that there is a simple mode of inheritance where horses with two copies of the mutated gene develop the disease and horses with only one copy if the mutation are carriers of the disease and are healthy clinically.” (Link again: https://www.vetmed.wisc.edu/lab/corl/dlsd-study/). Also not a scientist so

I hope they are able to fund more research on this. I do remember reading something about a possible gene marker? for Paso Fino’s that were affected but that it did not seem to be applicable to the DSLD seen in other breeds. This was a while back and I cannot find the source so I have no idea how current that research was. The study you read may have been later information.

I do have a friend whose WB mare developed dropped fetlocks when she was pregnant which may or may not have been DSLD. I do not think either of her parents were affected and her sire was widely used. My gut feeling is the DSLD seen in non Paso’s is not going to be as easy to find as a simple recessive gene. But I could be wrong.