Can someone please educate me on this TB pedigree?

I know nothing about TB bloodlines - please educate me! Arab and warmbloods have been more my thing.

I just put a deposit down on a lovely 5 month old filly as a sport horse prospect and am curious about her TB lines. She’s a beautiful filly and has three nice gaits. Other half is Friesian.

This is her dam:
https://www.pedigreequery.com/fame+galore

Thanks for any insight! Photo for tax! 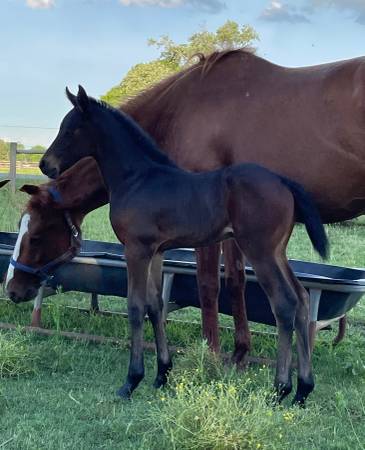 Well it’s not a “local to me” pedigree, but it is filled with a good selection of well respected TB sires, all quite successful race sires with lots of offspring. Storm Cat is known for his successes on the track, and in the breeding shed for race production, but is also known for “bad” disposition, hot, difficult. The one Storm Cat colt I knew was true to this. But there are many others too, and all are different. Some people have had success in equine sport disciplines other than racing with Storm Cat close up… so that’s “pedigree” for ya, you neva no. The mare raced, won a bit, so was sound enough to do that, so that’s good. Cute baby!

Thanks! The breeder says the dam is very sweet and willing so she must have gotten enough of the other non-Storm Cat to offset his temperament.

Personally, I think the Storm Cat temperament gets overblown.

I had several by him in my care at various points, some of them were definitely screw-loose types, but I don’t feel like that temperament is prepotent as he moves farther back in the pedigree. I do think Storm Cat line horses tend to be hotter than some lines, but also not a hard rule. Temperament discussion aside, most people find Storm Cat lines to have a good jump.

I’ve always liked the look of Factum. He wasn’t much of a racehorse, but is from an incredible family.

Zamindar had some North American foals, but most were born in Europe. He had some really nice turf horses. His sire, Gone West- he has appeared up close in some upper level eventing pedigrees. [[There was an Olympic and WEG horse named Tanker’s Town out of a GW mare. ]] —> ETA whoops, not a GW mare, just had Gone West in the name by coincidence.

Rubiano is a horse that got some really nice sport horse types.

Really, it’s a pedigree chock full of nice TBs from a sport perspective.

what an interesting pedigree!!

Factum, the sire, is a 1/2 brother to wonder sire War Front (actually closer than 1/2 but I can never figure that out) from the very nice Starry Dreamer. Factum himself wasn’t nearly the same caliber of race horse or sire, but did manage to get 4th in the Group 2 Juddmonte Beresford S at two in Ireland. It’s a turf pedigree for sure.

Your Out of Line (as a grammar nazi, that was painful to type) comes from a fairly non-descript female family despite being bred to some very decent stallions. Her biggest claim to fame in my opinion is her sire, Zamindar, a full brother to champion Zafonic and the sire to champion fillies Darjina and Zarkava. You really do not see him in many US pedigrees. https://theownerbreeder.com/stories/zamindar-pensioned-at-19/

As someone who adores turf racing, I absolutely love most of this pedigree.

LOL! The “Your Out of Line” drives me crazy, too! Thanks for the input!

Agreed. I have 5 mares that have SC in them and only one that doesn’t. That one isn’t the hottest but she would be 2nd hottest and she has a great work ethic but she can be super super spicy at shows and when something sets her off. Out of all of them she would be my guess #2 for being SC and she doesn’t have him haha. The rest are all super laid back!