Wondering if you might have any TB stallion suggestions for an arabian mare (but also open to arabian or anglo-arab stallions). Plan on breeding within the next year. She is competing at 50mile endurance rides at the moment and doing very well, but I am originally from a hunters and lower level eventing background and am hoping to cross her with a TB stallion to get a horse that might be a bit more versatile in that area as well. I have included her pedigree here for what it’s worth, although I’m just starting down the road of pedigree research.

Mare strengths: Straight legs, strong even back, conformationally very correct. Has great feet and is very sound
Mare cons: 14’3. No withers (classic arab withers, but not too barrel chested). Scopey jump for size but hesitant over fences (can’t say for sure if it’s because she’s lacking experience or that’s her personality)

She has passed her initial vet checks for conformation and breeding suitability, and is very well put together- although she is only 14’3. My goal is not to compete at high levels (personal choice, I am too competitive to let myself go down that road). However, a nice versatile sport horse would be ideal. 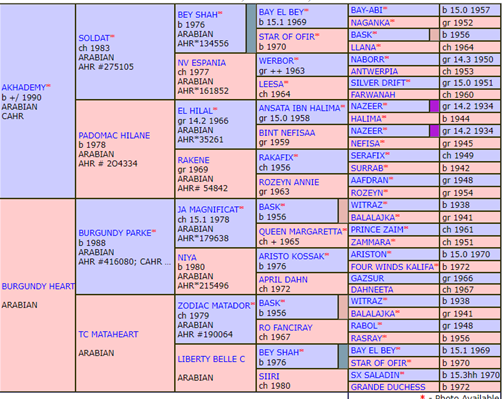 Located in Canada. Open to live cover or AI, have a good breeding vet ready to assist if needed

Hmm. Are you dead-set on a TB cross? I only ask because your mare has a lot of “hot” in her pedigree (in my opinion), and I’m not sure a TB would be the best cross to get you what you’re wanting. If your primary goal is getting something suitable for lower level eventing and/or hunters, I think I’d be more inclined to go with a warmblood stallion known for siring really good-minded, ammy-proof horses.

Also, do you have any conformation photos of her, especially her legs? With her being double Bey Shah, I’d want to find a stallion with VERY correct leg structure who is consistently passing that along.

Edited to add: Welcome to COTH! It’s always nice to have another Arab person join us here.

Not 100% dead set on the cross, no. I agree re: having a lot of hot in her pedigree, based on my preliminary arabian bloodline research (literally just starting a few weeks ago haha, so take with a grain of salt). I know Bey Shah is known for the hot temperament but this mare is actually quite level headed (I have a TB and a draft-TB cross and I’d say she’s on the same level as the draft cross). My experience is that she probably took a bit more work to get that level headed than if she had been a warmblood to begin with but it was actually more a training question than anything else.

Legs wise- I don’t have pictures off the top of my head but can get some. I understand the Bey Shah have club feet at times? Not sure if there’s anything else he tends to pass along. I’ve had her double vetted by two sports med vets specifically because of the double bred situation, and one of the farriers that works with the sports med vet also has examined her and has been doing her feet for the past few years. I consulted the farrier on her feet and conformation as well. All three were quite impressed with her and I made sure to tell them that ANY hesitancy on their part would mean I would not breed this mare.

One of the other options I had been considering was an Irish Draught cross stallion who is sturdy but not too big and very level headed, he is competing in eventers now, but I haven’t strayed from the TB crosses very far yet because the only thing the vet was concerned about was the size problem when breeding to a warmblood stallion - they had suggested that because she is smaller and this is a first foal, a warmblood baby might carry a higher chance of a fetus that is too big.

I welcome any/all thoughts and suggestions though, I know arabs generally do cross well and would be interested to hear what sort of stallion size recommendations they might have.

To be honest I’m also not into backyard breeding and if there are red flags that pop up along the way from the vets or professionals who are looking after her then I am actually just going to stop there. I started with conformational assessments as described but she hasn’t had a pre-reproductive ultrasound from the repro vet yet so we are just starting down this road.

All great temperaments, and good crosses for low level work. Saketini would be top on my list as a good complement to an arabian mare. Artrageous will round out the frame but seems to keep type while making a bit more “huntery”.

How old is she? A good repro exam is definitely where you should start, especially if she’s an older maiden mare. It sounds like you’re more than doing your due diligence. You’re already aware of the potential club foot issue, so you’re clearly doing some research.

Saketini is owned by our very own @EventerAJ and seems to be siring very good-minded offspring. That’s a great idea I hadn’t thought about for a TB sire.

The nice thing about Arabs is that they cross well with a variety of breeds and types (not that I’m biased at all!). The right ID could be an interesting option. Or what about an Irish Draught Sport Horse with a high % of TB blood? I’m not familiar enough with the breed to know what stallions are out there, but that idea just popped into my head.

Totally off base, Spring Hollow Statesman is a Morgan stallion from Statesman line known for producing some boss sport horses. While he is more of a working western horse, the lines are big time sport lines. Here’s an article: https://www.morganhorse.com/upload/photos/206SIGSIREStatesman2011.pdf

You could also consider a Trakehner stallion. If you present her at an ATA inspection and she is approved the resulting foal could be registered as a Trakehner. There are several Trak stallions with eventing credentials listed HERE.

(I’m presenting my Arab stallion to the ATA later this year, so I have Traks on my mind.)

I have two Anglo Arabian stallions and two TB stallions (who are both black and white overo). Nothing is better than an Anglo! www.allanglos.net