Conversations with My Yard Velociraptors

Last night was some wild weather: storm with 70mph wind gusts, rain so heavy that it looked more like ocean swells than rain, power out, the whole 9 yards. Woke up to roosters crowing through the open windows, hangry cats, & (inexplicably) a dazed bumble bee on the kitchen windowsill. Fed cats, let chickens out, then circled back to attempt to revive the bee with sugar water. Then it was back to the chicken yard to feed & straighten up. Dumped the collected rainwater out of a feed bowl. A mouse shot out from underneath. Before I could register this event, one of the hens swooped in & devoured said mouse. Decided this was my signal from the universe to go back inside & make coffee.

All was quiet for 15 minutes. Then heard tapping on the kitchen door. Opened it to find… 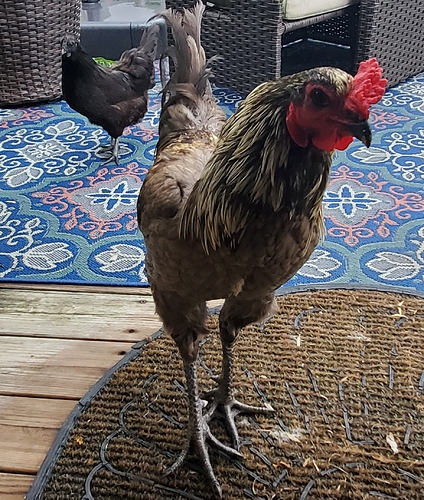 …Larry “Not the Cable Guy” Bird on the doormat. It’s hard to tell in the pic, but Larry & his brother Louis are basically the rooster from the Rex Goliath wine label. Fortunately, they’re as chill as they are gigantic. They also don’t act much like chickens. They answer to their names, wake up to sweep the perimeter if they hear a noise at night, & love sidling up to you for attention if you’re crouched down, their razor sharp beaks inches from your eyes. So, it’s a tad unnerving, but hardly surprising they would figure out how to knock on the door.

Larry: [Proceeding to try to walk around me thru the door] HI, mom! I’m checking for those pesky chickens you said were making a mess of the deck. Can I come in?

Me: Uh, I’m not sure how I feel about that, Larry.

Larry: Can I have a latte? Got up extra early cause of the weather!

Me: Yes. So I heard through the open window mere yards away. You and Louis. And Pugsley and Gomez. And all the baby cockrels, too.

Me: I really don’t think caffeine is good for you, Larry.

Larry: Okaaaaay. We’ll just eat the cat. Uh, I mean the cat food! The cat food you put out for the feral cat. Yeah. That’s what I meant! We wouldn’t eat a CAT! I mean, that’s ridiculous! [Laughs nervously]

Me: Larry, I’m shutting the door now. If you get off the deck, I will cook y’all the ground beef that thawed while the power was out. Leave that cat alone. And tell Lady Jane Grey I’m both awed & slightly creeped out by her mousing ability. But take her off the deck, too. Away from the cat. Ok?

Seriously, though. Anyone else’s animals acting oddly this morning? I swear it’s the storm plus the full moon coming!

I had no idea.

What a crazy time you’ve had.

I had no idea.

It’s usually adult, large breed hens that I’ve seen do it. I love chickens but they scare me a little! Lol

And lizards ! The years I had chickens at my barn was a lizard apocalypse.

larry is a handsome boy! He was probably just checking on you to make sure you were ok, you know, checkin in on the boss lady during his perimeter scan.

I know very little about chickens but he looks like a handsome guy to me. I wouldn’t want him as an enemy though.

know very little about chickens but he looks like a handsome guy to me. I wouldn’t want him as an enemy though.

Me either! They’re Liege Fighters, a breed developed for cock fighting in Belgium in the 19th century with the idea they were so big they could overwhelm everything else. They looove people & even get on with other roosters. They grounded & nearly killed a hawk this spring, though

Louis says it isn’t fair that Larry gets all the love, so another gratuitous chicken pic: 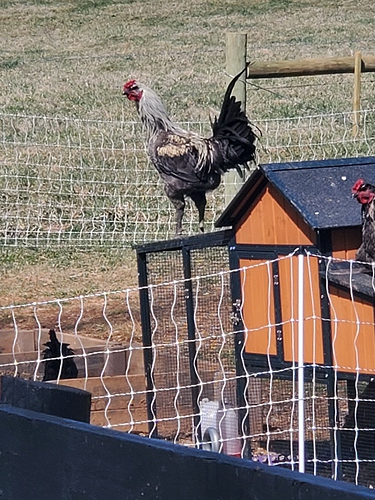 @BatCoach, they know who buys the high octane Don Roberto feed from Chewy

They have a regal sort of look, if one can say that about a rooster.

Yeahhhh…they’re handsome all right, but I admit I’m a little afraid of them. Chickens should be …well, smaller. And not eat mice.

Yeahhhh…they’re handsome all right, but I admit I’m a little afraid of them. Chickens should be …well, smaller. And not eat mice.

@TheDBYC some time, when it’s convenient, may we see a photo of the mouse eating bird?

@skydy, absolutely! This is the mouser: Lady Jane Grey, a Liege Fighter hen. 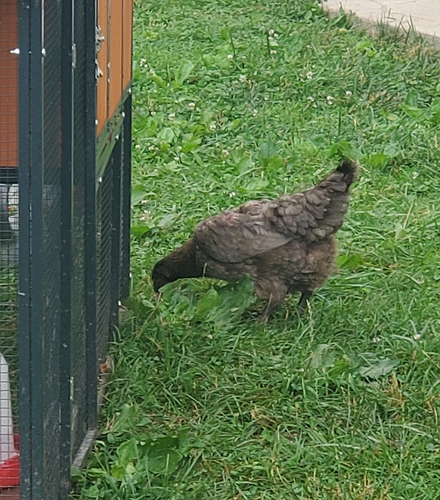 She certainly has a no nonsense visage.

That’s a good way of describing it! This was post-hunting excursion, so this is her "resting hen face’. She’s pestering Gomez, who is trying to mind his own business out of the frame.

I knew nothing about chickens at my last boarding barn. Still know next to nothing, but one rooster changed my inherent dislike of chickens. I think I didn’t like them because, as others noted, they can be scary.

Anyhoo, this one rooster by the name of Sparky (white with black flecks) was always running around outside of the chicken enclosure. I asked the barn owner why he was the only one out and wasn’t that dangerous because of bobcats, coyotes etc. She said the other roosters always attacked him in the pen so he was free to roam. (I don’t know why they would do that. Maybe because they were all red roosters and he wasn’t?).

I felt really bad for him that he didn’t have friends so started giving him little bits of my horse’s carrots. He loved them. He actually started to come to me when I called him. He ended up recognizing my car and coming over before I even had a chance to call him. I always had to be ready with the carrot bits as soon as I arrived.

I lost my horse last year so don’t see Sparky anymore, but he is one of the animals at the barn that I miss the most. Who would have thought I would miss a rooster.

OP - You have beautiful roosters and hens!!

Larry was thrilled that people enjoyed his antics yesterday! So he & Madison decided it would be fun to chill in the back of the SUV, which I left open after unloading the feed store purchases… 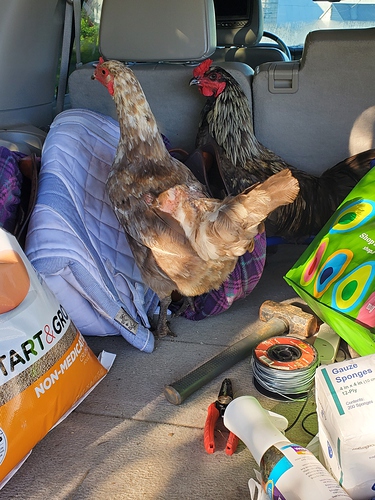 I lost my horse last year so don’t see Sparky anymore, but he is one of the animals at the barn that I miss the most. Who would have thought I would miss a rooster.

I am sure that he misses you! You should go for a visit!

I agree! They’re smarter & more personable than most people give them credit for.

I just wanted to thank you for this thread title. That is all.

The thread title made me laugh! When my girls are foraging and stalking bugs I call them my little dinosaurs. But when they’re running for treats? Then they remind me of elderly ladies running with purses

Only one of mine likes to be picked up. But they all make me smile.