Crazy question - can I pull a small arena drag with a compact SUV?

This sand is weird. It doesn’t get dusty. One of the very edges gets dry due to the sun/skylights, and you can kick around in it all you want. No dust. I’m sure as it breaks down it will have some, which I’m sure I’ll be on the hook for rectifying. I have a jug of dust control stuff waiting.

One of the boarders owns an excavation company, so I guess this is their primo stuff - ‘virgin sand’ from an excavation site. Its orange.
It is super uniform. It has absolutely no rocks. I think it was deposited from when the rivers were much higher than they are today. Personally, I hate it. It’s too fluffy. I want it to be firm under foot and this stuff isn’t.

I dragged our arena with my truck when we first moved in. Definitely not ideal but was better than nothing. The only thing I would mention is if your vehicle has any sort of “stability control” feature, turn it off. My truck did not like sliding any bit in the footing. But the stability control is an annoying/garbage feature on my truck anyway so may not apply to yours!

I would NOT go in 4lo unless you are staying under 5mph!! A friend borrowed my suv and we had a blizzard she put it in 4lo not knowing better and blew out my 4wd doing about 15 to 20mph down the highway. 3k later to fix it was never the same. Go with 4hi or awd and only if you need it! Just my overly paranoid due to my experience opinion, good luck n happy turkey day!

Interesting you say the sand is orange. In my area, coastal SC, orange colored sand is the least expensive sand, sometimes called builder’s sand or fill sand. It is coarse grained, and is often seen as fill in crawl spaces and under new homes. It is quite different from other commercial sands used for masonry and for arena surfaces. Arena sand here is white silica sand and where I am needs to be trucked in from over 100 miles away since it doesn’t exist nearby.

But color of sand depends on several factors so my orange sand may not be the same as your orange sand. It might be worth your time to try to find a person experienced with the types of sand used in your location to advise you about it.

Here are some pictures of it. 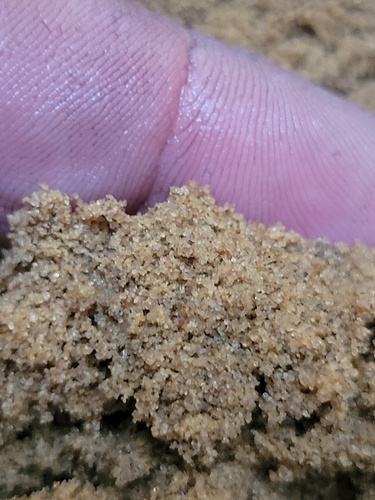 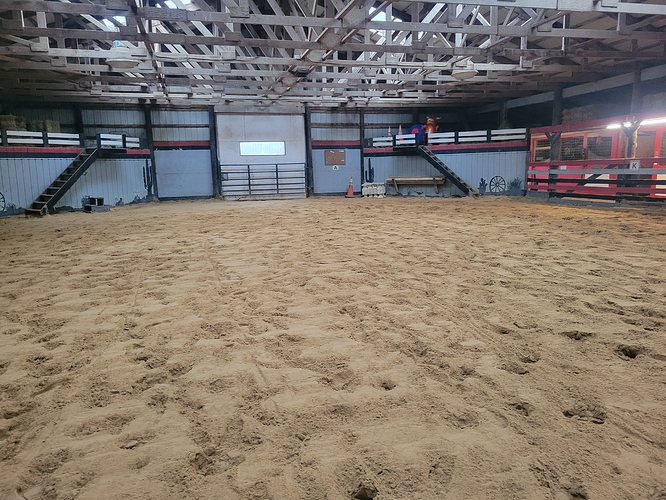 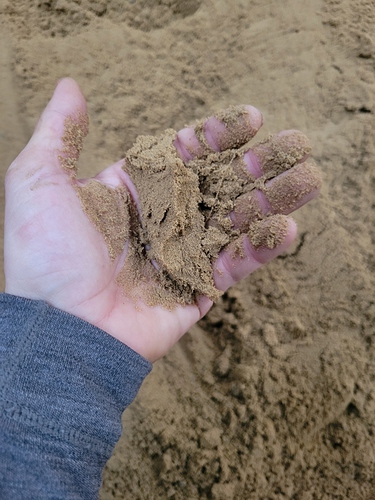 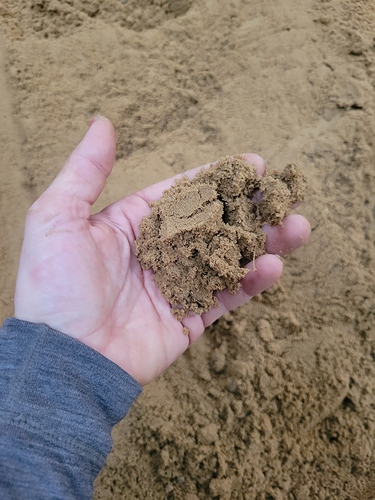 I am not anywhere close to educated about the types of sand, What you are holding looks pretty coarse, compared by picture to what I see in arenas around my area.

Builder’s sand (I am not saying that is what you are holding) is uniform and the grains are round or rounded. On a large scale think of it as like round marbles all poured out together in a confined space. The marbles pack down well top to bottom, but because of the round shape the sand doesn’t handle lateral forces well,

The best rena type sand has angular grains. When packed down and watered it handles both compression and lateral forces.

Over time and use the sand breaks down and the ideal angular grains become more rounded. Arena builders around me suggest a lifespan of arena sand to be around five years before it has to either be topped with new sand, or even scraped off, f hauled away, and replaced. I am seeing that with my own arena which was installed about 4 years ago. I am on the list for sand replacement this winter sometime between the bigger arena jobs when the heavy equipment is nearby. .

Agreed with the description of round, and the desire for angular. I spoke with the BO about this before we got this stuff. But he typically doesn’t listen…

I went to the deepest spot and just SOAKED it. As wet as I could get it. It STILL won’t bind under foot. I hate this stuff.

All the water, dragging, and rolling in the world won’t transform the wrong material into decent arena footing. Is the barn owner a rider?

Yes and no. I’d say he’s a rider when he has time, but not a true horseman ever. He is frugal to a fault.

Sometimes that is not enough water to keep the dust down and the footing nice, and I am the only one riding on it. Sand arenas require lots of water, applied frequently.

That’s crazy. My indoor (sand) doesn’t even get watered once a week. Twice a day for one rider?

I would try a steel drum roller to pack this stuff down. Doesn’t sound like dragging it will help your cause.

The suv would be ok if the dragging implement is wider than it. The suv May also pack the sand down which sounds like a positive in this situation

Your arena is indoors. My sand arena is outdoors in the sun and the wind in the Deep South. I have lived here over 60 years and have never seen an indoor arena except in videos. Covered for sun and rain protection, yes, but never with walls over 4 feet high.

Agreed with the description of round, and the desire for angular. I spoke with the BO about this before we got this stuff. But he typically doesn’t listen…

Where in the country are you? What you’d want to do is remove some of your river sand and add some manufactured sand, ie sand made by crushing rock down to size rather than sand that was mined.

is limestone extra dusty? I don’t know about arenas, just know about the gravel roads around here.

is limestone extra dusty? I don’t know about arenas, just know about the gravel roads around here.

It will be dustier than the river/virgin sand, but you need some of that angular sand in there to give you some grip.

I was trying to maintain footing in an outdoor last winter that was (supposedly) river sand. All the fines had washed away, and what was left was too large and too round (except for the actual rocks or chunks of gravel, but I digress). It needed to be WET, like, it rained so hard it was a total lake and loose yesterday, today it’s perfect. I actually sent the sand off to a footing company to be analyzed (ring was not built by current BO), and they said it’s all off the charts on the large side, you can’t add anything to it to firm it up except to replace most of it with different sand first.

So, based on these pictures, it might feel loose to you because it’s the wrong kind of sand for an arena.

And all that said, I either dragged with the tractor or we pulled a chain drag with a Gator. If the footing was actually wet enough to be useful, an ATV would overheat (but it also had other problems to be fair). We tried at one point to pull the heavier pasture drag chain (flat side down) with a pickup to see if the weight would help with compaction, and the pickup struggled without 4wd. I never had to put the Gator or the tractor in 4wd.

I think a Jeep would be a reasonable try. You’ll want to go slower so not to dig in the corners too much with your tires. If the looseness of the footing gives you trouble, use 4wd high, but be mindful this will also cause your tires to cut in more, and it may be counterproductive. If the sand is on the drier side, you should have less resistance and weight to drag against than when it’s wet, so your vehicle won’t work so hard.

But I don’t think that this kind of drag is going to be the way to go. The chain drags do tend to promote the larger particles sitting on top. Ideally, you’ll want a real arena drag with a roller on it, which probably means pulled with a tractor because of the type of hitch used.

As luck would have it, I am now the owner of an ABI Arena Rascal, 6.5’ wide. Taking delivery at the end of January. I’ll let you guys know how it goes.

As luck would have it, I am now the owner of an ABI Arena Rascal, 6.5’ wide. Taking delivery at the end of January. I’ll let you guys know how it goes.

We have a TR3 and is absolutely wonderful.
BUT, it took months to get it adjusted just right.
Don’t despair if you have to keep tweaking it time and again until it fits your arena dragging perfectly.