Dead Squirrel in Water Trough - Anyone Ever Seen That Before?

I was shocked to see a dead squirrel in the water trough this morning. Never seen that in 20 years. The water hasn’t been frigid either. I thought maybe the poor squirrel was pregnant? There were visable nipples on the belly. But that might be normal. So awful to see on easter morning.

If they fall in they can’t get out unless there’s something in there to use to climb out. I’ve seen it a time or two and have left poles in the troughs just in case.

Maybe it was sick and could not get out?

We use these approved Fish and Wildlife bird ladders in all our tanks, keep all critters from drowning, from mice to porcupines: 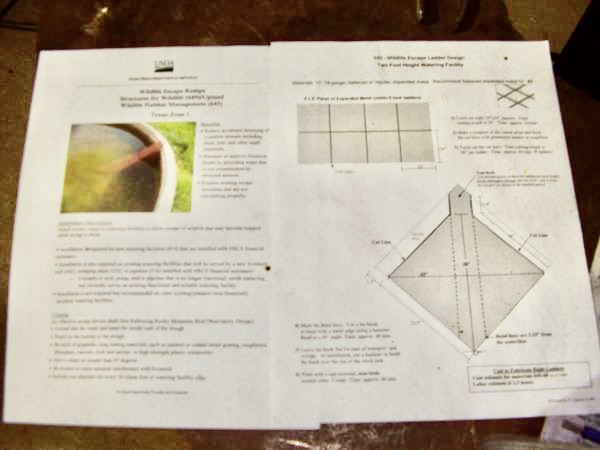 Yup they fall in and swim around until they drown. After finding the first one I dropped a length of chain from the fence into the trough so the poor things could climb out. Never happened again.

Many years ago I was horse sitting for a friend that had this happen in her horse trough. She said that most of the ones she found were male. She also just fished them out and never dumped the water and put clean water in. ICK!!! Can you say Holy Botulism! Anyway I would use some sort of float or even better a ladder. I have not had this problem. Gremlin ate all my squirrels years ago and they avoid my property now.

Unfortunately, I’ve seen this a few times. Always makes me sad. I have been lucky in being able to rescue a few before they drowned, though.

I found one, obviously exhausted, paddling away. The water level was about a foot below the edge of the trough, so he couldn’t reach it. I didn’t have anything to scoop him out with and was afraid that if I left to get a rake, shovel or piece of rope, he would be gone before I got to him.

I cupped my hands under his butt and lifted him to the edge of the trough. He grasped the edge of the trough with his front feet and didn’t budge. Just sat there with his butt in my hands looking all around. I think he was either shocked he was still alive or too exhausted to immediately run. I finally raised his butt further to encourage him, and he pushed off my hands and launched himself about five feet through the air, hit the ground and disappeared.

One note of caution to anyone trying this method. A few weeks later, I found another squirrel. Getting a little cocky about my previous success, I went to scoop him out with my hands. The little bugger whipped his head around to bite me. He was apparently not as far gone as the other one had been.

Luckily, I tossed him out and got my hand out of the way. I had a red mark on my hand but no broken skin. The first thing I asked the BO when I got back down to the barn was if she had heard of any rabies in the local area.

We have it happen, with increasing frequency if we have a dry summer. We tie an old leadshank to a fence rail near the tank and drop the other end in. They climb out with little trouble, but we only use 100 gal tanks in the summer because we dump them every day.

We have foxes that will come drink at the tanks during the dry weeks and probably deer, but they come at night so we don’t see them.

We keep a rope or length of chain in the tank so they can climb out. Helps lizards and such, too

Also found a baby owl standing a trough that had a little water in, got it out carefully put it where it was protected once dry it flew off

The local group of crows if needing water will set waiting for me to put water out for them These crows are like the horses, they see me then will fly in looking for their water

After finding the first dead squirrel, I put shallow water bowls just outside the pasture fence, backing up to the trough. It helped a lot but didn’t totally stop the problem. BO wasn’t enthused about sticking the end of a rope in trough.

I’ve built a ‘ladder’ that is permanently attached to the lip of the trough (old iron bathtub) and angles all the way to the bottom. The horses can’t reach it because of the way most of the tub is on the other side of the fence. It is made of notched and rough sawn wood so anything can climb out (or in). Maybe not the earthworms (how DO they get in??)…but anything else. Because, honestly, even a mouse breaks my heart. And everything except a fish will eventually drown, even frogs. I have mouse traps set not far away in the barn, but I won’t drown them. Maybe because while I can swim, I’m not great at? To me it is a very horrid way to die.

I always leave a ladder so critters can climb out of the trough. Just about anything that would give “purchase” with claw/paws would work-- some rope, a piece of plastic snow fencing or chicken wire. I use just a 2ft piece of a wire closet shelf I had laying around and attach it to the hydrant pole with baling twine and a carabiner clip.

I had FIVE last fall drown in our water trough! So put a log in it but now I’m going to put a lead rope in it. Thanks COTH! Also put a rubber tub next to it with water for the smaller animals.

Yup… when we used the big Rubbermaid tubs, guaranteed to lose at least 1 squirrel and 1 crow a season. I tried the floating lead rope and a stick, but found that the birds still drowned, so I used an old hay net instead. That gave sufficient “purchase” to whatever critter happened to fall in, so no more Critter-cide.

Now I have a Bar-Bar-A Horsedrinker, so no more worries about critter drownings.

Thank you @ytr45 for starting this thread. In 10 years I’ve never had anything show up in my troughs but even so, will now take these recommendations to try to ensure it stays that way.

I tried the floating lead rope and a stick, but found that the birds still drowned, so I used an old hay net instead.

I was wondering how lead ropes and sticks could work. I have always used a piece of chicken wire folded over a few times to make it stronger and better able to keep it’s shape.

Never a squirrel, but I once had a young raven get stuck in the trough. Luckily it was buoyant so it just floated around until I found it and saved it. Kept it in a stall overnight and the next morning it flew away.

Rats/squirrels will drown themselves if poisoned though. No matter what you put in for them to get out.

Very timely thread, thank you! Found a dead squirrel in my mare’s water trough this morning. I have a surplus of lead ropes, so I’ll try that, or a board or chain if that doesn’t work.

I had a lizard in my pony’s trough last week. Wild West out here.

I have had a squirrel, and then one year, a couple of pigeons. I bought 8 feet of rope, doubled it, knotted it as a ladder, and then looped it around the fence rail over the trough and into the trough so that they can climb out. I haven’t had a dead animal since. We are in drought so they will want to drink from the troughs. After an animal dies, I dumped the tank and bleached it.