My new OTTB has been doing brilliantly. She does have episodes of hind end stiffness that come and go, nothing extreme but odd. Today the chiropractor saw her and she seems so much better after even this first adjustment. Her SI joint was completely out. He also mentioned that she has a dent in her hamstring/the muscle traveling down the back of her left haunch. I’ve never noticed it before, but it’s there in her pre-sale pics too. This is the same side that had the SI joint issue.

He told me that he wasn’t too concerned about it, especially since she was overstepping at the walk right after the adjustment. I know that muscle dents or lumps can happen. Anyone have a horse like this and how do you keep them comfortable?

She’s going to be on the chiro doc’s list every 6 weeks now, and I am looking into massage and potentially acupuncture to continue to help her along as we progress in re-training.

On the left butt point: 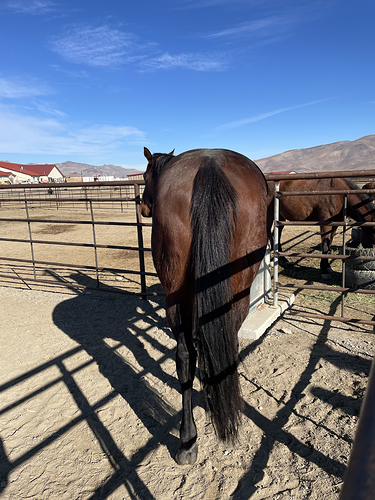 I had a horse with a “dent” in a different hind end muscle. It was about the size of yours. The horse evented intermediate/2** with no issues, and none of his (skilled) vets or bodyworkers ever expressed concern beyond noting it, so I wouldn’t worry too much.

Oh no, you got a dented defective product. You should immediately return that one

Sorry, I couldn’t help myself.

Haha. I had to be a little silly with the title.

Her intermittent stiffness has been a little concerning, but honestly I’m just feeling relieved that the chiro helped her as much as it did and that the little dent was brought to my attention. It’s probably cosmetic at this point but anything that helps me understand her better is good in my mind.

My TB has a similar dent on his RH butt cheek in almost the same place. It’s relatively new, and has coincided with some “funniness” on his RH…which also happens to be the leg that gets cellulitis periodically and has recently entered a stage where he gets “faux cellulitis” (every 6 weeks, give or take, his whole leg swells up like it always has with cellulitis, but he’s not lame on it beyond it being a little harder to bend because of the swelling, and it goes away with just uniprim).

With all of that being said, I’ve owned him since he came off the track in 2006. He’s been a total and complete warhorse for me and has shown through the 1.40m-1.50m/FEI GP level for 15 years now (12 straight years at that level!). One of my body workers suspects a muscle tear from compensating for a slightly odd way of going…possibly from some arthritis (which would make total sense given that he’s been showing heavily with me for 16 of his 22 years), possibly from the cellulitis, and possibly from the fact that he’s always been a complete idiot in turnout (where he lives 24/7). I’ll have to see if I can get a picture and add it here.

None of my vets have had any particular thoughts on it. And though he has days where he starts a little stiff, he is still sound and still jumps pretty regularly…and still up to 1.40m.

Thank you, that’s really interesting. I’d love to see a photo. Also, your horse sounds totally badass.
This mare is only 4. She didn’t spend a whole lot of time at the track…no heart to race, but potentially in her training days as they were trying to push her to gallop faster she may’ve torn something.

The only other peculiarity that may or may not correspond to this dent is that she tends to rest that same foot quite a bit in relation to the other hind.

Depending on how much weight she is carrying, my mare has dents show up around her girth. Massaging them always gets a big reaction. They are pretty big as I can put my fingertips in them. I assume they are from some heavy spur use at some point in her life before us.

After being kicked by a horse, one of my calves has a noticeable permanent dent. There was swelling and bruising, but no scar on the skin. I think the muscle got partially cut.

Her SI joint was completely out. He also mentioned that she has a dent in her hamstring/the muscle traveling down the back of her left haunch.

Well…the hamstring is not just one muscle but a group of muscles. And the SI joint might be “stuck” but it isn’t “out” - as in out of joint.

If the horse has a lack of mobility on one side, it is not unlikely that would result in a muscle imbalance and what you’re seeing might be the junction between two muscles, but perhaps one is stronger and larger due to some kind of lack of balance. It could be caused by the stuck SI joint, or the SI joint might be stuck because of the muscle imbalance.

I am not a vet or an expert and can’t find a really good image - but maybe look here. http://www.healthequinetherapies.ca/resources/HET%20Muscle%20Information%20-%20Hamstring.pdf
The “dent” might be where the gluteus and bicep femoris come together? It’s hard to say from the images but a good massage therapist might be able to confirm.

I have a new human PT who is helping me proactively avoid injury for endurance sports. He is pretty fascinating and can identify each and every separate muscle in my leg and move them around and explain why one might be tighter than another. I had a small inflammation this week in an adductor muscle and he said that “most people would come in and say they hurt their hamstring,” but it was a specific adductor (there are 5 and I never realized). He believes that overall lack of mobility is the primary cause for a lot of injuries, not that injuries cause the lack of mobility. So I’m working to become more flexible and balance out some of my imbalances (things that get even worse by repetitive sports like running & cycling, for example.)

I think the chiro and massage are good starts but would also consider what exercise you are doing and making sure to balance it carefully - and/or actually do more on the “off” side than the strong side, so as to not make the imbalance greater. E.g. any time you are doing lateral work make sure you’re not doing more in the direction that is easier for him, but actually doing the opposite - more in the stiffer direction.

I would definitely ask if there are stretches or exercises that you can do and/or things to avoid. E.g. maybe doing more lateral work and less trot work would help.

Both hind end stiffness and muscle “divots” (usually in hind end or shoulder) can be signs of PSSM.

Equine Polysaccharide Storage Myopathy (PSSM, EPSSM) is a progressive disease of the skeletal muscles with very painful symptoms in acute cases. Type 1 PSSM and Type 2 PSSM PSSM was first thought to be a problem specific to...

" As the disease progresses, there is severe muscle atrophy in the hindquarters, shoulders and topline; some horses show localised muscle loss, resulting in “divots” in the musculature which are sometimes mistaken for injuries from kicking."

However, if it’s been there since you bought her it’s totally possible that it’s just an old kick mark thats not going to affect her.

@S1969 thank you, that is really interesting! We do make sure to balance her less favored side in work. I had no idea about the hamstring muscle group and will ask the massage therapist about that entire area for sure.

@greywithchrome I’ve been considering pulling blood/hair for a PSSM test (or the “type 2” variant(s) due to her breed) even before the dent was noticed. Just in case. I’m hoping the stiffness is a result of a big gangly horse still growing and never being taught how to use her body correctly with a rider, but it’s best to know for sure.

I had a mare, which I’d bought as a two year old, who came with one that never affected her in any apparent way. Veterinarian said that it was probably from a kick, when she was a youngster, which had separated the muscle.

It was strictly cosmetic, and I pointed it out when selling the mare several years later – the buyer hadn’t even noticed it. She passed an exhaustive PPE with flying colors.

My new mare has a small dent in her neck, but it doesn’t seem to bother her at all. She’s slightly stiffer to that side, but no more than I’d expect in the off side of a horse that’s been out of regular training for a while. I’ll definitely keep it in mind when we get back to work in the spring, but I’m not worried right now.

The thing with muscle dents is that, unless the horse is hugely and specifically reactive to that spot, it’s hard to tell what’s really going on.

My new mare has a small dent in her neck, but it doesn’t seem to bother her at all.

I have one of those as well and I suspect it might be a vaccine or injection/IV injury. It’s right in the general area that vaccines are given, but could have also been something other than a vaccine. I didn’t get her until she was 11 so no idea if I’m right or not.

Oh! Interesting idea! My mare’s is in the very same spot.

The trainer I bought her from had no idea where it came from, but that makes a huge amount of sense.

Would that be caused by poor injection technique, or something else?