DNA Results In! Anyone Want to Take a Guess?

I posted earlier about the pending DNA test for my little mix breed pup. He is closing in on 14 weeks old, right about 15lbs. I have a photo of his mom (who is about 30lbs; guessed to be a beagle/dachshund mix) but no knowledge of who dad is. I am attaching pics of her and my little guy, both a couple weeks ago and as of this morning. Any guesses on the results before I post them? I used Wisdom Panel, in case that matters. 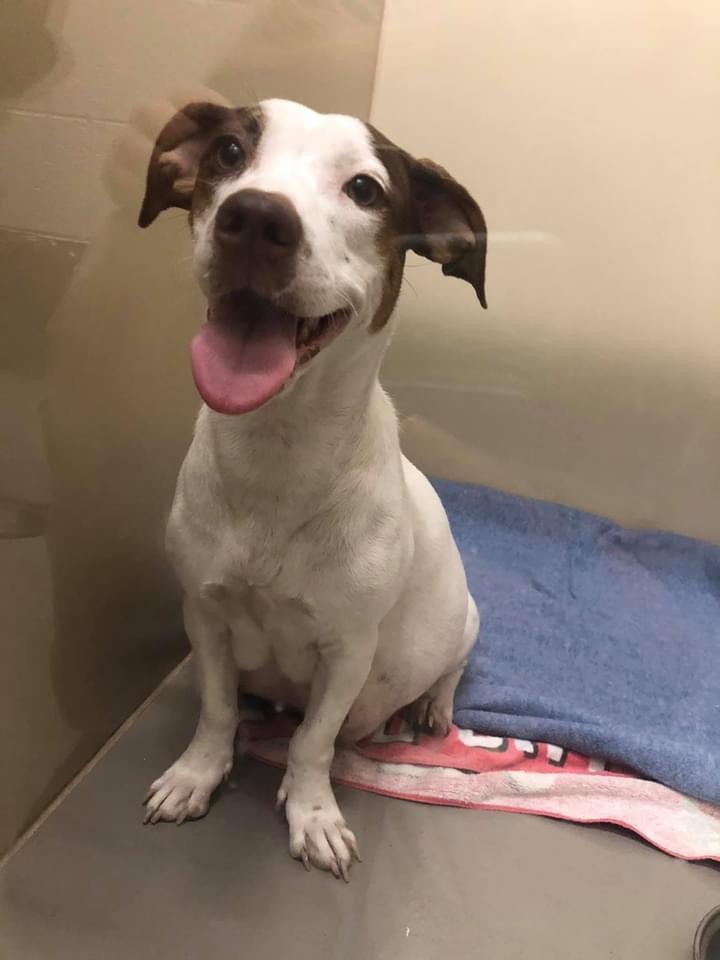 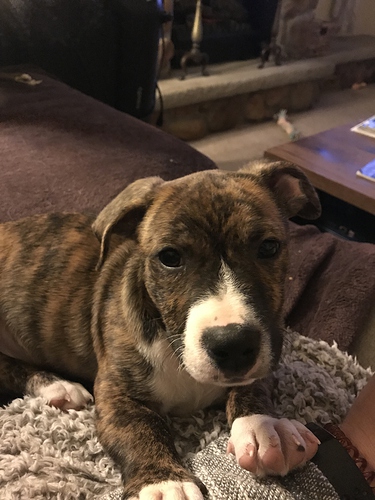 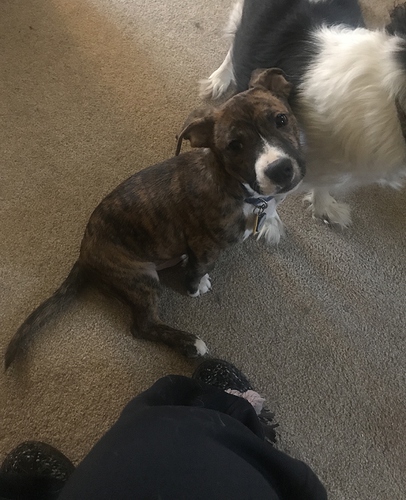 Guessing your little guy has a majority of pit bull, mama looks like a mix or 4-5 types.
Just know that Wisdom is sometimes way off on their tests. I’ve seen some results that can’t possibly be true.
Cute little guy you have there though.

Well geez, that’s a letdown. I didn’t realize they were faulty.

On my Dog Forum, they only recommend Embark for dna tests as they have a more accurate testing system and are affiliated with Cornell University. People use Wisdom and the other one
because, I guess, they’re cheaper but I’ve read that many owners have gone ahead after getting poor Wisdom results, and used Embark. There seems to be a big difference in the quality of the test of the different companies according to what I’ve read from dog enthusiasts.

I agree, embark is most likely to be accurate and is well worth the extra cost- I’ve done two now.
I’d eye ball him as terrier mix, pittie on the larger end or russel on the smaller side. Doxie I can believe of momma but less hound, unless she bays?

I see pit bull in the brindle pup. I have zero trust in even the people tests after my mom had one done last year. It was a gift from someone and we know her heritage. It was really funny what they said was her ancestry…

What did your tests say @Big_Tag ?

Well, your guesses are generally pretty spot on

Not a lick of hound. There are a few eyebrow raises in there (Pumi??) but I would think it’s pretty accurate. He is the sweetest little guy. And I do mean little. He is no taller than my Chihuahua but weighs about 15lbs. So he’s pretty wide. But he loves everyone had I have never had a puppy who was less mouthy. He never play bites people (never even attempted it) and while he does like to roughhouse with the other two dogs (and cats), the Chi put him in his place super early so he knows what he can and can’t do with her! He’s very close to housebroken and super smart, but less energetic than you might expect with that makeup.

He also tested negative for all the health conditions they screen for. I got the Embark test that includes the health tests as well so will be interested to see how they turn out. The one thing I am pretty sure they are not right on is the size projection. On the high side, they said 37ish pounds. He’s pretty chunky and at 14weeks and 15lbs, I think he will exceed that.

I used Wisdom Panel. It was spot on. Based on what her surrender papers said, what she looks like, and how she behaves. I think generally Embark finds more smaller percentage dogs, but for a basic ‘what is this’ Wisdom Panel was just fine.

oh I’m glad you went for the Embark test and the Embark health test is SOOOO worth the money.
Embark guessed my rescue GSD weight within a pound or so. And I was thrilled that she doesn’t carry the DM gene as I lost my last dog with DM.

His temperament sounds superb. He sounds like a fun little guy. If he’s that smart, maybe you can enroll him in an obedience class or Canine Good Citizen class. He’d probably love it.

He has been to puppy preschool (which was really just puppy playtime) and was excellent. He was supposed to continue with puppy obedience but we are back on lockdown in my neck of the woods

I’m no master trainer but I have been working with him at home and he knows sit, down, shake, spin (though his “spin” is more like a slow circle

) He is so smart but we DO have to work on one thing…he loves playing keep away/tag, not unlike a horse that doesn’t want to be caught of out a field. It’s very much a game but I’d like him to get a little more obedient to being summoned

My young rescue also picked up that ‘keep away’ game until we graduated to real ‘recall’ training but she still loves for me to play like I’m gonna get her. That’s just puppy play behavior.
BTW, what’s his name?

Freddy! His rescue name was Flint, so he’s Freddy Flintstone

Bumping this thread up - Freddy’s Embark tests came in!
I have to be honest - Wisdom’s seem…more correct. A fair amount is the same (he’s very clearly 1/2 Pit Bull and/or AmStaff, and then another ~15%ish American Bulldog). Embark pegs the rest of him as mostly Pomeranian and American Eskimo, then “Supermutt;” which they say is boxer, fox terrier, and Lakeland terrier.
Wisdom pegged some JRT in him, and I was surprised Embark did not. He is a little short haired guy so Pom and American Eskimo seem like a stretch.
Embark also put him at 30lbs full grown (Wisdom said ~38lbs). He is 18lbs at ~4.5mths. I thought for sure he would be bigger but geez, both peg him as a small fry.
I did the health check for him on both tests and he’s basically a beacon of health

He carries 1 marker of 3 things that will not affect him but could affect relatives.

I thought I would post the update. It’s so much fun to see what these tests come back with!

He is a little short haired guy so Pom and American Eskimo seem like a stretch.

Short hair is dominant to long hair. If he is going to stay small, that could be some Pom influence. Super cute, whatever he is!

I didn’t realize that about short versus long hair. Thank you for the info!
It’s so weird how the two tests vary so much. It’s like the “leading breeds” are the same but below 10-12% it’s crazy different.
As he’s gotten a little older, he basically looks like a Pit or Staffy on legs that are about half as long as they should be, and a back about 50% longer than it should be. But he’s so cute and such a little sweetheart. I don’t care what he is, really! 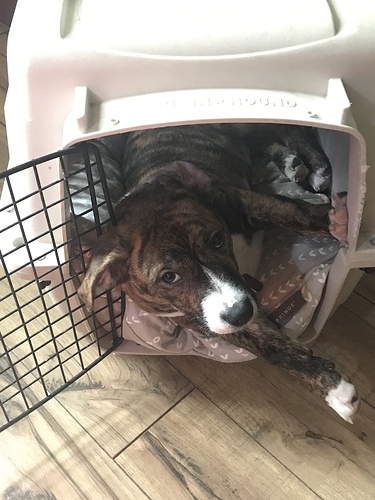 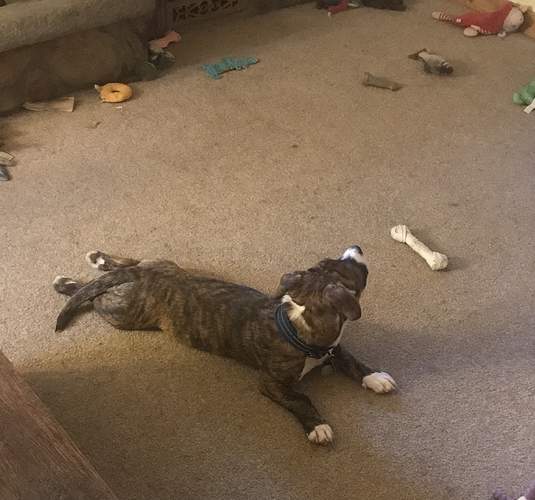 Your pup is absolutely adorable!

Do keep in mind that NO genetic tests exist that can tell you what breed(s) a dog is made up from. The technology isn’t there. Do it for the entertainment value, but do realize they are in no way accurate, no matter which lab you use.