Do you like to use the quote, unquote – Rolkur Method?

“Yeah when it is necessary, but there is some kind of negative thing about rolkur, but I don’t think it is negative, when it is done properly, then it is good. But when you ride in the old classical school way and you don’t do it well, then that’s not good for the horse either. You really need to get into it before you can judge it, and I think people see something and say ‘oh that’s bad for the horses’ but I don’t think that’s right. I think everything is bad for the horse when its not trained properly.”

Oh my, I don’t think there is a positive side to rollkur rather than using it in a last ditch effort not to have your horse clear out on you.

If you are asking me, no I don’t use it. I was taught to have the poll the highest, except in long and low and that is never behind the bit. 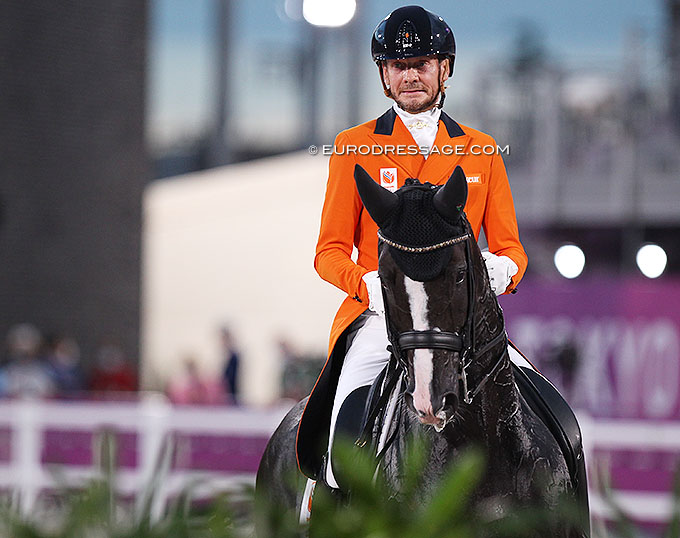 Edward Gal Takes a Sabbatical. No Competitions in 2022

Long-time Dutch number one Grand Prix rider Edward Gal has announced that he will taking a break from competition. The year 2022 will be a sabbatical.

There is never any way to do RK right. If you’re doing things right, it’s not RK. If you’re in RK, it’s not right. It really is that black and white.

Now, that does NOT mean there won’t be moments in time where that horse has put himself into a RK position, or perhaps you have put him there for some safety reason. That isn’t training. Allowing a horse to stay there is bad. Always having to put him there for “safety”, is bad. Period.

But when you ride in the old classical school way and you don’t do it well, then that’s not good for the horse either.

Regardless of how you feel about rolkur, he’s not wrong in ^ that statement.

The question is where does classical end and modern begin? The ramener outré of Baucher may now be considered classical, but it is the foundation (possibly the wrong word, maybe beginnings is better) of Roll Kür. Ramener outré was meant to be something the horse could give in relaxation & was not meant to be held for minutes on end. So at what point does RO become RK?

I keep wondering why there is quote, unquote in the title. Can’t one just use " Rolkur Method"?

(Not that I get why it needs quotes at all.)

It sounds like the interview might have been much older than that though? It’s a bit unclear, but before the Q&As start it says, “Back in 2010 at the KWPN Stallion show, when I sat down with Edward to talk about the horse that started it all, the Trakehner stallion, Gribaldi…” and then later before the questions about rollkur in the warm-up it says, “Waiting for the final score at the 2010 WEG in Kentucky – they were victorious, but the pair were seen having problems with the changes in the warm-up arena during the competition…” Also his answers about riding Totilas are in the present tense.

So FWIW I think the content is mostly old, with the bits about the Totilas sons added to the beginning and end more recently.

I keep wondering why there is quote, unquote in the title. Can’t one just use " Rolkur Method"?

(Not that I get why it needs quotes at all.)

OP is quoting from the article, in which the author reports asking EG, “Do you like to use the quote, unquote – Rolkur Method?”

Oh. Thank you for clarifying that @Libby2563.

Every time I read the thread title I think of a coworker who can not complete a whole sentence without using air quotes at least once.

Oh. Thank you for clarifying that @Libby2563.

Every time I read the thread title I think of a coworker who can not complete a whole sentence without using air quotes at least once.

LOL that sounds like an SNL skit or something.

best SNL skit ever!!! and cured me of ever using airquotes btw

I’d love to see Gal do a freestyle to Sergeant Pepper’s Lonely Hearts Club Band, in that outfit.

I’m living in a van down by the river!

It’s barbaric. Only to be used infrequently as a correction and even then, best to avoid.

I don’t anyone who advocates for rollkur, period. But I do get tired of all the keyboard warriors who jump on a picture of a horse overflexed for a single second, screaming ROLLKUR.

Dressage is a sport that requires its athletes to be supple. Achieving suppleness means stretching the muscles, the same way dancers and gymnasts do. If they are forced into a certain position and held there, trained there, that is abusive and wrong. But many photos I see held up as examples of abuse are a brief over flexion / overstretch, or more often a horse having a moment of resistance and bearing down / curling in. These photos are almost always a single frame taken from a video, and when the video is viewed it’s clear there is no rollkur happening.

There are many riders who actively use rollkur and have tried renaming it to try and get past the rules.

It’s been found bad for horses - the position of rollkur. Physically, mentally and emotionally abusive.