Does gelding early actually give more height or is this an old wives tale?

Also what is classified as ‘early’

Look at the chart of average growth plate closings in horse skeletons.

The theory is that, if you geld before turning two, at the time most colts would go into puberty, that pushed those growth plates on the end of the bones to close, they will take about six more months to do so, growing that bit longer.

That may give those gelded before two maybe 1/2" taller withers than one still a stallion at that time and going thru the standard closing at puberty: 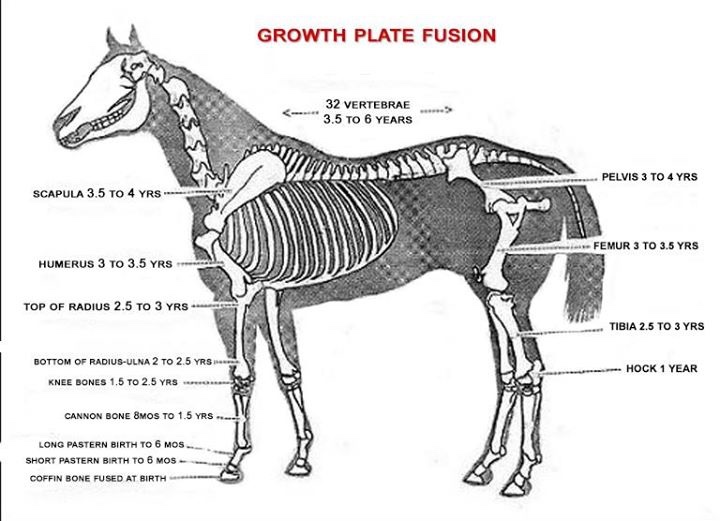 Gelding early, before yearling age, does seem to let the young male horse finish taller. Studies years ago by a Texas college, concluded that gelded colts got taller than ungelded colts at their final measurements. Colts were siblings, full brothers, half brothers, measured over several years of the project until they were mature horses.

The conclusions reached were that the stallions had more testosterone, which closed their knees at younger ages of around one calendar year. Height was reduced because testosterone built stallion muscle instead of going to height. Geldings without testosterone, did not close their knees until much older, allowing them to get taller, way past the yearling ages.

We changed to gelding our colt foals when they are close to or past their full yearling birthday. The two we started with, gelded at 7 months, just grew too big for our uses, had to be sold on. A real heartbreaker, they were SO NICE. Going to the yearling age for gelding has kept the colts at reasonable heights, did not need to sell them. We only breed for our own use, so having those 2 colts “fail” because we gelded early, made us kick ourselves for quite a while.

We are able to turn the young colts out after weaning with the older geldings, so they develop good social skills in the herd. They have playmates that will play hard and squelch obnoxious colt behaviour. The young horses are definately kept as the “low men” in the herd status levels! Our young stallions do not take much interest in the mares before their yearling age, not very “stallionish” in behaviour, so they are not difficult to deal with in daily handling.

Yes, there is legitimate backing for this theory. It will always remain a “theory”, as full siblings may not mature at the same height with the same gelding date, early or late. But with racehorses, this is one of the reasons why colts are often left colts (at least unless they beg to be gelded), to “hasten” closure and maturity. Years ago, I knew one race trainer who never gelded any colts at the track, then had them all injected with hormones as well. Yikes, it was scary. But that’s why.
Show horse people often do the opposite… geld early, as often they want the final size of the horse to be as large as possible, the current trend, and are usually not in a hurry to stress the horse’s skeleton. Those breeding ponies near the size limits keep this in mind too.
Are there any “guarantees” that it will “work”? No, of course not. Welcome to horse breeding… it’s a crap shoot.

I had a quick look at clones and the different heights

Both Gem twists clones are only 15.2 and although I couldn’t find the exact height of Gem twist I definitely imagine he was taller than this

So definitely backs up this theory