He is a 9 year old Connemara cross. Mostly a dressage pony, but we have popped over a few low jumps. He has a weaker right hind leg and stifles that need a lot of conditioning.

I work in accounting so my time and daylight between January-April are limited. I’d like to keep him working all winter this year but am not a fan of just popping him on the lunge line. I am hoping 2 shorter, harder working, focused lunge sessions during the week, plus one or two rides on the weekend keep him in better shape. My trainer rides him one day a week as well.

I recently borrowed one to try for my OTTB. He is lanky, big and young and he had been tripping behind since mid summer and just hasn’t felt right on his RH (not lame but weak if that makes sense). I had two vets rule out neuro and any lameness, and determine it was mostly hind end and stifle weakness. We blistered and my SMS vet suggested trying one among other things as part of his PT/booty boot camp. Currently he does 2 days hacking, 2 days dressage with raised cavaletti, one lesson and one day lunging in a Pessoa.

I just started using it this week, so right now I lunge in it 5 mins or so and then take it off on my non lesson/Pessoa days, I plan to built up to riding 5-10 minutes next week and add slowly until he is strong enough to use it the whole ride, then taper down to using it twice a week either on my hacks (my hills arent that big) or my dressage rides. I have noticed even fitted at rhe suggest 75% starting length, he has to engage more in the lunge and it makes him work harder but this is also a horse that is lazy and naturally likes or drag himself along rather than engage.

Great, please keep us posted on his progress

Hi. I just got my system and am a bit hesitant about the fitting of the bands. Is 50% elasticity the same as 50% length?

Thanks, I want to get this right before I trim the bands.

I hated the way they wrote that manual. So confusing. Here’s what I did for the hindquarter band, starting on a lunge line:

I put it on really loose for the very start, so they knew something was back there. Within a few minutes when they settled, I whoaed them and took it off and tightened it so that it would make contact and stay put while they were standing still. I didn’t want it slipping down and scoop-goosing their hindquarters once in motion. From there, work till the tension was visible while they were standing.

And I never trimmed the band, I just either moved the clippy thing back to take the slack, or put a half-hitch in the tail to stop it from flapping about.

I found that ~50% length was needed to keep the belly band from slipping back but 50% length on the hind quarter would pull the pad backwards. I loosened the hindquarter band until it wasn’t pulling the pad but still had good tension and didn’t change position around the hindquarters.

I would love to know specific programs everyone is using with the equiband.

My biggest gripe with the system is that I find the bands so annoying to adjust between different sized horses.

I used it on my bigger guy last year and I think it helped him quite a lot. I’ve been building up use (started with 5 minutes and now we’re up to 12 minutes a few times a week) with my young mare and I haven’t noticed as remarkable a difference with her, but she naturally carries herself better than my gelding did.

Here is the video I used to assist me with the fitting: https://www.youtube.com/watch?v=4Yz_ISrBld8

I also hear/read that it wasn’t as much about the resistance of the band, but the sensation of the band. Here it is: https://www.youtube.com/watch?v=e18qgigevhk

Both videos are from the EquiBand makers.

Short update - I have been using my Equiband system consistently for the last week and have noticed that my horse is learning to go a lot better both while using it and afterwards for the remainder of the ride. I start with a 10 minute walk and have been gradually adding trot and canter minutes. We are currently at 10 walk, 6 trot and 3 canter, then take the bands off and do 10-15 minutes more of work…

I mainly notice that he is pushing through from behind and over his back a lot more than usual. I plan to use it consistently for a full month and then reassess.

Have those of you who have used them been able to work up to a full 45 minutes in the bands, or is the idea to always use them for the beginning of the ride and then remove?

@Carried_Away i worked slowly up to a full ride (I rode in them every ride, adding 5-10 minutes a week). Now full disclosure-I have some health things going on so my full rides are 20-25 minutes right now as that is all I have the stamina for and I lunge for 5-10 (with the EB) before so that I feel like my horse is getting an okay work out until I have the capacity to ride longer. After we hit that whole lunge/ride point, I tapered down and use them the full ride 2x a week or so (that’s what is suggested in the product info),

I’m using them as part of a stifle/hind end rehab/strengthening program, so on the other days we do other PT type rides. He’s going to get his winter break here soon, but my plan for the spring when both of us are back us to continue to use the EB 2x a week (probably one dressage school and one hill conditioning day) and see how he does.

I also use them for full rides now that we’ve worked up to it. I started using the bands about 2.5 months ago and over that time my rides with the bands have averaged about 30 min. My dressage schools usually range from 30 to 50 min depending on how they go and what we’re working on. I’ve been using the bands for every dressage school at home, but not for dressage lessons or jump schools/lessons. Sometimes I use them on hacks but not always. The longest I’ve ever had them on was 70 minutes but that was because I kept having to stop my ride to troubleshoot my Pivo

, so he wasn’t working the whole time.

I have a little more anecdotal evidence for the bands now. My dressage coach saw my horse last week for the first time since March and was really impressed with his topline and general muscling. She said he looks the strongest she’s ever seen him, his walk has improved greatly, and he’s moving better behind in the trot (he’s a TB with kind of a short, choppy trot). He was only in very light work April - September while rehabbing from stepping on a nail, so I credit the improvement to the work done since I started with the Equiband in October. I can definitely say it has improved his walk pirouettes and reinback specifically.

I’m going to keep using it most rides for a while longer before I start tapering. Their website says “it takes up to three months to gain full strengthen and condition,” but we’ve missed days/weeks here and there between a shoeing mishap and the weather.

I wonder if there would be any value in using a band across the chest/shoulders? My guy tends to be tight in his shoulders so something that encourages him to reach forward more could be helpful.

I have a 3.5 year old that I ride a few times a week for a short period of time. Is there a particular reason why I shouldn’t use it on her? I’ve been holding off, worried that she’s too young.

I’m not an expert, but I would guess that using it on her would help her to understand the correct way to use herself earlier vs. “retraining” later.

The only contraindications for resistance bands are soundness problems. As long as the horse is sound there is no reason not to use them.
Sometimes if a horse is very slightly unsound, but not enough for it to really show, the resistance bands (whether Equibands, Pro-Core, or some other brand) will make the unsoundness more apparent by making the horse move straighter instead of off-loading the slightly sore leg. A lot of times it can be hard to tell if a horse is moving crookedly because it is weak or lame but resistance bands bring out the truth! If you hook up the bands and the horse moves well it is weak. If it moves more crookedly or limps you have a subtle lameness.

Our vet just suggested it for our 4yo getting back into work after EPM treatment. She just warned us not to overdo because it’s good but intense work.

The only contraindications for resistance bands are soundness problems. As long as the horse is sound there is no reason not to use them.
Sometimes if a horse is very slightly unsound, but not enough for it to really show, the resistance bands (whether Equibands, Pro-Core, or some other brand) will make the unsoundness more apparent by making the horse move straighter instead of off-loading the slightly sore leg. A lot of times it can be hard to tell if a horse is moving crookedly because it is weak or lame but resistance bands bring out the truth! If you hook up the bands and the horse moves well it is weak. If it moves more crookedly or limps you have a subtle lameness.

How interesting! I hadn’t thought of that, but it definitely makes sense. Thanks for sharing!

When bringing together a selection of exceptional products for riders and horses, it helps if you’ve been riding since you could walk. The Vicki Wilson store stocks a carefully curated range of high-quality gear, nutrition, clothing and accessories...

And her video explaining the product and application: 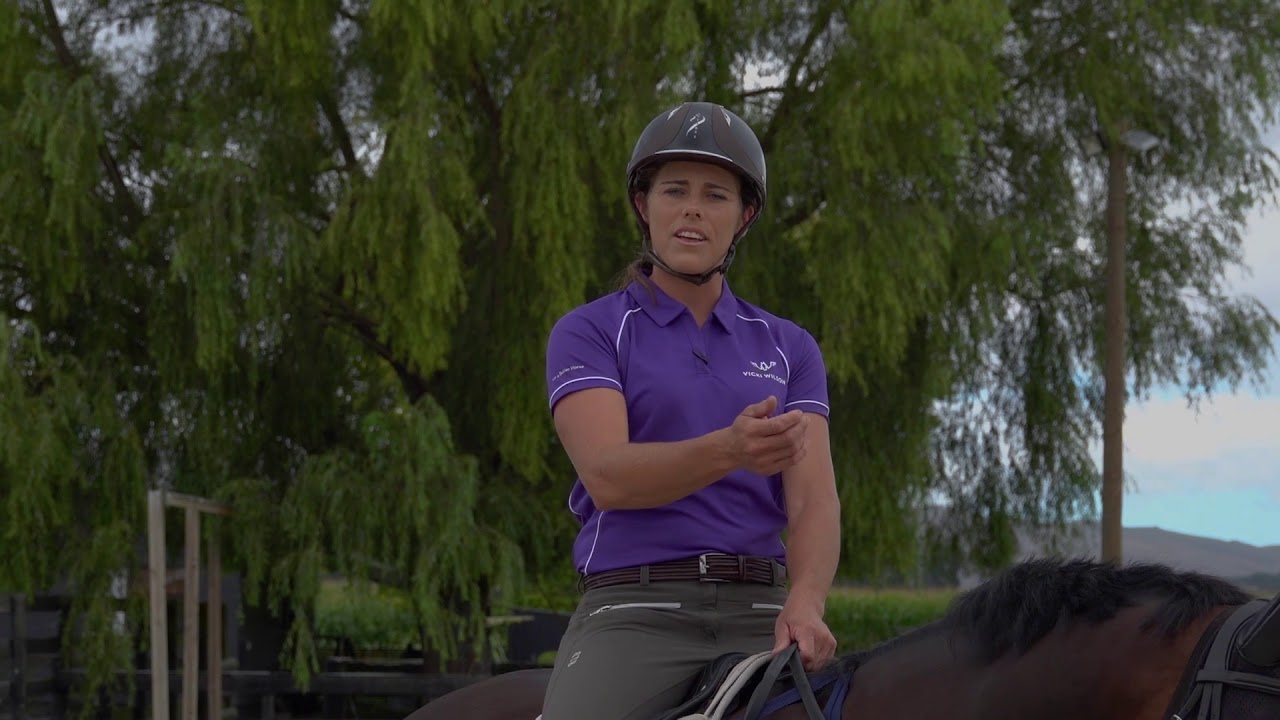