Thanks for reviving this thread! My favorite comment was “nature called at X” when my horse stopped and stretched out to pee during our walk across the diagonal.

After a new-to-me hot tamale of a mare tried to buck me off - twice - at the canter depart in first level, which is then followed by a canter lengthening, I received the comment for the very minor lengthening (and an appropriately low score) “conservative (smart).” I appreciated the judge understanding the “why” behind my riding

My guy reared all the way up on our first halt and salute a couple years ago. All I got was “tense”. Ya think?!

Love the comments that talk about a good partnership.

Got another nice one once in first level test about how they could tell I was developing my guy properly based on his muscling.

First show back after an 8-year hiatus, training level test 3 on a young gelding I was leasing. He spooked at the flowers, the judges box, the ground, I forgot to breathe and ride, and we counter-cantered the 20 meter circle at B. Got a 63 and a bottle of wine, and the comment “talented horse - not quite with the program today.”

Took green-bean to a schooling show. She took offense at the pink flowers at the letters and after the X-halt-salute, we did not continue working trot, we went full-pass-scramble-diagonal-to-the-right with both me and the judge saying ,“whoa there, easy there” until the steering was re-installed and we continued on our drunken-sailor-lurching way until the final halt. We also stopped to poop during the trot circle and our 7 tuned into a 4. Final comment “Determinedly ridden.”

Many years ago I rode a friend’s TB who went seriously behind the bit when he was nervous. It was pretty bad during the test. Judge’s comment: “Horse appears to be eating his toenails.”

Having sat with him many many many hours, this sounds like VHV

Remarks on my 38.696% T1 test: “Tactful rider making intelligent choices due to tension & resistance in horse today to avoid huge argument and possible danger. However, unable to perform test.”

Yes, I felt like I was sitting on an overfilled water balloon that would have surely exploded had I applied a leg aid. Still grateful for that judge’s tactful comments on a difficult day!

I rode under Hilda Gurney in a show where she commented that I was “bouncing on my horse’s back”. Duh. Horse was super tense. To the point that I almost scratched. But, my BFF who was with me couldn’t see any lameness and we were trying to recover from a show wreck the previous year so I preserved through that test to get her some mileage. I kept grumbling that Hilda should try sitting that trot.

Well, Hilda being the great judge she is judged what was in front of her. The next day, things were very different. We went in and got 70% and high score of the show

What was going on was that the poor horse had an ovarian tumor. When she was in heat, she was painful hence the terrible tension. When she ovulated, the pain switch got turned off. I had her spayed that winter and problem solved. It was a solid tumor, not a granulosa cell tumor so when she built a follicle…ouch.

Probably not the goofiest comment but one that had me kind of pissed off. I am not that bad of a rider…but if your horse won’t give you a place to sit. I still wanted Hilda to give it a try

Great that you figured out what was going on with your mare to address the tension. For context, judges are supposed to judge and comment only on what they observe. They are not supposed to make assumptions about root causes beyond what they see in the test, or suggestions on what you can do to fix it (they are explicitly not supposed to train while judging). So I don’t know that you should take the comment personally as it sounds like she was just doing her job

Which is also why the next day, after a presumably much better ride, she scored you appropriately

Circles are not potatoes. I scribed for her and developed a short hand of scribbling a cartoon potato then going back to add the comment.

Back in the early 1990’s, when dressage was just beginning to become a thing here, our gigantic lesson barn hosted a dressage schooling show. I leased a slightly odd-looking, extremely quirky leopard appy. He could jump the moon & had once bucked a hapless instructor off in protest of boring flat work. Fortunately, he was fond enough of me to humor this new flight of fancy. The judge commented his color was “a bit loud.” For weeks after, the peanut gallery would pantomime having trouble hearing when we walked past

My favourites would be
nice try after my young horses first outing, whilst he was good, it was at warp speed and the whole test was me grimacing and him having the time of his life showing off his prancing to the judge.

A second would be “bold” for a lengthened canter, we got going and didn’t stop lol. We’ve had this a few times which always cracks me up as that’s certainly one way to explain it

Lastly would have to be a friends comment as I trotted down the centreline, went sideways instead of halting then the horse promptly stuck his nose in the air as I saluted. I could hear my friend announce to everyone around her, He looks like the donkey from shrek before falling over laughing. The judge gave me a generous 2 and I had to try hide my giggling as we attempted the rest of the test.

I have been the scribe to “conservatively ridden (smart choice)” when riders clearly did the right thing, but the judge had to score what she had seen. 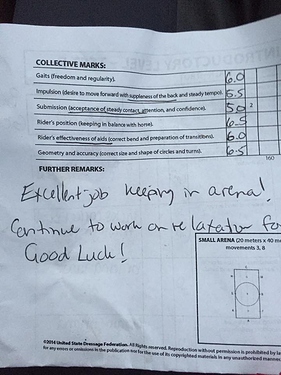 Horse was an 18 y.o. lifelong fox hunter doing a little starter CT for funsies. He had forgotten about our months of work installing steering and brakes in the show environment

but he was actually a joy to ride, I love a good hunt horse!!!

Got another nice one once in first level test about how they could tell I was developing my guy properly based on his muscling.

This is the ULTIMATE COMPLIMENT! So nice

“Good Luck” was all one judge wrote after my mustang went sideways almost the entire way through the test. I guess she was trying to tell me something.

Hahahahahahaaaaa!!! That’s a great comment! and Hey, the judge gave you a 6.5 on impulsion and rider’s position! And even geometry and accuracy, which can be difficult on a horse with a 5 on submission! Hahahaha! GOOD JOB!

During my OTTB’s first show, I tapped the gas a bit too hard and we ended up with a beautiful, balanced walk-canter transition in our Intro B test that was nicer than any I’d ridden on purpose up til that point. Of course we got “Not required at this level :)”. He’s completely happy to putz around behind the leg so it was a surprise.

We had a bad test at a schooling show this past weekend, but luckily short of a complete meltdown, and the judge said it “was not so bad”. It was very charitable of her, I was grimacing after our final halt.