I foster kittens for the local shelter and I ended up adopting one from my last litter.

I got her and her brother when they were 4 weeks old and they were very ill. They both survived but they both have constant low-level respiratory symptoms and sometimes flare-ups. They’re fully vaccinated now, but it looks like they were already infected prior to being vaccinated.

Are cats with chronic FHV always contagious? I don’t want to risk any kittens catching it from her so I’m afraid I’m going to have to stop fostering.

(And yes, I’ll ask my vet, but I thought the knowledgeable COTH posters might be able to give me a quick answer.) 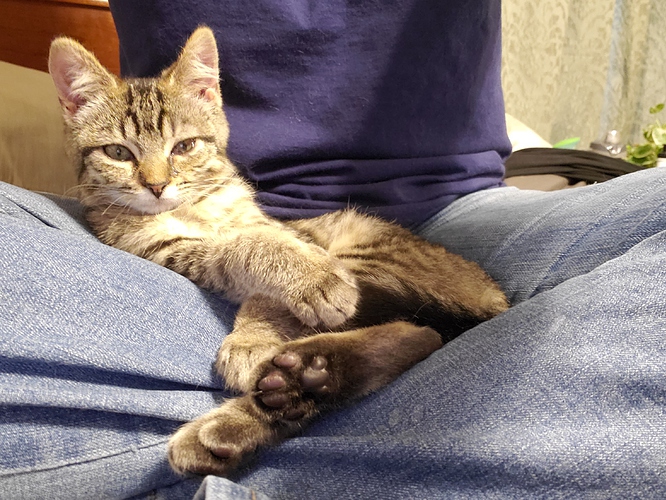 It’s my understanding that 86% of cats out there have herpes. Whether or not it shows itself is another thing. I had a kitty with herpes and it had settled in her eyes. She was very prone to URI and eye infections. Fortunately, I had a vet that had worked with cats like her before and we were able to settle on a routine and meds that worked for her. She lived a good long while until cancer got her.

I love the little face - looking for all the world like displeased royalty. And those ears! A mouser for sure.

What did you do to prevent the eye infections? My cat has the same thing and my vet suggested Lysine which I am giving her, but it doesn’t seem to work very well.

I love the little face - looking for all the world like displeased royalty. And those ears! A mouser for sure.

She’s definitely a dedicated hunter - she can’t resist anything with feathers. (Fortunately for the local bird population, she’s an indoor-only cat.) Here’s a pic of her hanging out in her favorite ambush spot. 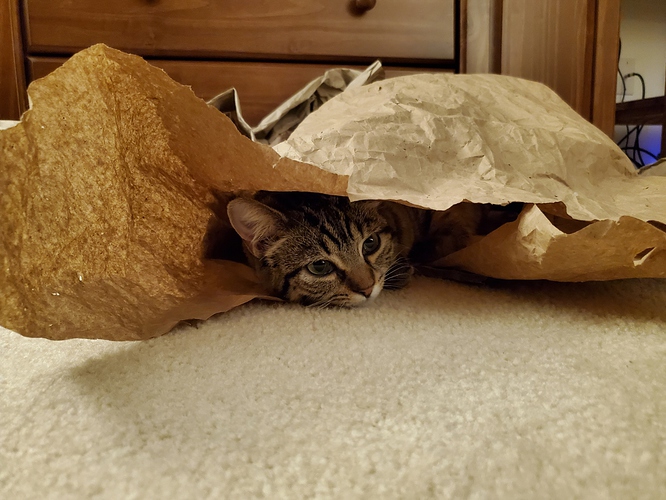 Thanks for the info on herpes! So far, it doesn’t seem to be bothering her too much, just mild respiratory symptoms. Hopefully she does as well as your cat did!

When one appeared, we had to give her clindamyacin. Otherwise she was on a lubricating eye drops (regular OTC for people) to keep her from getting dry eye. And keeping the stress low. And yeah, I did not find the lysine helpful.

I had one with nasty chronic herpesvirus (found orphaned at 2-3 weeks under a house). Always snotty, would sometimes tear his nose up scratching. I tried all the things over the years, nothing really made much of a dent. He was sweet & seemed happy despite his grossness. I did finally put him down when he was 11 bc I was making a big move & stress would cause breakouts, which were tough on him, & he was always more anxious than the others anyway. He had a good, happy, safe life with lots of petting & basking in warm floor spots. He lived with two other adult cats indoors & never had any issues with transmission- at the time, from my reading & talking to vet, adults were not at risk, just kittens. It was almost 10 yrs ago when I let him go, so I don’t know if the data on that is still the same.

Good to know that your cat was happy despite the flareups.

Marie seems happy enough too at this point - hopefully she does as well as your cat!

I’ve found the Lysine to be helpful but in much larger doses for my cats that were having herpes issues. My vet ophthalmologist recommended 1000 mg a day for my most affected cat and that helped. My others get 500 mg a day.

I wouldn’t worry about your kitten spreading it.
The rescue I fostered for said they stopped testing because everyone had it already. Just most don’t show symptoms.

I’m using the tomlyn brand powder. It seems tast as my picky eaters don’t mind it sprinkled in their food.

The rescue I fostered for said they stopped testing because everyone had it already. Just most don’t show symptoms.

That’s interesting. I foster for a public shelter and I think they’re good as far as public shelters go, but they have very limited resources so they don’t do a whole lot of testing. Every litter that I’ve had has had some illness or another and I rarely find out exactly what they have. Most of them have eventually recovered fully.

I had an elderly cat while I was fostering and I always kept him strictly away from the fosters, even though he was fully vaccinated. I’d have felt terrible if he had caught anything from the kittens.

If most of the kittens are already exposed, then maybe the risk is minimal if I keep Marie separate the way I did my old cat.

Gratuitous pic of Marie sleeping after she had worn herself out “helping” me wrap Christmas presents. Just because. 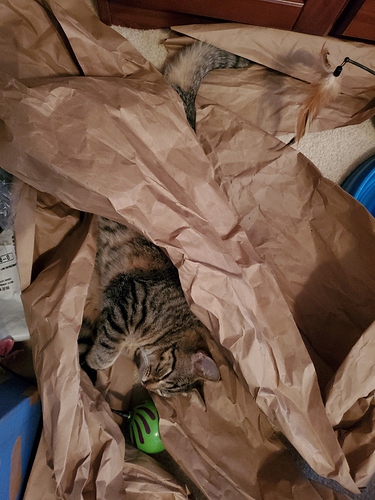 I have always assumed most cats have it and don’t really have symptoms. For kittens, there are antiviral eye drops you can use. There are also antibacterial eye drops to control bacterial infections.

If you are using antibacterial eye drops only, you should try the antiviral eye drops.

As for respiratory symptoms they generally clear up on their own. I would also check FIV/Felv status. I’ve never had kittens that didn’t get over the infection so if it doesn’t clear up in a couple weeks I would be worried you have something else going on.

As for fostering other cats I would wait until your cats no longer have symptoms. Any new fosters should be quarantined for at least 1 week, but it’s safer to quarantine longer than that. I would probably just keep any fosters separated from your own cats.

I’m out of town and the catsitter just sent me this pic of Marie.

Gotta love cats! Always the epitome of grace and elegance!

So I may have found a solution to the disease risk with fosters … switch to puppies?

I’m actually not in a position to foster puppies long term but when the shelter called with a “foster emergency” and asked me to take three puppies, I couldn’t say no. They were about 6-12 hours old when I picked them up and I am only holding them for a couple of weeks while a long-term foster is found, but I’m going to enjoy their adorableness while I have them. 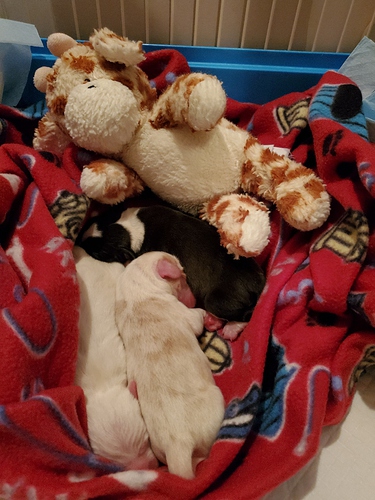 I have no idea what breed they are. They were born at the shelter but I didn’t see the mother. Unfortunately, she rejected them so they need to be bottle-raised. One has really interesting coloring - looks like maybe he’s a red merle? The two girls are all white and black-and-white.