We have 30 ac hobby farm in semi-rural/residential area. We have four very loved cats that are all fixed, vaxed, and are in/out during the daytime but always locked in the house at night.

About a year ago we started seeing a mostly white feral show up (we call him Patches). Last summer our lead cat and apex hunter, Vince, ran him off repeatedly. We didn’t see Patches over the winter, but he showed up again this spring. Patches seems to have taken up residence in our hay storage barn and is now repeatedly getting into fights with Vince. Vince remains undaunted, but has come back with fur missing and bites on his ears. Vince is very upset in that house in the evenings when Patches can be seen making his way to the barn, storms around the house yowling, becomes extremely tense and lashes out at our other cats. Can’t continue this way.

I’m not sure if Patches has a human family, but I doubt it. Patches is extremely skittish around people, have never gotten closer than 20 ft. Patches looks scruffy and skinny so I have been putting out food and water for him in the barn. One of my neighbors keeps baited live traps set in his hay barn for skunks/raccoons and said he caught this cat once and released him.

I would say ‘live and let live’ but this situation is not good for Vince and I worry that Patches will get eaten by a coyote. I have no idea if Patches is male or female or his age, but I suspect he will not make a great pet and even trapping him may be challenging. I plan to reach out to my local resources for a feral adoption/rehoming service. I need advice on what to do, have never tackled these issues before.

Can you livetrap Patches?
Since your cats are in at night, set the trap then (so you don’t catch one of yours

)
Then contact a local TNR or (if you can) get him/her neutered if not already done, tested for FeLu & vaccinated.
Once that’s done, Vince may be more accepting.
If not, retrap & relocate through the TNR.

Live trapping is the way to go - since he’s already at home in your barn and you already feed him, it should be relatively easy to do.

Just be aware that you may be on your own when it comes to help trapping feral cats.
Also, in most cities and counties if you feed a stray, it’s yours whether you want it or not.

Of course , you may be in area where there are groups that can help, or you have good Animal control .

I would bet Patches is a fairly young male. If you can get him neutered, wormed, vaccinated, and treated for fleas it might help settle him, although those male hormones can take a while to deplete. Also, he may not be truly feral; he may just be a very skittish stray. If so, he may become friendlier in time. In any case, it’s too soon to know for sure whether Patches could make a good pet.

I’ve taken in stray male cats, and it can be a challenge to integrate them with the resident cats. One male cat took several months to decide he wanted to live here, but now he’s everyone’s lap buddy. He spent the first 2 years challenging the apex cat and getting his butt whipped, but he finally mellowed out. I tried to take in another male stray, but he was too aggressive with my other cats so he went to live with a friend who treated him like a god. I’ve also had stray male cats who lived in the barn for a while and then moved on.

Good on you for trying to find the best solution for both Patches and Vince. You asked for advice–Whenever I have a stray come by and stick around like Patches, I try to at least get him neutered, vaccinated, wormed, and treated for fleas; and I make sure he has food and water. If he wants a home and will behave reasonably, I let him decide if he wants to be a barn cat or a house kitty (so far they’ve all eventually opted for the house). If he wanders off again I figure I’ve at least made his life a little better. My one rule is that my existing resident cats always come first. If the newcomer can’t assimilate with them, then I look for a new home for him. Also, I don’t expect everyone to get along right away. It can take months and months.

Look up local TNR clinics or groups and see if they can let you borrow a trap!

Also use some stinky, extra yummy food in the trap to get him. Something like tuna or the really gravy heavy type cat canned food.

Good advice folks! I have a large live trap that I hope will work. I’m researching TNR services in my area. Will update COTH on the outcome.

You may also get him neutered and never see him again

I had this happen when I lived in the city.
Big orange Tom came a’callin’ on my little calico female.
She’d hiss at him through the sliding screen door. My other 2 males ignored him (all neutered).
We named him Boyfriend - after the line in Young Frankenstein “He was my boyfriend!”
We left that screen open enough for ours to go out in the yard & on one occasion I found BF in the house munching from a bowl of cat food.
After a hard Winter - I’d put out a box lined with a blanket for him - we didn’t see him for a while & I assumed he either found shelter elsewhere, or hadn’t survived.
Then one Spring day he showed up, turned around & displayed the bright yellow Badge of Betadine where his “parts” had been.
And he had a collar on

More questions!
I found a local clinic that will do a feral spay/neuter with vaccinations and fleas/tick/ear mite treatment. However, they need me to make an appointment and are scheduled out to October.

How do I go about trapping Patches so as to keep him trapped for the shortest time possible, but also ensure that I can deliver him to the appointment?

I noticed a feral cat hanging around my house in December, who was so savvy she didn’t get trapped until March. She was smart and would somehow eat the food without triggering the trap, but I guess she was really hungry one night because it finally paid off and I had her trapped! She is now a totally reformed house cat and a total love.

If you end up trapping Patches between now and your appointment, keep him in a large dog kennel/crate either in the hay barn or somewhere nearby. He will be fine; if anything, it would be a good time to naturalize him to humans and have him at his best/healthiest in time for the surgery/appointment. The ferals fatten up really quick once they have a regular source of food and no competition.

Once Patches is neutered, you should see a reduction in the amount of male-male aggression. It’s usually at its worse if one or two parties are unaltered males (toms).

How do I go about trapping Patches so as to keep him trapped for the shortest time possible, but also ensure that I can deliver him to the appointment?

Start feeding Patches near the trap that you have set out but secured open. (No risk of it closing.) Slowly move the food so it eventually ends up all the way in the trap. (over days or weeks, depending on how willing the cat is.)
It will not take long for you to be feeding Patches in the trap. Then, when you need to trap Patches you set the trap up so it will close, put the food in and you have trapped your cat.

All I ever saw was an orange blur, though his partner had relocated upstairs almost immediately

He’d probably still be there if I hadn’t needed work done in the basement.
Now he’s a fat orange housecat & neither one has shown the least desire to ever go outside. 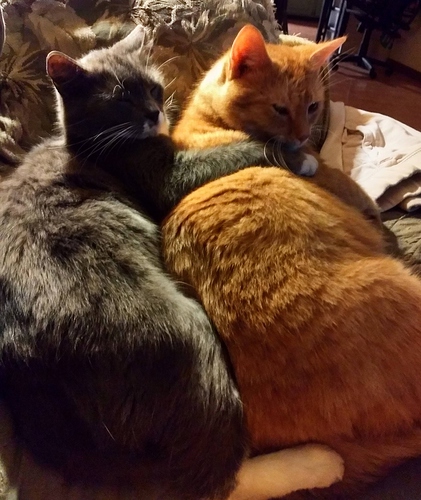 So far, so good. I successfully fed Patches wet food in a deactivated trap last night. I found a perfectly sized cardboard box that fit over the trap that should help it feel more cat cozy.

Next step is to make the vet appointment!

Patches has a vet appointment for Wednesday, October 12th. He’s been eating wet food every night in the trap.

The clinic says he must be delivered in a live trap since he is a feral. How long can I keep him in the trap before the appointment? How do I give him food/water in the trap without accidentally releasing him?

A guinea-pig-type rollerball waterer that pokes through from the outside may be your only option, but if he’s thirsty, he’ll probably figure it out.

For food, you can roll up a napkin to get it onto the floor of the crate, let it unroll, then drop some dry food onto it from above.

But you’ll need to withhold food and water before surgery anyway, so depending on when you trap him it may be a moot point. Good luck!