Fluid Filled Cyst on filly's head beside her ear

My yearling Appaloosa filly had what appeared to be an abscess on the top of her head just to the right of left ear, about the size of a quail’s egg. Had the vet out to drain it and turns out it was a cyst (epidermoid) with a rather gristly case/shell and was filled with a viscous amber colored fluid. She aspirated it and removed as much of the casing as she felt comfortable doing in the field hoping it wouldn’t come back. Warned me though that it might and could and damned if I dont think it is so I’ll be scheduling to take her in to the clinic for it. I’ve never seen such before. Anyone have experience?

Could it be a tooth bud?

They are bizarre cysts with tooth-like matter at the core. As I recall, they are tooth cells (a tooth “bud”) that migrated during fetal development to the wrong site.

An older broodmare we owned came with one next to her ear that drained off and on. It was not really possible to surgically fix it as the channel was too long and deep. But a good friend of mine bought a young warmblood that had a knot under his forelock, and it turned out to be a tooth bud. Surgery fixed his fine, but the stuff that came out was… gross. And unholy.

So maybe ask if that’s a possibility?

She did not think so but this did seem to have a long tail/channel which she didn’t feel comfortable digging after in the field which is why we’ll be going to the clinic for better imaging/visualization of the darn thing. Of course, it couldn’t be simple.

Horses never make anything simple (ask me how I know). I’m glad you’re taking her in and getting to the bottom of it. Please let us know what you find out at the clinic and the course of action. Hugs to you both. It will be OK.

Is it weird that I want to see pictures? Sounds semi-gross and very interesting.

I hope they can get it all fixed up at the clinic. Report back!

Is it weird that I want to see pictures?

If it is weird, then I am just as weird.

We so need photos. 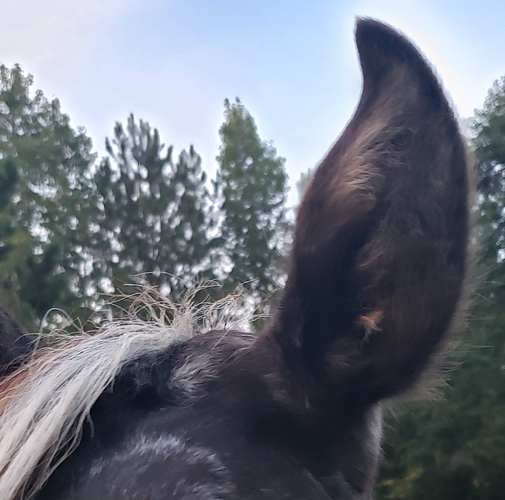 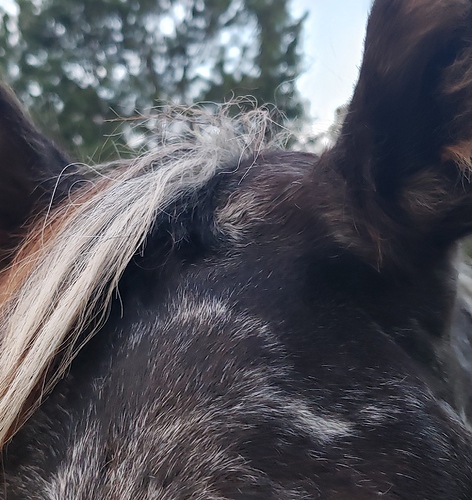 These are before photos showing the bump beside her ear. I do not have photos of the removal procedure but it was quite squicky what with all the gelatinous contents of the cyst being expressed out.

currently I can only palpate what feels like a returning bulge beside her ear. Could be scar tissue, but I doubt it. Will be monitoring to see if it progresses, which is what I anticipate, darn it.

Only because I’m weirded out by tooth buds now… I’ll be interested, too, if you can get an xray of what lies at the bottom of the channel. Or get a better idea of what fibrous matter is still there, causing the lump and the continual fluid build up.

Will say (for all you gore fest fans) that the tooth bud of contorted, ungodly flesh and bone removed from the forehead of my friend’s warmblood was ultimately about the size of an egg.

Unless the capsule and its contents are completely removed, they do tend to recur - which is actually the wrong word to use since the original lesion was never completely excised.

I usually removed them via a single excision just down to the capsule, and then pressing around the edges to pop out the intact cyst. This works since no remnants are left behind, and it is a pretty simple procedure. Once the capsule is violated and contents escape into the surrounding tissue, then the procedure gets messy.

Great to know. Thanks!

I don’t like the fact that it has a channel.

If it is poll evil, it is really not in the right place for poll evil, but it is usually caused by an ill fitting bridle, halter or going over backwards and landing on the poll. It is related to fistulous withers and has the same bacteria that causes abortions in cows.

I thought the same thing! And because of Dr Pimple Popper, it occurred to me that unless the cyst sac was removed it would continue to refill and need to be continuously lanced.

Gross for sure, but that Dr is so deft with a scalpel.

Not poll evil. No injury or sign of it, and she’s just a yearling and not kept in a halter.

Channel is probably the wrong word. Capsule was the word I was looking for, with an anchoring tail? going deeper than the vet felt comfortable going after in the field. I imagine the thing in situ, looks like an elongated egg.

Like I said, first thought was an abscess, given the location, like she had gotten maybe a piece of woody matter stuck in her head from bumping it, which then walled itself off. We didn’t realize it was a cyst until it was opened to drain. The vet then tried to excise the capsule, but couldn’t quite get the whole thing and here we are. Next time will try to remove the cyst intact in the hope it won’t come back.

Of course, this is a super nice filly who is sweet as pie which at least makes caring for her not difficult.