I’m pregnant and have been using the natural fly spray this year and I swear the flies just laugh at me. It hasn’t helped whatsoever, and my horses are miserable! They go out on shoo fly boots and masks but it’s too hot and humid where I am for sheets.

I’ve looked up most of the ingredients in the more potent fly sprays and they don’t seem to be super safe during pregnancy. But then I wondered if I could apply with a mitt so I wasn’t breathing it in or touching it, if that would be safer? Any idea? Or any other options that are safe and effective?

Horses are already on simplifly, which doesn’t seem to be working this year. Does smart bug-off work? And advice welcome, the flies are awful this year!

Are the Ecovet ingredients as bad as the others? It works decently this year and much better than the Ultrashield red. It was like spraying with water.

Are the Ecovet ingredients as bad as the others? It works decently this year and much better than the Ultrashield red. It was like spraying with water.

I’ve never seen those ingredients before, all the other fly sprays I have looked up have pyrethrins in them! That might be a good option… does anyone know? I’ll have to do a quick Google search!

This is about where I am at too.

I’ve been using the Black Ultrashield and it seems like it helps for like 5 minutes after application. I am running low and am on the lookout for something that may work better, but my hopes aren’t high.

Oh I hear you! Mine are normally out 20+ hours a day, but I’ve been having to keep them in during the day during the worst of the heat and bugs. I just don’t want to get to the point where they have to be in all day long…right now they’re in from about 3-8 when the bugs are the worst, but they’re starting to come up and stand at the gate earlier and earlier

Have you tried the wipe? Green can. It doesn’t last as long as previous years this year but pretty good. Here, anyway.

I wear gloves when I put it on… It’s amazing what I’ll put on the horses, but the alternative is flies and gnats.

The Ecovet is almost as good this year. It smells soooo bad though! No wonder it works. Lol

Ive not, I will check them both out, thanks!

The way Ecovet burns my lungs, there is no way I would have used it while pregnant.

I did the same thing with natural fly sprays while I was pregnant. As a matter of fact, I still keep them on hand for when my toddler son is in the barn with me.

My favorite natural fly sprays are Equiderma Neem & Aloe Herbal Horse Spray and Farnam Equisect. They seem to do something. Ultrashield Green, Swamp Gnat, and Clac aren’t too bad. Most of the others are a joke.

Otherwise you could apply fly spray outdoors so and with a mitt like you suggest, so at least you’re minimizing inhalation and contact.

Finally, a truly different fly repellent that has no oils, PBOs, Pyrethrin or Permethrin! This spray is powerful enough to repel biting, blood sucking insects but gentle enough to use on animals with sensitive skin. With regular use, you will even...

Here is a link describing Ecovet and the ingredients.

I am not a doctor nor an expert on hazardous chemicals. My experience with Ecovet is that it has a tendency to cause a burning sensation when you breathe. It’s not so much a bad smell as much as an actual burning sensation.

I have no idea whether or not that’s harmful or how it compares to traditional fly spray.

I will say that of natural fly sprays, my experience is that Ecovet works best - but people in a boarding environment will act like you’re spraying agent orange.

I know folks who use 1/2 and 1/2 EcoVet with another product. It really cuts down on the negatives of the EV, and still allows most of its effectiveness.

You can always get a pack of N95 masks to put on when spraying. IMHO you will use more product, and spend a lot longer, trying to wipe on whatever you’re going to use.

The active ingredients are all acids. My chemicals database is down for maintenance at the moment but I’ll share the hazards of each once I can get in (former chemicals hazard communication advisor here).

Here we go. Skin/eyes hazards for sure and pretty bad for the aquatic environment. 5% each is a pretty high treat rate in that spray too. They provide the safety data sheet on the spray itself here too. As a whole it’s skin and eye irritant. 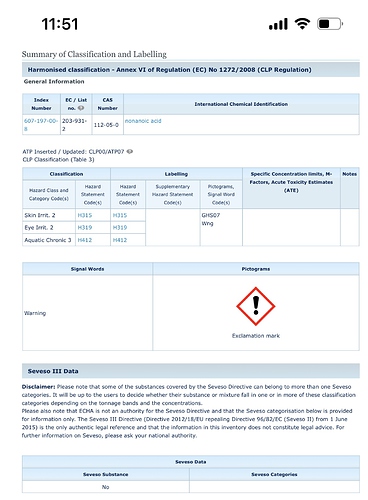 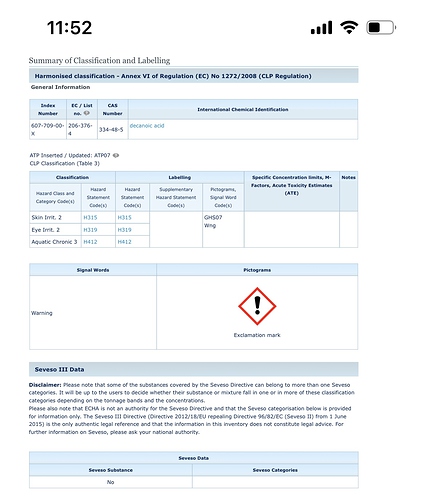 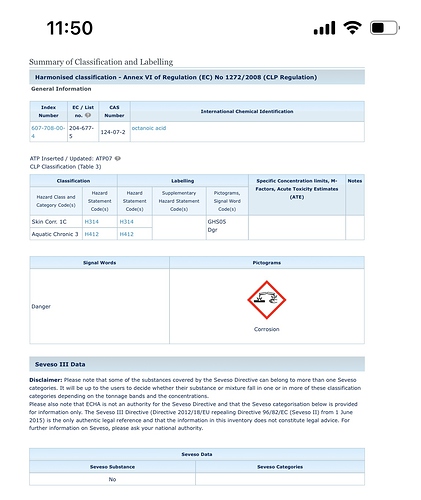 I’ve always used the chemical stuff, but my friend in Florida uses and likes this. Has anyone else tried it?

Some of the herbal sprays worse than the chemical brands, so I’m always reluctant. (Not pregnant, btw, but some horses are allergic to the regular stuff.)

I’m also preggo and since I have tons of masks around anyways, pretty easy to grab one for ecovet. My one mare HATES it so I have to spray her with a fan on low from the front

Has anyone else tried it?

The unfortunate reality of fly sprays boils down to 2 things:

Right now I’m rotating around 4 different sprays, and currently, what works best during the day is Absorbine Flys-X (and that’s one of the less $$ ones), and DuMor Platinum (the cheaper equivalent of Pyranha Wipe N Spray yellow bottle). I’m finding that Bronco (which I haven’t used before this year) and Absorbine Bug Block work well enough for the night.

Absorbine UltraShield Ex (black bottle) has worked well here for 15 years, but it’s one of the more $$ ones so I try to reduce its use.

I tried Endure last year (holy crap that’s $$) and didn’t find it any better than the UltraShield.

Next time I buy, I’ll go back to Repel-X, which I haven’t used in a long time, as the cost effectiveness of a concentrate to mix with water is appealing, in a product that is likely to work well enough at least.

I always bought the Pyranha in the yellow bottle. I think the barn I’m riding at uses that in combo with the Ultra-Shield. But yeah, I used to ride at a place that used apple cider vinegar, insisting it was nontoxic and just as good…it smelled nice, but was as effective as water.

I really like Clac Deo Gel. My hang up is how the pyrethrin- central fly sprays kill everything, not just flies. Including beneficials like Bees, dragonflies, spiders, leafhoppers, beetles, etc. I limit pyrethrin sprays after I watched my bat population take a nosedive when I started spraying the horses aggressively. If I use it at all it’s in the shed on a flymask before I ride. There really is no one perfect answer. It’s region and climate dependent.

The clac works great against small gnats but does nothing for B52s.

My hang up is how the pyrethrin- central fly sprays kill everything, not just flies. Including beneficials like Bees, dragonflies, spiders, leafhoppers, beetles, etc.

The more I know

I prefer these types because they also take care of ticks quite effectively even if the flies are more hit or miss.

I echo everyone else’s comments on Ecovet - it does work pretty well but it’s miserable to apply!