Beagle cross, 5 years old, with heartworm (they pay for treatment). If she fits in, we can adopt her when she finishes her treatment. She’s shy, but gets along really well with our GSD and spaniel. No issues at all. She’s submissive and younger than our female spaniel. The GSD adores her already (he’s 2) and they seem to want to play together.

Should I be worried about two female dogs in the same house? Does the breed matter? Both are more docile breeds that work in packs (our spaniel is field bred). 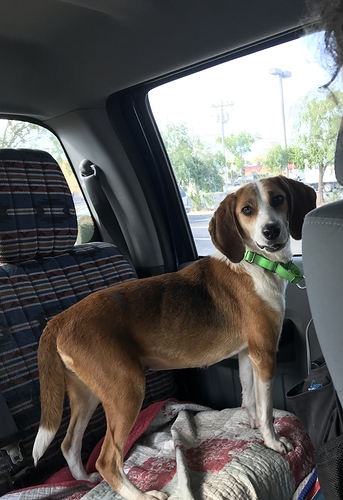 Way more hound than beagle I think. She’s lovely. Just monitor. I will say of all the dogs I’ve rescued the bitches have given me the most pause. But it’s usually early on that trouble breaks out.

PS. I love a dog who looks like a committee put her together. And never communicated. I’d rescue her in a heartbeat. I hope she works out !!

I’ve never had issues. Rules are rules from day 1! Don’t create situations where the dogs start to fight over whatever or develop jealousy.
It takes several months until a dog ‘feels home’ and on this journey it is up to you how supportive and educating you are. All the best!

Thank you for the responses.

Also, AAAAAAAHHHHHHHH! I can’t stand the errors in my original post. It was from my iPad right before bed when I was sleepy. I might try to fix those. twitch twitch

She was only at the pound for a week. They’re full already and lots of puppies coming in, so she was at risk for being PTS. Especially with the heart worm issue.

We didn’t plan to do this. We trapped a feral tomcat that was beating up our two, tame, barn kitties. We took him there to be PTS. Now, they TNR (trap-neuter-release) only. So, you have to pick the feral back up after it’s fixed. I was a little flabbergasted. I don’t want any cats but our barn kitties because I like songbirds. Anyway, so this feral tomcat actually had an infection and some sort of skin disease, so they did put him down. They were sympathetic about our barn kitties being injured (one was adopted from them, after all).

They never have any suitable dogs that would get along with ours, so it’s always a safe trip. Except yesterday. I brought our two dogs back to meet her and it went quite well.

She was a stray and spends a lot of time looking out the window and watching passing cars, as if waiting for the good-for-nothing people who didn’t give her heart worm meds. So far, not a lot of barking. She had one episode this morning in the crate. We ignored it and let her out agin when she was quiet. She needs crate time for alone time and to get through the spay recovery and heart worm treatment. Lovely dog. Not a lot of manners and generally unfamiliar with house rules, but potty training seems decent. She’s small enough to keep off furniture easily. She loves the new food but isn’t sure about toys. She does play with our GSD, though. Not sure what we’ll call her. Not sure if she’ll stay with us after the foster period, but she’s got a chance now and time to learn how to be a family dog.

They all get fed separately and special chews will be doled out to her in her crate. I haven’t seen any food aggression towards people, but not going to take chances. We share our attention with all and that seems to be acceptable. No growling, fussing, shoving by or anything. I hope those are good signs. The best news is that our poor spaniel isn’t overwhelmed.

My MIL brought her dog over once and it was a mess. We had to keep the two females in separate rooms because our girl was so afraid and the other was so possessive of my MIL (who has no control over the big Lab/Pit cross). MIL doesn’t stay over anymore because she “can’t leave her dog alone” and we won’t let her bring that monster with her. No loss there, lol!

It all depends on the dogs’ personalities. I have 2 females, 1 male, and occasionally foster. My 2 females have to be managed a little bit because while they get along 95% of the time, there’s that 5% when their personalities clash and they get into it if I don’t nip it in the bud. Adding a foster, I’ve had no problems with male or female. Actually, our last female we foster ended up really evening out things because then we had team basset and team berner (I have a Bernese and the foster was a “bernedoodle”) and everyone had a suitable play buddy.

So, it depends. Remember dogs can change a lot - for better and for worse- as they get comfortable with their new situation. I like to refer to the rule of 3 (3 days, 3 weeks, 3 months) when taking in a new dog.

They all get fed separately and special chews will be doled out to her in her crate. I haven’t seen any food aggression towards people, but not going to take chances. We share our attention with all and that seems to be acceptable. No growling, fussing, shoving by or anything. I hope those are good signs. The best news is that our poor spaniel isn’t overwhelmed.

It sounds like you’re setting her up for success. Most fights (not all, but most) can be mitigated by feeding separately and being mindful of ensuring neither dog feels overwhelmed. Post heart worm treatment, joint walks are other nice bonding activities that allow good distancing, especially if you have a second person.

I know a lot of people with two females and no issues. It really comes down to personalities and lifestyle management.

Thank you both for reassurance and ideas!

She did well on her walk with our other female this morning and she had some time in the house. She was restless, so back to the crate with a chew for a bit. A little tour of the farm and she met Tony the mini donkey through the fence. Licks and nuzzles exchanged. 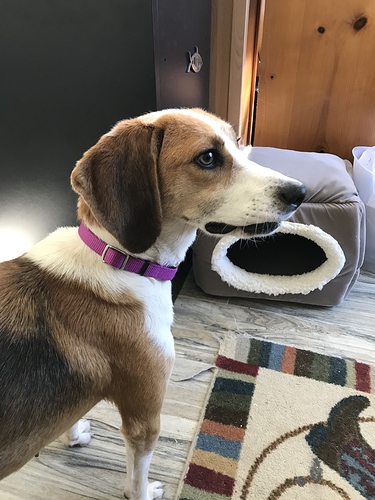 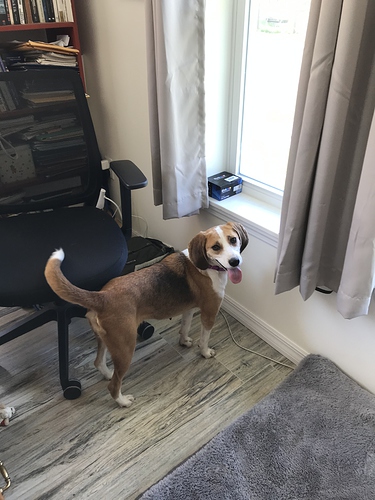 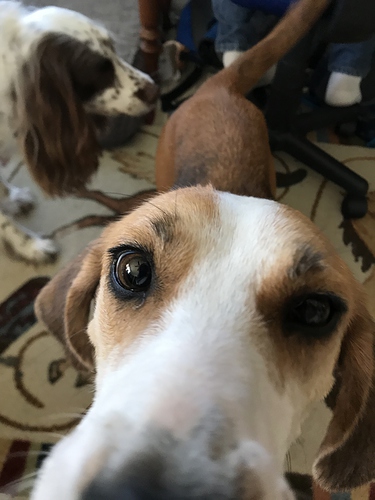 I think I know how she became a stray. She slipped her collar easily once on the walk. I tightened it a little, but she tried ducking out of it when she smelled something interesting. She starts and stops a lot, but having my son walk our other dog in front helped with that. What sort of collar or harness do people use for hounds?

Try a martingale collar. Keep a flat collar on when loose or in the house, use the martingale for walks.

I’m on my third pair of females (all spayed, and a total of 4 dogs, two at a time with overlaps) and have not had any problems with them at all. I do keep an eye on my current pair, because the puppy occasionally shows some body language I don’t like and will steal things from my other dog, but it generally is peacefully resolved, either with my older dog just giving up, or with a quick correction which the younger dog respects.

We have a martingale for our spaniel. It worked great on our afternoon walk on the farm. Yay!

I’m a total cat person and this little mutt is adorable to me. She has a sweet, goofy quality to her. Thank you for saving her! I hope she fits in well.

I think her name is Luna. The pound called her Fiona, but that’s our cow’s name, so we found one similar.

We have a good update on little Luna.

We were walking her near the chicken coop when a rat darted out from underneath to head for the woods. Luna snatched it up and snapped it’s neck immediately! She was so proficient that it was amazing. She went into major hunt mode looking for more and trying to crawl under the wood pile. Then it hit me. Her breed. A quick search and I think I’ve got it: Rat Terrier/Beagle cross. She looks like the pictures I could find on the web. They call them Raggles (ugh).

Anyway, killing a rat on a farm is pretty much gold medal level, so she was the champion for the day. Even our other two dogs were impressed.

Also, the only time she’s still is in your lap. We have discovered this and there is no turning back. Now, she is looking to take her rightful place on the family laps.

Look who else is smitten with her… 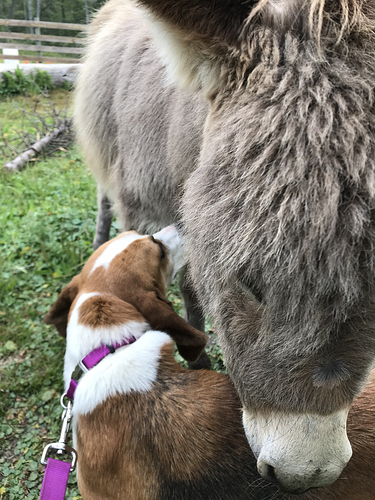