My 12 year old daughter’s 7 year old Paint mare last year had some bucking issues when going around a corner at the canter. Not a full fledged buck, more hunching up. It happened at a show, in both classes that they did that night. I had the chiro out the following week, she did some adjustments and told us the saddle didn’t fit properly (which I think was the main problem). Switched to a properly fitted saddle, never happened again. Until last night at a show.

I called the chiro this morning to schedule an appt, but it also dawned on me, could it be the girth? When practicing and in lessons, they always use those cheap fuzzy girths, which the horse seems to find comfortable. The ONLY time they use the leather girth is for shows. This is only the second canter show they’ve done this season (she’s done some WT shows with no problem, but even with the bad fitting saddle/pre adjustment the problem only manifested at canter, not the trot). The first show it was muddy. The horse doesn’t care for mud/puddles, so I think she was more focused on not slipping than anything else.

So both times the bucking has happened, it’s been shortly after the canter transition, going around a corner, at a show, in the leather girth (elastic at one end, girth is same width the whole length, not contoured). This is a very finished, quiet horse who enjoys working and has plenty of show experience. We bought her from the person who owned/trained her from a weanling and she said even when she was being trained she was never a bucker. Oh, and they don’t jump, just show on the flat. I’m also thinking that my daughter may be cinching up too tight? Thoughts, suggestions on a different girth suitable for showing that won’t break the bank? I will still have the chiro out for an adjustment no matter what

Why don’t you try the leather girth at home and see if that’s the problem? Does her regular schooling girth have elastic at one end as well, or both? That could make a difference as well. I would suggest trying the show girth at home to rule it out first before you go crazy girth shopping

Try the leather girth during the lesson and the fuzzy one at a show. You’ll have your answer. Maybe the fuzzy one offers more freedom/less stiffness/especially in the elbow region than the straight leather one?

Is there a rule agains’t fuzzy girths? If not, then you could maybe buy a nicer one for shows.

[QUOTE=alibi_18;7095810]
Try the leather girth during the lesson and the fuzzy one at a show. You’ll have your answer. Maybe the fuzzy one offers more freedom/less stiffness/especially in the elbow region than the straight leather one?

Is there a rule agains’t fuzzy girths? If not, then you could maybe buy a nicer one for shows.[/QUOTE]

It absolutely could be the leather girth. I had one horse that would buck you off every time ridden if you used a leather girth. Never bucked with fleece girth.

if a girth is to tight, mine really resists reaching forward with her shoulder / elbow area, there is a muscle group there that can feel pinched by a too tight girth - I could see how girth discomfort could result in canter bucking

I don’t see how a child could over-tighten a girth. I don’t worry about over-tightening girths and neither do any of the women I ride with. The grooms, yes, and my trainer (a man) yes, they have the power to over-tighten girths, but us? I’m pretty strong, but no way.

I second the idea about using the leather girth at home to establish that it is, in fact, the problem and then using a fuzzy girth at shows. Maybe try one of the Equipe leather and sheepskin girth kits? The fleece comes off, so it is easy to clean.
(you’ll need to scroll down a ways to get to them)
http://www.premiertackoutlet.com/girths.htm

I agree with trying the leather girth at home.

Also, I assume you use a different saddle pad for showing than for schooling. If the pad isn’t the same thickness as what you use to school in, it’ll make the saddle fit differently which could be causing the bucking.

Thanks for the input everyone!

I don’t know that there is a rule against using fuzzy girths at shows, but I don’t think I’ve ever seen anyone do it. We do use a different pad at shows than at home, most of the time, but when we had the saddle professionally fitted she checked it with different pads and without a pad. So I don’t think that’s likely the problem.

My daughter does tend to cinch up as tight as it can go. Obviously she can’t do it as tight as a big man could, but I’m betting now that if I’d checked, we wouldn’t be able to slide a finger under the girth at her belly after she’s tightened it.

The fleece girth that she uses for schooling has elastic on both ends, the leather show girth only on one end.

I just remembered something else after I posted this yesterday (I’ve been wracking my brain for “clues” lol). When we initially bought the horse last spring, she was riding her all the time in a leather girth, and the horse started to get really cinchy. Then we switched to fleece for schooling and the cinchiness went away after afew weeks. Didn’t show for about a month, showed in leather girth, buck going around corner right after canter transition, just like the other night. BUT we know now that she also needed a chiro adjustment, and the saddle she was riding in at that time wasn’t a good fit, so there were definitely other things going on. The only thing that’s been a consistent when the bucking has happened is that girth though. The only time it hasn’t happened with that girth, cantering at a show, is at the county fair last year, after the adjustment/new saddle. However, I also realized that we didn’t put her saddle on that day, the trainer did, so that is making me think it’s possibly just over tightening. I feel like a horse Sherlock Holmes lol.

We will take the leather girth to her lesson this week, have our trainer check the tightness, and maybe have the trainer get on and canter first, take her around some corners. Our county fair is at the end of August, which is the “big” show for 4H kids. I may just say the heck with it and have her show in the fuzzy girth at the fair, no matter what.

Also, we have our saddles fitted every six months. They always need a bit of reflocking. Also try a gel pad under saddle. There are lovely, washable fuzzy girth covers. Is the pony really bucking or just trying to swap leads behind?

[QUOTE=Appsolute;7095861]
if a girth is to tight, mine really resists reaching forward with her shoulder / elbow area, there is a muscle group there that can feel pinched by a too tight girth - I could see how girth discomfort could result in canter bucking[/QUOTE]

Before the show, they were cantering just fine while practicing, but only going back and forth on a long straightaway out in the grass (no practice arena). So no corners to go around. The bucking only happens right after the first corner after the transition to canter (and she did it both directions). It’s not a big buck that involves the hind end, it’s more a “hunch” that seems focused in the shoulder area

[QUOTE=Wheel Whip;7096477]
Also, we have our saddles fitted every six months. They always need a bit of reflocking. Also try a gel pad under saddle. There are lovely, washable fuzzy girth covers. Is the pony really bucking or just trying to swap leads behind?[/QUOTE]

Our horse chiro/therapist is also a saddle fitter, so I will have her check again when she comes out. She transitions into the canter fine, then they go around the first corner, mare’s head goes way down, she hunches up her shoulders, then she keeps cantering. It’s never happened at a lesson, or at home, or when they practice cantering in that show arena (the 4H clubs get to practice there once a week during the summer) with a different girth

Lots of top barns use synthetic fuzzy girths at shows. It has to do with what the horse goes best in. Buy a second fuzzy girth for shows. Check out the pictures of Tori Colvin. Many of the horses she rides go in fuzzy girths. 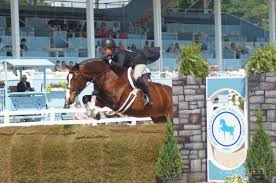 Lots of top barns use synthetic fuzzy girths at shows. It has to do with what the horse goes best in. Buy a second fuzzy girth for shows. Check out the pictures of Tori Colvin. Many of the horses she rides go in fuzzy girths.

That’s good to know, thank you!!! Even if it’s not the girth that is the main source of this problem, the horse clearly prefers the fuzzy over the leather. When we bring out the leather girth she kind of “makes faces” and will move around when we even go to attach it to her saddle. Doesn’t do that with the fuzzy

If the horse has that definite a preference, why make her uncomfortable? As PonyPenny mentioned, lots of people show in the synthetic fuzzy girths these days. Get a nice new one and keep it for shows.

It could be something as simple as pinched hairs with the leather girth. anyway, if she likes fuzzy, go fuzzy!

^ What the others said about if the horse likes fuzzy, go fuzzy! Another alternative is trying an equalizer girth. My horse likes that even better than a fuzzy. I never completely liked fuzzy girths because I feel like either you can’t get them tight enough, or they were too tight. The equalizer girth seems to give the leather look and gets that “perfect” tightness. Doesn’t seem to be a problem in the hunters either as some may argue; I won a decent sized class at a AA show using one.

Like what others have said, if the horse prefers the fuzzy, synthetic girth use one at shows too.

My mare hates leather girths. She won’t go so far as to buck you off, but she won’t move out and makes evil angry mare faces if you ride her in one. So I show in a fuzzy girth (rated & local shows). I have a nice one that I keep just for shows so it stays pretty and white.

That’s the exact one I have!