Growth plate fracture (tibial tuberosity avulsion fracture) in Whippet puppy - anyone have experience with this? 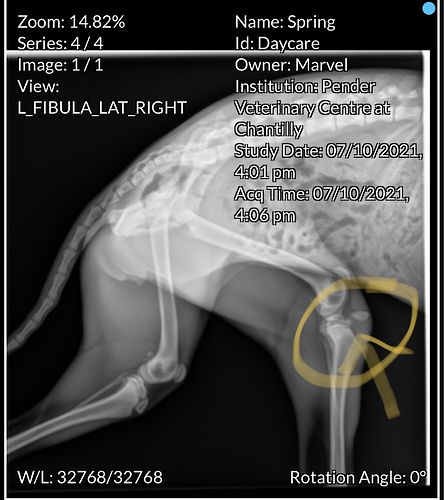 image750×843 136 KB
NOT my Whippet puppy, this one belongs to a neighbor and is 4 1/2 months old (this puppy and my 9 month old Whippet do playdates and pack walks - they love each other! Obviously this will have to be suspended for the foreseeable future

) She recently finished puppy classes with me and they were planning to do my Intermediate class at the end of October, but that will have to wait too.

This puppy (Spring) was in a doggy day care situation at a veterinary facility; she plays (supervised) with other puppies in a play room for a couple of hours, then is put in a room by herself for awhile - which is where it happened.

The “resting room” has walls halfway up then windows above, and one dog cot with a blanket. Apparently they put Spring in there, then noticed she was limping about 10 minutes later; the owner was unable to get any more information out of them about what might have happened - though there are cameras in the rooms that stream to the main computer, they don’t record or playback - and no one was watching.

The owner’s response to this was Hmmm.

Spring is in surgery as we speak. This happened last Thursday, and she has been resting and on pain meds and anti-inflammatories in the interim - there was apparently a lot of bruising on her inner thigh and she has been in a good bit of pain. Though she will obviously heal (and this is not that uncommon in puppies), it is clearly traumatizing for everyone involved - including the owner’s 11 year old daughter. The owner is racking her brain trying to figure out what happened - how much of an impact would it take to cause this injury? Would twisting the knee do it? A fall? Whippet puppies are CRAZY athletic, they run, jump, leap and twist, turn/spin on a dime, explode from a standstill and “levitate” onto furniture - so it’s actually surprising that this doesn’t happen more often! (and I’ve seen Spring and my puppy Te’a contort themselves and wrestle and chase and race and jump over each other and body check and knock each other over and playfight with such vigor that you think SURELY they will injure themselves!, but they seem to be made of rubber, and always come back for more.)

I am wondering (as is the owner) whether they picked Spring up, she tried to wriggle free, and got dropped - twisting the leg somehow? The room is about the size of a box stall, so it’s not like she could get up a big head of steam, and it’s hard to imagine that she got the leg caught on the simple, lightweight cot. Thoughts on this from those of you who have had similar experiences would be greatly appreciated!

There is a saying about Whippet puppies: “it’s like having a live squirrel in the house” - very true IME!, so recovery (and forced rest) will be extra challenging. Brain games will help, but it will still be rough on puppy and owner.

TIA for any input!

strictly a guess, but I’d say the puppy probably got hurt in rough play with other puppies.
When I first started taking my young dog to the dog park, she and the other dogs played so so rough, it scared me. Doesn’t even take a body slam, could just have been a quick spin.
I’d say it’s less likely to have hurt itself in the resting room.

Well, the puppy was perfectly fine when she was put in the room - or so they said. She walked in with an attendant, then they noticed the lameness 10 minutes later.

She was “non-weight bearing”, so it seems unlikely that she was totally fine when put into the resting room (unless they are hiding something!) and then 10 minutes later in that much pain.

The playroom has cameras and presumably recordings…

Well the daycare or the responsible employee doesn’t want to admit they weren’t watching closely so they just blame it on the dog injuring itself.
Wonder what size dogs were in the play group. Bigger, huskier dogs? Whippets look to be quite fragile so a sturdier puppy breed might have injured the whippet.
I know of many dogs who’ve been banned from daycares because they’re just too rough and don’t fit in.
My current GSD at 5ish is still way too rough playing with other dogs, even those bigger than her. She would be a nightmare at a daycare.
Put a bunch of young frisky dogs in a large playroom and it’s a free-for-all.
Usually daycares keep an employee in the playroom at all times to prevent bullying and too rough play.

I think that’s what the owner is concerned about; how “forthcoming” they are being?

Puppy is in with a few same age puppies (4 in the room at a time), they are all “on camera” constantly so the owner has watched through the day. The other puppies are a bulldog, a Frenchie, and a toy breed (maybe a Shih-Tzu?), all of them are actually pretty sedate, and spend most of their time climbing onto and off of the little walkway, nosing the balls around, there is never any rough play shown (kind of unusual, actually), but they are carefully supervised.

The ONLY “non tough” thing about Whippets is their skin

They look fragile but are SERIOUS BUSINESS, and very tough, athletic dogs - which of course belies their appearance as “living sculpture” and their gentle dispositions. They ARE incredibly fast, which can result in orthopedic injuries when they get a head of steam up and try to stop or turn too quickly, but the puppies in this group don’t actually run around in the playroom.

Whippets play rougher with each other than they do with other breeds; I’ve seen this numerous times (Spring plays rough only with my Whippet puppy!) That’s not to say that a larger, more aggressive dog couldn’t have hurt her - but there are none in her playgroup - she’s fairly petite, but the other puppies are no bigger than she is.