So Western brethren – I keep hearing how Hancock horses are “tough.” Can anyone describe “tough” in more detail? Or provide examples?

I’m a longtime Hunter/Jumper girl, have ridden many many many OTTBs, and warmbloods. Tough OTTBs tend to be “tough” in very different ways from a tough warmblood (although that distinction seems to be diminishing w/more TB blood). I think I’ve finally got that down. I’m now moving (at least part-time) into the Western World. Besides the roan exterior – how scary are Hancocks? What should I know?? Any words of wisdom appreciated – as well as great stories!!

Sticky footed
Buckers, not light up front
Stubborn, can get stuck if mentally blocked in
Once they get it they have it
Don’t hold grudges, but don’t offer excuses
Solid, tough, stout horses

Time has diluted much of the above unless linebred.

There is a Facebook page for Hancock and Blue Valentines. Lots of breed specific info there. I have a Hancock. I can only speak to his personality. He is stoic. He is Not affectionate. He prefers other horses to humans. But he is hardworking, tough, and once he learns something never forgets. BEWARE of heavy line breeding. There are some genetic issues that come up with that.

This. All of this. I wouldn’t buy one expecting to do western dressage or anything that require a soft and light horse. But if you’re trying to ride across the wilderness for 2 weeks, they’re hardy enough for that if you don’t become separated from them.

If all you need is a rock pounder, fine.
They are too slow footed and heavy for anything I want to do. I’m not a fan and I’ve rode a pile of them, several that other people ruined which is bad enough on it’s own but being a Hancock makes it worse.

It seems on FB, at some point someone will post the meme or say, " You don’t like Hancocks because you’re not cowboy enough to ride them". eyeroll

If the only thing attracting you to Hancocks are the roan factor….take a look at something Peptoboonsmal bred, preferably with Smart Little Lena on the bottom side, you’ll be extremely happy with the looks and the brain.
If someone is trying to talk you into a Hancock, you don’t need that kind of negativity in your life.

just kidding, kind of.
But on a serious note, they’re an acquired taste (and most of us don’t need something quite that gritty) and probably not the bloodlines I would recommend for someone wanting to get into a new disciple which I assume is possibly the case since you mention riding TB’s and WB’s.

Trying to think of a polite way to ask this, but here goes… Is it my perception or are Hancocks less refined physically than many other bloodlines?

I have cowbred horses, going back mostly to Doc Olena, and they are balanced, athletic and have stayed sound long term.

I do like a lot of bone and foot on a horse, which the Hancocks I have seen appear to have, but the Hancocks also seem “clunkier”. Is it me?

Ugh. Didn’t mean to have a withdrawn post (that sounds so sinister). I like roans well enough as a color (didn’t mean to imply that was a “draw”) but I was much more interested in “why” and “how” these horses are considered to be tough. Thank you everyone for your input!!

And I don’t have a particular individual animal in mind, just trying to learn

I do like a lot of bone and foot on a horse, which the Hancocks I have seen appear to have, but the Hancocks also seem “clunkier”. Is it me?

The stallion Joe Hancock was out of a Percheron mare, so depending on how line bred the individual is there could still be quite a bit of draft influence.

My mother had a Hancock gelding in the late 80s. Really lovely horse and very athletic. But he was a die-hard bolter - the last straw was when he bolted into my pony and I, knocking us both down as he headed for the hills. Mom sold him with full disclosure to a foxhunter. I have no idea how he worked out as a field hunter but I think he would have made a very good one, if the new owner managed to get his behavior straightened out.

I would test for PSSM. Some of the traits people describe make me wonder if that bloodline is affected. I have not heard good things about that bloodline, but have no personal experience with it.

I was just reading something, about Hancock horses often having kissing spine. Which could be why they are prone to bucking? It was an interesting read.

My Appaloosa was out of Hancock’s Dixie. He was definitely tough! I wish I had known then what I know now.

Unfortunately his conformation included short, straight pasterns and he just would not stay sound. 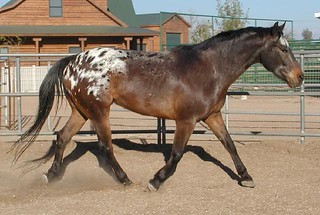 https://www.allbreedpedigree.com/scoops+blu+hancock+s
Sending this linebred Hancock filly to trainers today. Trainer says Hancock’s are all day working ranch horses who need a job, not prone to volunteer for pleasure rides.

https://www.allbreedpedigree.com/azul+caballo+amigo
Eye candy like this is why everybody wants one. Our filly was registered blue roan, but is actually smokey black, corrected color when we transfered registration papers. This filly is not easy about anything, she definitely needs a ranch job.

@Rhinelanders, we need pictures of your filly!

I am enjoying the info in this thread!

The stallion Joe Hancock was out of a Percheron mare, so depending on how line bred the individual is there could still be quite a bit of draft influence.

Joe Hancock’s dam was by a Percheron

I have a foundation Hancock mare. Before me, she was trained in dressage and competed in reining. I bought her for search and rescue. Since, she has done mounted shooting, obstacle challenges, herding, even polo. And she has carried me around the mountains without a spook and without quitting. Not for the show ring, but if you need a horse for all day and go anywhere, this kind of tough might be what you are looking for.

You’ve got some excellent responses as far as the general reputation of the Hancocks.

I want to contribute a few things that might be useful. As far as some of his reputation - Joe Hancock was used by Burnett Ranches (which operated the modern day Four Sixes) to improve their mares – and those mares contributed things like the roan and the big heads and probably the bucking as well. He himself wasn’t roan, but some of his best sons were, ie Red Man and his son Blue Valentine for example. So what got contributed depends on what line of Hancock you have.

The other thing to keep in mind is we’re talking about a stallion who was foaled in 1923 (nearly 100 years ago!!!) So it’s important to keep that in mind, that we are so many generations removed that we have to keep the individual and his or her close bloodlines at more of top-of-mind when evaluating his or her potential, versus just legend.

I actually know several linebred Hancocks doing very well in dressage/western dressage – one has gone to PSG. It’s all about the actual horse in front of us.

My new horse, for example, has the word “Hancock” in his name – but he’s 8 generations removed from Joe Hancock (so I don’t know why they chose to name him that). But when I introduce him to people, they all take half a step back. It is fascinating to me, how strong the reputation is. And, I suppose, he steers toward the tough minded side of the spectrum, and he is big and solid and has bone for days, so maybe he was properly named.

I sure hope he lives up to the rest of that reputation for being hard working and sound. He’s also destined for the dressage ring, the prettiest mover you’d want to see in a stock horse.