I just wanted to share. My 2 year old has been saddled, long lined, all that good stuff. But I haven’t harnessed him until today (mostly thinking my harness wouldn’t fit him yet). I do have goals to show him eventually in Carriage driving, which means I need to actually think about looking for a carriage.

My main concern was the crupper. A couple of times the long line has crept up and he wasn’t too happy about it. I had a friend suggest a towel rolled up to start with, so I did that today while he was being brushed and he didn’t care. Put the harness on, leaving the crupper undone. And we used the blind bridle as well. He accepted all of it with barely a blink. So, crupper. He hopped a few times and then was done. And I swear, I don’t think he’s nearly as downhill as he looks in the pic.

I don’t plan to hitch him for another couple of years, but lots we can do between now and then. 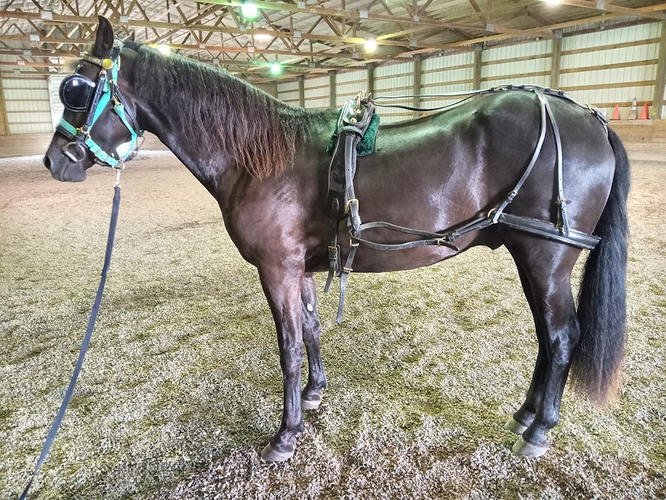 You will probably want to run the outside long line from bit thru the tug loop, then around his rump. This should help prevent getting the line up under his tail. Sensitive place!! And OF COURSE they clamp tail down on the line so it won’t come loose! Ha ha Running the outside line this way gives you control of his rump, you are not pulling his head in, rump flinging out, as is common with one-line lunging or if lines are above his back thru the rein terrets. Have a light whip with lash long enough to reach him, should he need a touch to be following commands. Nothing much more useless than a lunge whip that is too short! You of course are doing large walking circles inside his BIG circles. Big circles (50-60ft) are easier on his young legs, let him extend gaits to learn differences as you ask for them. At this point TOTALLY IGNORE head position. Really hard, but he needs to learn self-carriage, that desired head position is the most COMFORTABLE, by himself. We just try not to look ahead of the shoulder, not see head between his ankles or star gazing, while horse works it out. It is hard not “fixing”, but as long as horse is doing requested command, at speed we want, he is doing FINE! Ha ha

I would probably raise the breeching a hole or two, kind of sagging low on him. But in training he learns things may not be perfect all the time, so just deal with it. Alternate the blinker bridle with an open bridle so he sees everything during training. The blinkers are to help him focus in work, not be reading your body language, GUESSING to help on the next requests. He needs to wait for commands, respond THEN, not ahead or ignoring them. Not seeing or reacting to other things around him if he can’t see them.

Make sure he is used to light whip touches, flicking him. Those are your “legs” for moving sideways, getting bending on circles as you progress to ground driving, carrige work. Whip needs to be light, probably long, to prevent strain on your wrist. Cheap driving whips work best for us. $25 range, to not kill your budget.

Your lines should still be run along his sides for any ground driving, which keeps him “between the lines” for MUCH better body control, no twirling. Lines run thru rein terrets up along the spine, give you no body control. So spinning under the lines can cause loss of control FAST. We walk to one side while ground driving so we can see his head and body. You can’t see rein pressure or if he gives to bit for his rein release reward, from a position behind him. Cannot tell if YOU are not moving fast enough to not be hanging on his mouth. Not much feel on those long lines, so you need to be able to see things , his body side, by being off to the side.

If you progress to dragging things, keep them light. He has to learn to be brave moving things, not discouraged with heavy loads. He needs to be successful to be confident, not think he is anchored down! Totally fair to help him move his first little load forward in getting it started, by leading him!! We start with a smaller tire, which has steady resistance to dragging but not heavy, does not hang up on things with the round shape. Logs, posts will both roll outward and jump if flat end snags on grass clumps, then pulls free .

You may want to warm the crupper with your hands the first few times, make it easier for him to accept calmly. Be sure the skin under tailbone and around his dock area is very clean. Also that crupper itself is clean, no greasy dirt or manure flecks on it. That area will sore up, rub a hole in his skin with dirt, really fast.

A trick for the crupper is to wrap with cotton and vet wrap to make it softer and thicker plus keeps them from clamping until they get used to a line under the tail.

Make sure to practice getting a line under the tail and getting it out until it’s no big deal.

I’ve seen a few accidents from that happening.

Every time you post I have this urge to print your comments out so I can refer to them later!! You are a true wealth of knowledge! I love your posts

Your crupper looks a little loose, I’d take up a hole. In addition to what Luvmyhackney suggested, just leave the harness (or just a simple surcingle & crupper) on him tied in the stall. You don’t have to have a bridle on him. Our horses are accustomed to standing in harness, with or without a bridle. Horses learn to stand by standing; they learn to wear a bridle or harness by wearing it.