My horse was recently diagnosed with asthma and vet recommends soaking or steaming hay. Less than a week in, soaking is getting old, fast. I hate wasiting so much water and it gets SO HEAVY in the process, difficult to then move and toss it to his hay feeder.

They Haygain steamers have rave reviews but are $$$$. I’ve seen some people post videos of making their own hay feeders with wallpaper steamers and coolers or some other plastic tub or barrel. I am not super handy, but beyond whether or not I’m capable of building one, are the DIY ones really as effective as buying a ready-made one? I worry about mold/mildew, or something not working right and causing a fire or something, or it just not getting the job done as well.

So thoughts? Shell out the cash for a pro built one or save some green and make one myself?

We have the haygain half bail and it works great. It takes about 45 mins to steam a half bail. Horses love it.

If your horse is at home and you have time to babysit your DIY contraption, then building one will be WAY cheaper. There is nothing too complicated going on. It’s just a box and some way to create and distribute the steam, usually pipe with holes drilled in it, and as you mentioned, the wallpaper steamer.

Obviously anything involving the combination of water and electricity needs to be treated with care, and wallpaper steamers are not really meant for outdoor use. You’ll probably want to buy two of them so you’re not in a bind when first one stops working!

If you need it to Just Work and can’t spend much time fiddling with it, then buying the commercial one may be a better option.

Highly recommend the HayGain steamer. Pricey, yes but well worth it.

I’m one of those nervous nellies when it comes to any type of appliance so DIY was a definite no (for me). I know many others do the DIY approach successfully.

It’s helped my older horse with breathing issues immensely. And my youngster who wouldn’t eat much hay before has decided that he also must have steamed hay so now he’s snarfing down the steamed stuff.

The Haygains are expensive, but super easy to use and their customer service has been really helpful. If you were going to build your own, I’d be sure to go with a well-made, heavy duty steamer. The steamers in the Haygain are actually made by Jiffy steamer. When I was having some issues with mine, they told me it would be $275 to replace just the steamer, so a high quality steamer is not an insignificant chunk of the cost.

I bought the HG One in February because my horse was coughing. Even though it’s small you can still get 16 pounds of hay in it. I wish I went with the half bale model but usually end up steaming every other day because he’s also getting cubes with meals. IMO it’s worth the money.

You probably won’t be able to make a DIY one that gets up to the temperature of the haygain one and penetrates into the centre of the hay to get it up to temp too. The temperature is important to kill off the pathogens and moulds. A DIY one will perhaps heat up the outside of the hay but I haven’t seen one yet that would do it as well as a haygain does it.

I bought one and tested it out on a raggy old dusty bale of hay that was starting to go mouldy and I was about to throw it in the bin. I just wanted proof that the steamer worked but it worked so well that I ended up burying my face in it and took a big whiff. No little sting in the back of my throat that I usually get from just handling dusty hay and I ended up feeding it (and the rest of the bales) out instead of throwing it out, horse loved it.

PVC piping is not safe for boiling water and nor are those plastic tubs that most people use in their DIY versions. Putting boiling water in plastics leeches out chemicals and turning it into steam is not so great for you to go breathing in. You won’t regret buying a haygain and as a bonus, the smell that lingers in the air afterwards is amazing.

Edited to add: It was grass hay that I used in the steamer. I don’t think I ever tried alfalfa, I’m not sure if the leaf is too delicate to not get destroyed during the process or not.

2.1. If I needed a steamer, I would build my own. The Hay Gain is nice but not in many folks budget.

2.1.1. A lady on another forum built a great one for under $100. She already had a humidifier stored in the basement from when her children were babies.

Yes you have to babysit it, but multitask and do other things in the 20 minutes you’re waiting for the hay:)

Best wishes with your horse:)

PVC piping is not safe for boiling water

This is a true statement.

(I have no comment about making your own steamer thing, just want to repeat this tid bit that was so nicely already posted.)

I use a DIY that is inferior but seems to be helping my horse. I bought the biggest cooler I could find, a haynet, and a kettle. I stuff it as soon as I get to the barn every day, pour 2 kettles of boiling water (sometimes 3 in the winter) and slam the lid and walk away until I’m ready to leave for the night. Then, I pull the drain plug, and when it’s done draining, I pull the net out and dump the contents into her hay feeder. It is HOT enough to have to be very careful to leave the lid up for a few minutes before grabbing the net.

The hay comes out smelling delicious, not soaked to death, and extremely palatable. I know it’s not perfect, it’s not a proper steamer, but it seems to help my horse a fair bit.

Thanks everyone for the feedback. We can swing the cost for a Haygain system, I just wanted to get some feedback on the DIY models before laying it out. Getting the inside of they hay steamed and getting it to temperature were definitely 2 questions I had if the DIY systems could compare with the pro-built ones. I think I might just invest in the Haygain, probably the half bale so I can just run it once per day (especially for the winter).

Ongoing costs of meds etc. are not insignificant for asthma, so if I need to invest more upfront for the best steamer that may help reduce ongoing med costs, I think it will work out in my favor in the end (and hopefully be better for my horse!).

I built one using a stanley and makes a rack out of a copper pipe to hold each flake of hay. The copper manifold was attached to the wallpaper steamer. It worked as a trial to see if it would help the horse (allergies), we were not sure where his allergens were coming from. Long-term ended up with a haygain.

I built my own steamer. I did not use pvc pipes, I used the ones rated for hot water but I cannot remember the type off the top of my head. I bought a higher grade wall paper steamer instead of a cheap one.

I made it so everything came a part for easy cleaning too. I think my total cost was around $175 for all of my supplies.

My dad had some composite deck boards so I used them to put the plastic pipes on to have them off the bottom of the tub it helped circulate the steam. Overall it worked great. 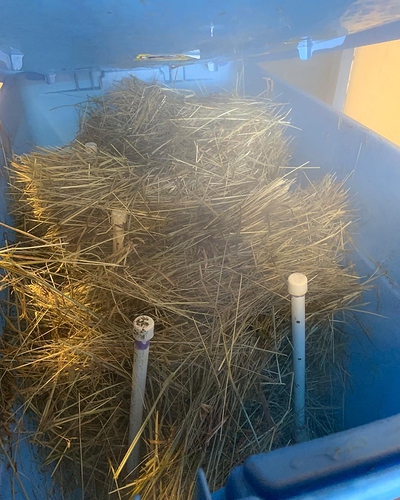 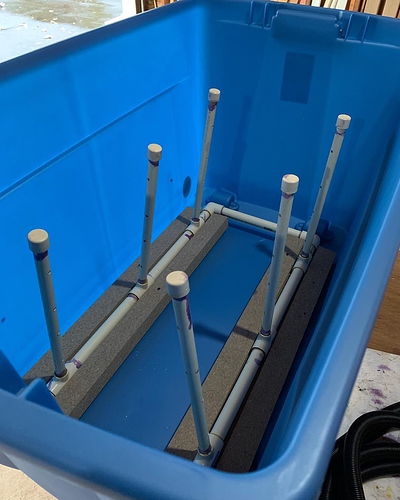 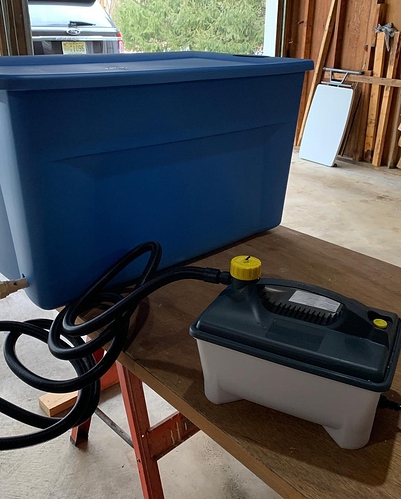