White variation of a white-tailed deer? Another variety of deer? Something else entirely? 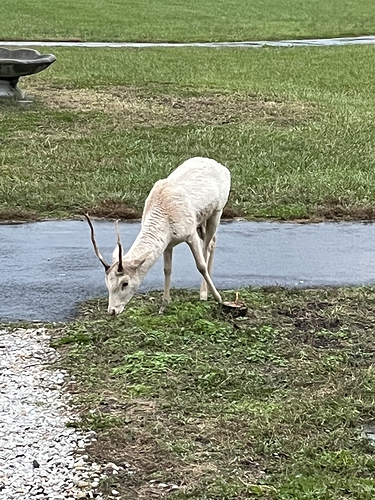 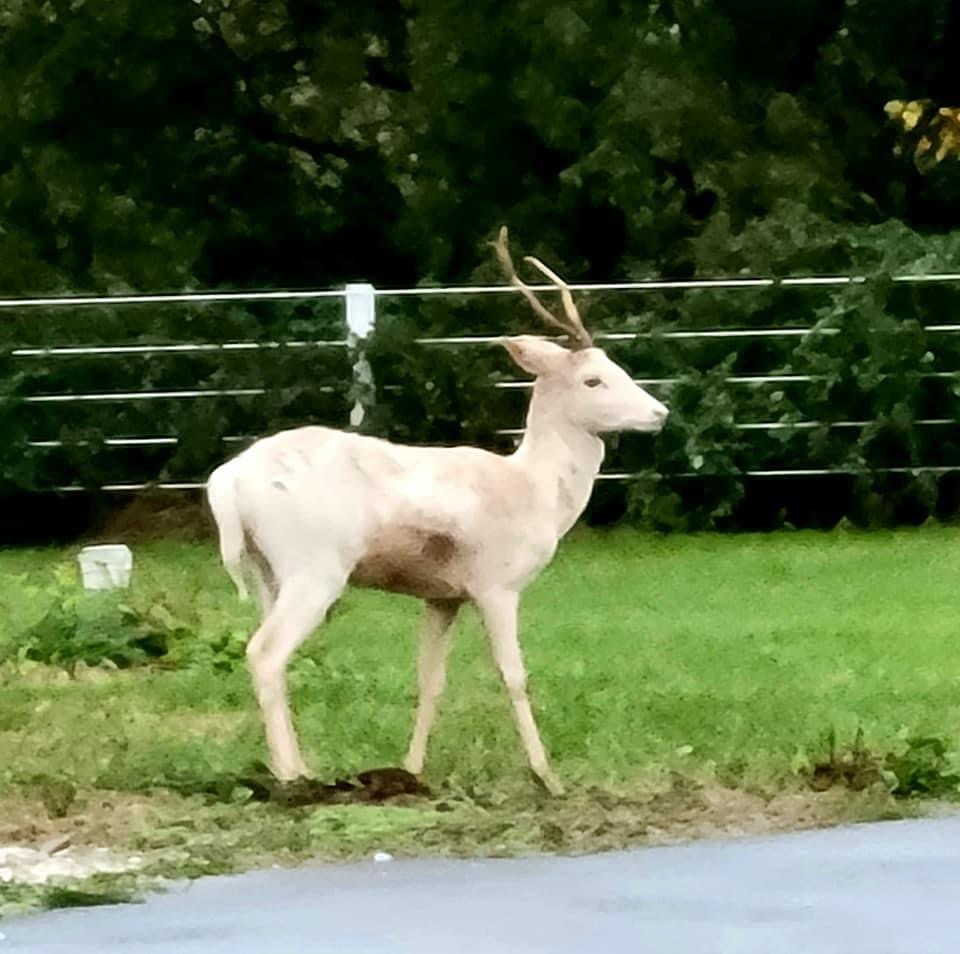 Looks like an escaped exotic deer. Do you have any game farms around?

Looks like an escaped exotic deer. Do you have any game farms around?

I agree he has an exotic look to him, but what kind?

There are all sorts of hunting lands nearby but I don’t know if any of them have exotics. When I have lived in other states, game lands with exotics had huge fences around them and I have never seen that here. There are a few backyard “zoos” and “rescues” in the county, but none particularly close to my knowledge.

FWIW he does not run like your typical white-tailed deer. He bounds like a gazelle or antelope, but poorly and uncoordinated.

He has been eating left over horse feed and grass for the past week but now he has decided to move up to the house.

Probably from one of those zoos. Those exotics have a huge range. We had an exotic show up at our deer feeder one year. I guess someone got him because we haven’t seen it since. But he doesn’t sound healthy.

FYI: I believe there is a species of endangered white antelopes. My internet is slow…google addax.

The first picture looked like an antelope to me, but the second one seems more deer-like

I would ask the local game warden / department of natural resources / whatever it’s called in your area.

A bit more playing around with Google Lens turned up the idea of a (Siberian) roe deer.

Searching for white or albino roe deer has me thinking maybe??? I don’t think he’s actually albino as he seems to have some pigment, but who knows.

The antlers aren’t right I don’t think. Do they twist?

I am reading they grow longish with minimal points, less than 4 (though Google images is showing all sorts of stuff which is probably inaccurate).

This guy has one point on one antler and they aren’t actually twisted, just oddly wavy.

Like this guy? Maybe a hybrid of something exotic and local.

Sort of but not really. They don’t have that texture or that thickness. They are like deer antlers, just long and wavy with a nub on one and an antler point on the other.

Whatever it is, I don’t think it’s native to the US. There are only two deer species native in the US, mule and white tail. I have never seen a white tailed deer look like that; it is not an elk/caribou either. I do not think it matches the body type of a pronhorn either.

Sometimes deer horns can be distorted because of nutritional defects or some sort of sickness. I’m really not sure what this is. The first picture did look antelope in type but the second is clearly deer, I think. The profile matches some fallow deer I see but the antlers look different. I’m invested now!

This is what an antelope looks close up, he is a local one.
A friend coming by took the picture on our road.
He would not let her by, led all the way.
That is standard antelope horn shape: 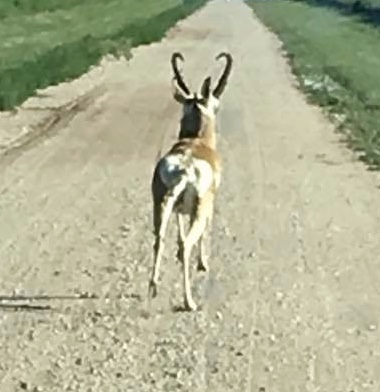 Whatever it is, I don’t think it’s native to the US. There are only two deer species native in the US, mule and white tail. I have never seen a white tailed deer look like that; it is not an elk/caribou either. I do not think it matches the body type of a pronhorn either.

Sometimes deer horns can be distorted because of nutritional defects or some sort of sickness. I’m really not sure what this is. The first picture did look antelope in type but the second is clearly deer, I think. The profile matches some fallow deer I see but the antlers look different. I’m invested now!

I was wondering if this guy is a regular white tailed showing distortion of antlers and body type due to genetics, illness, or malnutrition. But I don’t know how to confirm that. @wsmoak’s suggestion to contact someone would probably be the best way…

It’s very small for one for sure but there have been weirder things. There is a type of deer called ‘seneca white deer’ - they are white tailed deer that are white. Could it be that?

Antlers can distort for all kinds of reasons. Nutrition, sickness, even fungal diseases. I hope you see him again and get an answer… How cool is it to see a white deer though? It is good luck…

This might be a white tail with a color mutation and spike antlers (due to poor nutrition?)

There are some pics here that look similar on the antler front:

Once A Spike Always A Spike? - Sporting Classics Daily

Larry Weishuhn answers the question of "once a spike buck always a spike buck?" It boils down to age, nutrition and genetics.

The actual shape of the body & head look to be pretty white tail ish.

It looks like an unusual variant of whitetail - like a cremello/perlino version (if such a thing existed) that resulted in anemic antler formation.

Doesn’t look like any exotic I know of, which is certainly not an encyclopedic breadth of knowledge.

I have seen a white deer locally here in Western NY, there were a few females with fawns and 1 was almost pure white. Not sure if it was albino because I didn’t get a look at the eyes. Unfortunately they were gone before I could break out a camera. It could be just a local deer, but the antlers don’t look typical.

My guess would be color morphed whitetail. They aren’t common, but definitely “in” the genetics on the Eastern Shore (I’m a bit further south than you, @Texarkana). Have seen fully white and partial white ones for years. There is a breeding population of white deer in Seneca Falls, NY.

For what it’s worth, it doesn’t look like a fallow deer (a former BO actually had a few on the property I rented years ago). One escaped and went to live with a neighbor’s goats most of the time, despite a healthy population of local whitetails. Based on that bit of personal anecdata, I wouldn’t expect a hybrid, but that doesn’t mean anything in particular. (We do have a population of sika deer down on Assateague Island, but I’ve never heard of them getting onto the mainland.)

As far as the antlers, I’m guessing he’s just a weird spike buck - antlers can do all sorts of weird things (look up “non-typical antlers” for some interesting examples of that or “spike on one side buck” https://www.wildlifedepartment.com/ooj/understanding-“spike-one-side”-bucks - apparently skeletal injuries can impact antler growth; but on the oppositeside of the body!

). I saw this guy behaving really oddly last week near my place (it’s rutting season around here which kind of could, maybe, explain that), but he’s basically a big spike buck… 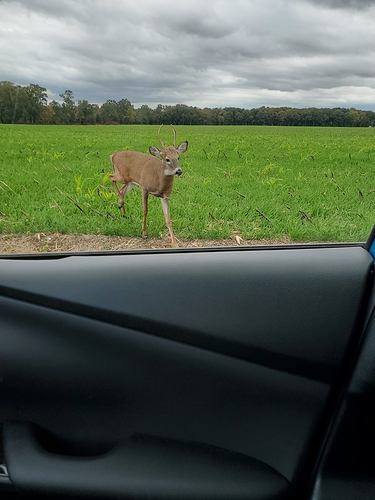 Biology is so cool!

I’ll send the picture to my brother, who is an avid hunter/sportsman, and had a pie-bald white-tailed doe on his farm for nearly 14 years (which is extremely old for any deer). Even though he hunts and allows friends to hunt, she was “protected” by them, although that wasn’t the only reason she lived so long. Just luck and maybe she was smart!

ETA - @Texarkana - I assume your user name is where you are located?

We’ve got a herd of pie-bald deer about 50 miles from me here in Michigan. Locals protect them and get FURIOUS when some down-stater comes in and shoots one. Evidently the DNR doesn’t really care. The antlers on this look more exotic to me as well.