HELP NARROW DOWN A STALLION FOR MY STATES PREMIUM OLD MARE!

they are still here via frozen!

I too really like Soprano’s blood lines. I don’t know much about what he throws himself however, but agree Contender is a fabulous line.[/QUOTE]

Many thanks to those who have recommended Soprano on this thread. In response to your question about what Soprano has produced, following are some of his offspring and their accomplishments.

Soul Power (By Soprano out of RT Fax xx – bred by Olde Country Farm) competed as a three-year old in May 2013 at the USEA Future Event Horse Show at Greystone Farm. Soul Power was 1st in his class and qualified for the East Coast Championships first time out! On June 2, 2013 he competed at Waredaca in the USEA Future Event Horse Class and was, again, first in his class.

Savannah (By Soprano out of Nicolette): In September 2012, Savannah was Champion Filly at the Danish Warmblood Inspection out of 10 fillies. She went to her first show as a yearling in April 2013 and was the overall champion at the CTDS Bluebonnet Breed Show with 82%. She currently has the highest scores in the USA.

Southern Belle (By Soprano out of Kibis): In September 2012, Belle, who was born late in the season and too young for the 2010 Danish Inspection, was presented at the September 2012 Danish Inspection as a two-year old and received her DH (Elite Mare) status with the following comments from the inspectors: “She is a very noble young mare with fabulous movement, who will be an incredible young horse when fully grown.” In April 2013, Belle was Champion Filly in the USDF Filly Qualifier Championship Class at the CTDS Bluebonnet Classic I Breed Show. Belle’s full sister, Something Special (both embryo transfers) was Champion Filly at the 2010 Danish Warmblood Inspection.

Electra NSN by Soprano (Soprano x Rhumba Ster/Idocus) Received two first places after only two months under saddle and first time out. She won all her classes and was also Reserve High Point Champion for that show series

Highlights of Soprano’s offspring in Europe include:

Grevens Sa Va (Soprano x Romancier): Selected to be part of Denmark’s five horse team competing in the Five-Year Old Division of the 2010 World Championships for Young Dressage Horses in Verden, Germany. Grevens Sa Va, was 5th overall receiving the highest score (86.2 percent) of all of the Danish horses competing in the Five-Year Old Division. She was also the highest scoring mare at the World Championships.

Chaigon (Soprano x Hertug): Out of 550 young dressage horses that competed in Sweden, 69 were selected for the 2008 Swedish Young Horse Championships. Chaigon was among those 69 and then one of 10 selected to compete in the Champions’ Finale, placing 9th under Minna Telde. Chaigon is currently competing very successfully in Europe at the Prix St. Georges level. He was tied for fourth place in the Seven-Year Old Final Prix St. Georges at the 2011 Swedish Young Horse Championships…less than four percentage points separated Chaigon from the first place horse.

SoPretty (Soprano/Cenzus): Reserve Champion and Best Warmblood Sporthorse at the 2011 Horse of the Year Show (HOYS) in Great Britain.

SheDaizy: Three-year old mare (Soprano/Rio Grande/Rollicking xx) out of Razzle Dazzle (bred by Olde Country Farm). At three years old, SheDaizy competed at the PVDA Ride for Life show last month and won at Training Level (her first recognized show) with 74%. She also won High Score in Ride For Life. SheDaizy has a very bright future ahead of her. Click on this link for video of SheDaizy competing at PVDA Ride For Life http://www.youtube.com/watch?v=mM7JKIZzQdY&sns=fb 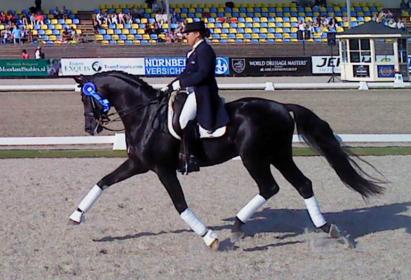 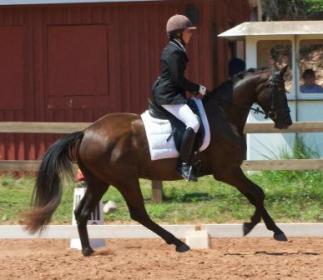 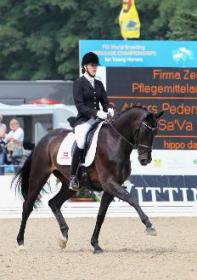 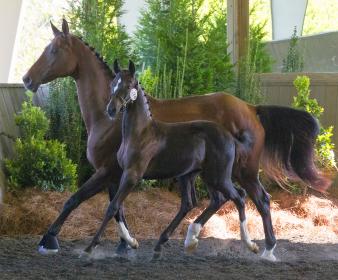 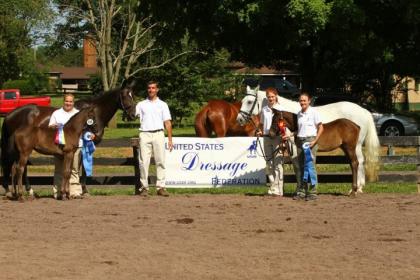 I have bred four Freestyles and all had a steeper hip then their dams. They also had more knee action and suspension then their dams and more expressive hind legs. Everyone of them had FABULOUS canters (but so did the mares)!

Will add Jennifer is wonderful to work with.