So yall may remember Kissin The Girls, the stallion Shirley Roth dug holes into with her spurs a million years ago?

He was owned for years by folks sorta local to me who are… colorful.

They sold him. But then things got weird. Really weird.

That is… weird. Really weird.

Oh cr*p. I’m curious, but afraid to look. Can someone give a sanitized summary? Did Roth get in trouble for spurring and leaving marks?

I went to John and Susan’s barn a few times to buy alfalfa last year, that’s my only interaction with them, ever.

The wife was a little odd/indifferent, but who cares. I have never met Mr. C.

I recognized the stallion’s name from the incident with the Roth woman years ago. He was fat and slick and looked well cared for in an immaculate barn.

It seems that Mr C may or may not have burned their house down, they may or may not be moving to Costa Rica, they maybe are rebuilding, but maybe selling out— its all of the bananas.

That’s the thing - even if you live out in the sticks there is always a good trainwreck right there on Facebook. Especially those people that cannot live without a lot of drama in their lives.

Such a train wreak on their Facebook, amazes me some things haven’t been deleted… 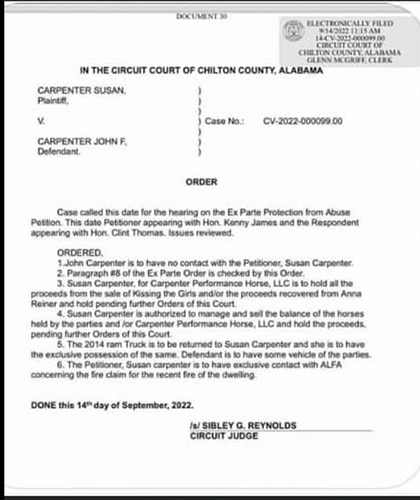 I’ve been following this dumpster fire of a trainwreck for a while now-- very entertaining to say the least. These people are whackadoos and how anyone can be supportive of them is beyond me. Apparently they cheat people out of money, and to go on a tirade and publicly bash AQHA trainers is like nailing your coffin shut. The audacity to bash trainers, while you send your own horses to Shirley Roth (who is banned from AQHA for abuse) takes balls.

From the start I was never a fan of this stallion…there was something so off putting about JC’s way of posting on FB touting how great the stud was, but Kissin The Girls (KTG) progeny never really amounted to anything. The horse has SO many babies out there and yet none of them are winning or doing anything impressive. I have heard they are tough minded jerks and they are hard to sell.

To me, a stallion owner doesn’t have to constantly convince the public how great a stallion is. A stallion’s progeny will do the talking for him. When I was looking for my next all around prospect in the spring, I couldn’t help but notice that the market is flooded with KTG babies. They were all lower priced and still couldn’t sell. Some were crooked, but a lot were small. Because I cannot stand JC and I just don’t like KTG as a sire, I passed on any that came my way.

I feel sorry for the girl that bought KTG, I had a feeling that there would be more controversy and conflict with the purchase of him. I especially feel for the breeders-- they have horses that they are going to have to sell for rock bottom prices to get them gone.

IMHO, KTG should just be gelded and allowed to live his life out in a pasture. The damage is done, how does a stallion’s reputation and name recover from an absolute shit-show situation? The whole Shirley Roth saga didn’t help KTG either. To keep breeding low end, bad minded horses is not what the industry needs anyways.

Have you seen that Premier Sires kicked the horse out of their program because of their shenanigans?

Agree! No one would have bred to this horse if he hadn’t come to notoriety due to Shirley’s actions. I was at Reichert that year and while I didn’t see the horse in person, Shirley tried to load him up during the main class she scratched him from before the owners would see him. It was a whole thing.

That’s the same year I also learned that Shirley used to shave the bellies of her horses to use that hair with glue on their sides to cover spur marks.

The owners at the time were from AUS and exported to horse for a couple of years. Carpenters purchased him and brought him to the states where he did…nothing.

That’s the same year I also learned that Shirley used to shave the bellies of her horses to use that hair with glue on their sides to cover spur marks.

That is going to some extreme measures to cover up one’s cruelty. What a sick person.

Yeah, I saw that and agree with their stance on kicking out KTG. These people are the cancer of the industry and I am glad someone is punishing them and holding them accountable for their actions of slandering other trainers.

What’s even more entertaining is when JC started spouting off about legal action against them. Good luck, dude. I don’t think he needs to worry about Premier Sires since it seems that no one will own a KTG offspring due to the drama and the fact that they seem to amount to nothing

That’s the only reason people seemed to breed to him. I’ll admit, I have watched the video of him jogging and loping in the pasture and I thought he looked beautiful. And I have seen the pictures of the abuse he suffered at the hands of Shirley Roth-- not pretty and no wonder his brain was fried after that.

They have bred this horse to everything and anything…he seems to produce a few nice yearlings, but then they disappear and never seem to make it to the show pen. I heard through the grapevine they don’t stay sound, and some have said he throws cripples. The breeders that rave about him all seem to show the 4H level with their KTG offspring. As a previous mare owner, I feel there are MUCH better stallions out there to breed to.

He’s a pretty horse in person, too. But his offspring haven’t done much, that’s for certain.