My 11 year old Hanoverian gelding came to his new home state sound with 15 mm sole depth and shod with a modified eggbar shoes on the hinds for a chronic right hind suspensory. His vet check two days before leaving old home state showed the chronic high suspensory had healed well with shockwave treatment, and he was put on a water treadmill for 6 weeks to strengthen his body and get ready for under saddle work The shoeing set-up was changed to four full-pours to protect the hooves from water damage and trailered shoes on the hinds.

Came to his new barn in new state in May. New farrier advised not to over-trim the horse during the summer rainy months, not to short shod, not to shoe tight, horse does not like to grow a lot of heel, and we must stay on top of the toe length. Sigh … he did all three and we lost the toes which were starting to get too long. The horse went lame in June, and we thought right hind suspensory again. Vet said lameness locator says left front bone spur on fetlock. Injected with Osphos, full pours on both fronts, 2 degree wedge, trim toes, set the shoe back. New farrier did the above, four hours later, the horse is standing in the field, he can’t walk. Called the vet and told him farrier said the horse could tolerate 5-6 mm sole depth with the pours (at which time we told the farrier “no, he can’t” but he had already done the trim and cut off the heels too.). So discouraged.

Vet comes back, lameness locator still says left front and pulls shoe and pour looking for an abscess. Radiographs show 5-6 mm sole depth. We soak, we pack, we are a wreck turning out on the thin soles, go through a couple of soggy hoof boots, keep him in. Finally, say put shoe back on along with the pour to farrier #2. Still limping on rt hind suspensory leg. Trimming 5 weeks later shows a bruise at the toe (never found an abscess, but it made sense there could be one) on and inside of the white line, and he is still limping on the right hind. Vet comes back and says it is still the left front. More radiographs to include the backs which now have lower heels and long toes. Said the suspensory leg is great, so keep bringing the toes back and no trotting, give Equioxx every day for 30 days. Last week was 30 days, horse was fine at walk under saddle. Time to reset the shoes. Horse is very bruised at the toes on both fronts at the white line and the frogs are bruised at the collateral grooves. Finally realized farrier #2 is trimming off everything that is growing. Feeling really lost.

Farrier #3 came last week and did the fronts. He was immediately better on the right hind in trot on the longe line. Where should we go from here? He is still nqr on that right hind, but much better. Thoughts? Giving him loading dose of Biotin 800 for the last 6 weeks.

What I see is that you moved your horse with a good, proven shoeing setup. Then two farriers talked like they were aware his issues and would help. But when they shod him they did the opposite things that your horse needed, EVEN AFTER you told them what worked for him. Not your opinion, but objective data!

Then farrier no. 3 shod him correctly on his fronts, and he improved dramatically. Very good!

My advise is to have farrier 3 shoe his rear hooves, and then evaluate him for lameness, and treat if necessary…

When everything has been working and his configuration has been changed (and nothing else has happened), RETURN to the last known GOOD configuration and reevaluate him. Of course if the configuration change includes something like shaving his sole depth to some insanely thin amount, it will take time for him to completely recover.

I wish you and your horse well! Please keep us advised on how things go.

I was in a somewhat similar situation this summer. Horse had a stone bruise that cleared up after soaking it for a few days. He was due for shoes a week later. I told my farrier, he said his feet looked fine but trimmed off WAY too much. Horse was LAME right after being shod. We were in a bit of a drought and the ground was very hard. I had a second farrier take a look at him a week later and he agreed the fronts were waaaay too short, he put on hinds to add more support. He didn’t want to touch the fronts until they grew out more. The next shoeing cycle he did all 4 and made sure not to take too much off the fronts and the initial soreness in the front feet was gone.

However he started slipping in his stifle, and wasn’t moving normally with hind right lameness. The vet came out said it was stifle/hock with muscle soreness. We gave him time to grow his feet out, bute for a week to reduce inflammation and estrone for a few weeks while slowly getting him back into work. He had a re-check 3 weeks after and is sound and doing great.

I would suspect your hind right is compensating soreness from the hoof issues. It sounds like this new farrier has made progress but he might need one or two cycles of growing out hoof to be totally normal. Check with your vet for some supporting relief from the compensating pain. Get a rehab plan to bring him back slowly and see how he does. It took about 2 1/2 to 3 weeks for it to click and him to finally feel like his old self. He needed to build back up the muscle in his hindend.

Negative plantar angle on both hinds, RH is worse, it’s actually negative while the LH looks “just” flat. It took months and months to get there. It takes time for the heel drop to happen, and longer for the toe face to bullnose to this degree.

Beyond that, there are different protocols for fixing this, and a lot involves the health of the back of the foot, the health of the suspensories, and other things. I have found the Hoof Care for Performance Horses group on FB to be really invaluable for these things

Farrier 3 may be able to take off some toe behind. Maybe go back to the eggbar for a bit while all 4 trims get sorted?

I was wondering about this - compensating pain or stifle slipping, or tweeked suspensory. 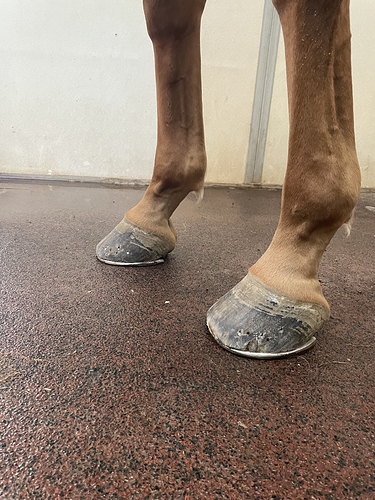 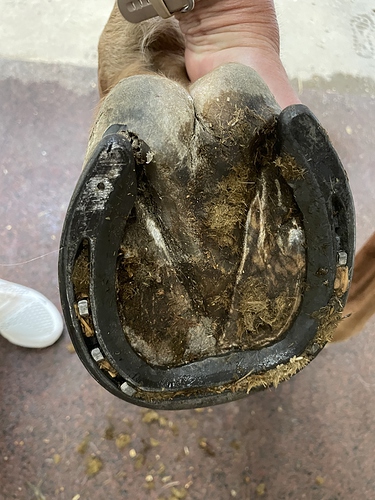 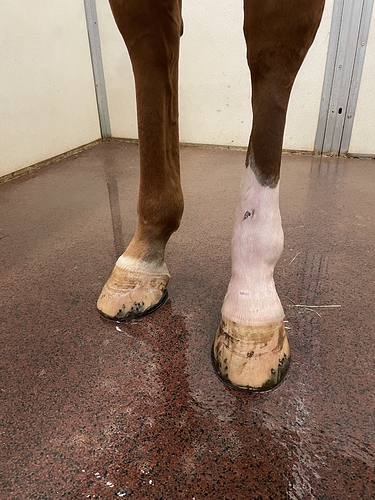 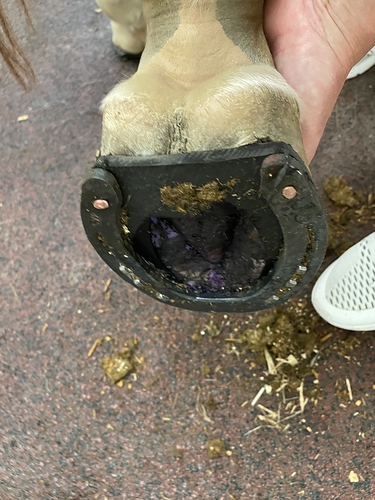 (To add insult to injury, he apparently got kicked in the pasture. The cut is healing well; swelling down considerably.)

I will post the farrier 3 pics. Going back to an eggbar would be my choice with some cushion, protection, and correct angle adjustment. To be reshod on backs sometime this week.

Astute observation … one hoof is rather flat and the other hoof on the hinds negative. Very interesting.