Hi All,
I am taking on a horse that has horrible front hooves. He develops thrush all the time, his frog grows weird and sometimes out the back of his hoof. He does have crooked legs too as an FYI.
He has had shoes on and shoes off. Currently is barefoot. Yeah as I write this I go WTF why am I doing this LOL I know they have used a lot of koppertox on him over the years and also has treated with the stuff with the gas and the bag on their hoof (that I can’t remember the name of right now).

He does have some allergy issues and is currently taking allergy shots.

I’m thinking take him off grains and just on a balancer with alfalfa. Getting rid of any excess sugars. He is a big horse and needs a lot of calories though…NOT an easy keeper.

I’ll try to get pictures ASAP for you all as soon as I get him to my house.

Looking for any ideas to help him get over this issue, he has been seen by a vet before but I don’t think anything aggressive was done with him.

Any ideas of things to try?

Based on my current crisis with a horse I took on with poor front feet, I’d recommend x rays sooner rather than later

I had my vet out today and talked to him about doing that. He is going to double check they didn’t do it yet, horse is currently seen by the same vet.

Depends entirely on what the feet look like. If you can get pictures of the soles of the foot, and pictures on a solid surface directly from the sides, that would help a great deal. Ideally the horse is standing evenly and square with the canon bone perpendicular to the ground. Picture as an example. It can be helpful to see at least from the knee down. 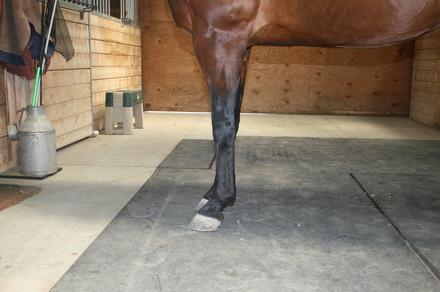 Get the camera perpendicular to the foot and quite close. I set the phone on the barn aisle. You can also do the same for the other views (front and rear). 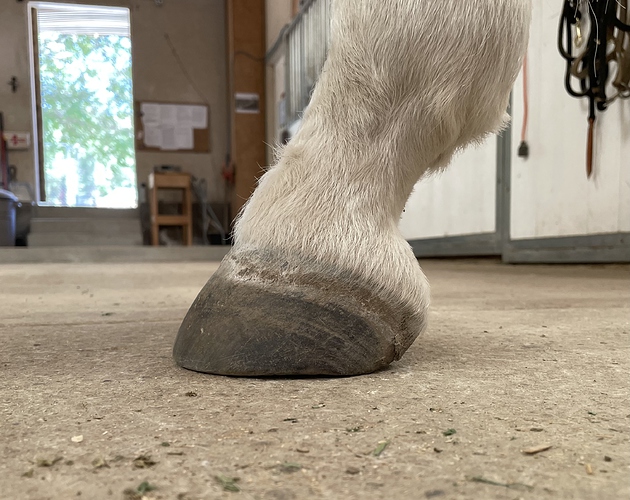 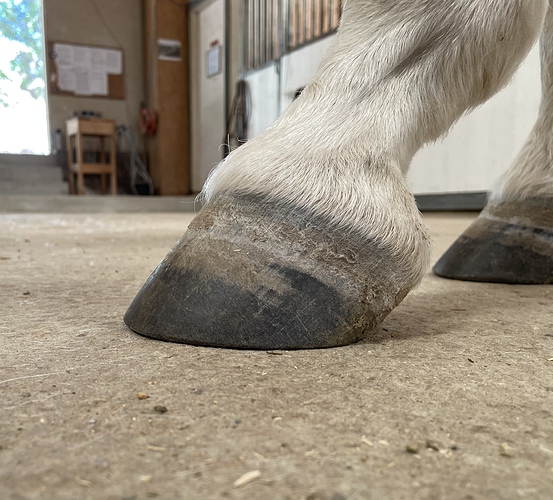 I’m thinking take him off grains and just on a balancer with alfalfa. Getting rid of any excess sugars.

This is a great idea. Maybe even consider beet pulp or timothy cubes instead of alfalfa as a carrier for a good supplement with an appropriate amount of copper/zinc.

I’m taking him to the vet today. Will share pictures when we get back! His Frog\heels look really bad

If you’re looking for something else to try for thrush, Tomorrow is a great product, it’s for cows (mastitis) and I get it at Tractor Supply. Sounds like you have other pieces to fit together on this puzzle though some of which may naturally result in less tendency to get thrush…

Seconding Tomorrow for thrush. My guy’s heels/frogs opened up before my eyes in a week. He was barefoot at the time so it was super easy, and I would do it again in a heartbeat if the need arose.

The vet says he has canker in both feet. Sigh. Not a great prognosis. We are trying a conservative treatment for now, the owner will need to decide what to do it that doesn’t work.

Ugghh, sorry to hear that. What treatment is currently on the books? Conservative treatment for bad canker doesn’t often work.

I’m curious, for my own data collecting process - does this horse have, or has he had, issues with sarcoids? I’ve seen references to a link between the 2, and so far, most horses I know of with canker, have also had sarcoid issues at one point, if not currently.

Hmmmmm, he has never been treated for a sarcoid…but that’s not saying he hasn’t had one or the problems he has on his legs are related to a sarcoid. He has weird lesions? or something that he gets occasionally…looses his hair and the skin starts coming off? It’s gross. The vet makes up a special spray to put on it. It’s been better since he went on allergy shots but he has scars on his legs from it.

The owner wants to find homes for all her horses, I was going to take this one in but after this diagnosis she may be stuck with him. I’m going to help out for now (she is paying the vet bills) and see if it gets at all better. She does not want to spend that much on him at this point.

Right now, he debrided? the frog\heel…it was bleeding a lot. He took out as much as he could of the infected area. He put copper sulfate on it and wrapped it up. I’m supposed to change the bandage EOD and apply more copper sulfate and sprinkle some metronidazole in it. He is also getting metronidazole 2x a day by mouth. He also said there was a vaccine that sometimes worked on it…it’s three doses. I can not remember what he said it was (but I can find out). He got one shot today, one in 7 days (when he gets a recheck) and one in 21 days after that.
If we don’t see any improvement in 30 days then the owner needs to decide what to do after that.

I feel bad but I also don’t need a horse that will need thousands of dollars of vet work to maybe fix it.

I’m happy to provide updates! I need to take some pictures when I change the bandage next.

Ok, that’s the typical non-surgical treatment. I guess I assumed something else when you said “conservative”

I’ve never heard of a vaccine but now I’m intrigued!

If that doesn’t work, it’s a hard decision between pts, and actual surgery to remove all that infected tissue, likely hospital plates to keep things clean, more medication, etc, and the potential for it to come back if it’s really deep-rooted.

The geek in me does want to see pics! If you have some Before pics, that would be awesome too. I think more people need to see what canker can look like and it’s really fairly different from thrush at some point.

Ohhhh. Canker is really bad ju ju. I would want to have a long talk with a vet that had successfully treated it to get an estimate of the time, cost and prognosis for a bad case. I do remember vaguely a number of years ago reading an article in Equus about successfully treating a bad case using some sort of immune drug. Maybe something used to treat pythiosis (sp???). It has been a long time and I can’t remember much. Maybe do some internet sleuthing and see what the new developments are before deciding if you want to take this on.

Oh Susan,
that is it! Pythiosis (though IDK if I spelled it right either)
We think he has had it for awhile and they were just treating it as thrush, it would get “better” then get “worse” again. Finally I said we are taking him to a good vet before I decide to take him.

I totally forgot to take pictures at the vet, but it was like his frog was bulging out of the back of his hooves and his frogs were all spongy. *-

You might be able to combine copper sulfate with some antibiotics and pack the hoof.

Wrap a diaper around that.

Change daily for the first couple days. Then see how it is healing.

I would post on the hoof care and rehabilitation facebook page. There are several people on there who have dealt with canker. For what it’s worth (and if you like the horse), I would probably attempt treatment. It looks like it can be cured. Although it this is already a severe case, you might be less successful. Probably worth trying.