Horse has been itching tail for over a year, and nothing will work

Hello! I have a horse that will not stop itching her tail for anything. I have tried so many different things that everyone has recommended, but nothing helps.

Here are some of the things I have tried:
-cleaning her teets with an unscented, natural baby wipe every day

Her tail is so bad that I just have given up. She has two huge hairless spots on her rump (one on each side lol) and her tail dock looks like a birds nest. She rubs her tail on anything she can find. (Trees, fence posts, the side of the stall.) We literally have skid marks on the stall walls from the skin oil and dirt build-up. I’m clueless and lost at this point.

Try A&D ointment or hydrocortisone on the bare spots.

If down to blood start applying 3 times a day. Working your way down.

I have never ever seen it burn a horse.

Some of the ones that they say put on and it works for weeks have burned horses on several horses over several forums.

My horse has a mild fly allergy and is very sensitive to insects such as gnats. He rubs his tail in the summer and also created a birdnest at the dock. Worming did nothing. He is very sensitive to gnats biting his navel and I use 1% hydrocortisone on that and his sheath. He will lift his leg and groom me when I scratch and apply it! Haha! I digress. That hydrocortisone cream didn’t work on the tail (but I wasn’t freakishly diligent with it). The only thing that seemed to work for the tail was an ointment I got through my vet. I can’t remember exactly what it is but I think it is a steroid. I can give you the details if you want. I rubbed it into the dock daily and I want to say that within days he stopped “but planting” on the fence. His tail is finally starting to grow back and looks a little sad.

Have you run a fecal?

Assuming the mare is worm-free, have you reached up really high between the nipples
and cleaned up there? A black waxy build up will drive a mare crazy.

Put her in the wash rack or get a bucket of warm water. You can use regular coat or tail shampoo but I use people shampoo for this task as it’s milder and won’t irritate the skin in this area. Have help around the first time you do this. Some mares love it, others will try and kick your head off.

Stick the hose high up between the teats and get the area real wet. Take a terry wash cloth or use your fingers and dig way up there. You may be shocked at the amount of wax. Wash between the back legs, too. Rinse well.

If a mare is in work and sweats frequently, this area gets extremely itchy with wax. My mare used to have to be cleaned several times a week.

It make take several weeks with this routine for the mare to quit. It becomes a habit and any sort of itch in the hind end results in tail rubbing.

Have the vet inspect her tail for insects, primarily lice. I’ve also heard that some people have stopped the itch with repeated rinsing the tail dock with Listerine.

Yes it stinks. Works though.

Flea shampoo to kill mites, then follow up with dandruff shampoo to keep the flakes down. Then Listerine sprayed daily, rubbed in thoroughly.
That said, I think some of this could get rather drying which would exacerbate the problem. So I wonder if soaking the tail in oil would help…?
Also, tea tree oil works good for itches too.
Hydrocortisone cream as others have said, but you may need a stronger strength than OTC so ask your vet.
Desitin maximum strength (40% zinc oxide) is also helpful.
Also, somewhere there is a thread about this where using wormer (ivermectin?) directly in the anus was used. disclaimer here PLEASE ask your vet or do some research on how to do that correctly! It does work. Fecals don’t show you the entire picture.

I found out about THIS recently

apparently mares can get “beans” the way geldings do and it can contribute to chronic tail rubbing. This article/video is really informative and helpful.

EDIT: Apparently the video is unavailable but you can find it HERE 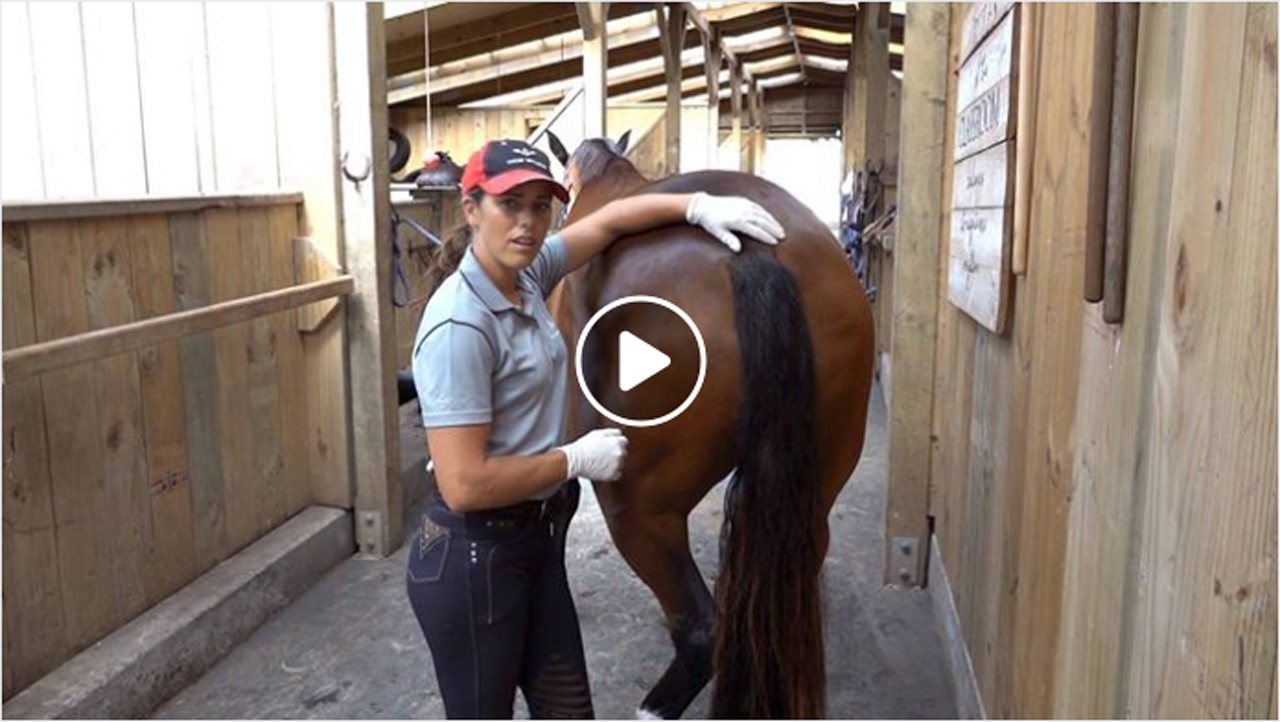 Mares, as well as geldings, can suffer from 'beans' composed of dust, dirt and smegma stuck in the folds of skin around their nether regions. It can be very uncomfortable for them, so it's important to keep them clean and healthy to avoid possible...

If she’s allergic to culicoides midges (ie it’s sweet itch) then an easy to find proven repellent for this is lemon eucalyptus (not lemon, not lemongrass, not eucalyptus) oil found in Repel and Cutter brand other brands of mosquito repellent for about $5

Applying that daily will fix that problem stat.

ETA I also adjusted the Iron : Copper : Zinc : Manganese ratio in the diet to get close to 4: 1: 4: 4 and saw a great reduction in itchiness in my horse

Too much iron throws that ratio out of whack, and Zn and Cu help with skin and coat issues. Excess iron is a very common problem the further west you go in the USA, and generally speaking (unless your horse has a specific need) you should avoid any supplement with iron in it if possible (Red Cell, red mineral blocks)

Minimum amounts of Zinc is 400mg/day, meaning copper needs to be at least 100mg.

If you can, maybe consider switching hay providers?

My pony spent the better part of a year rubbing his beautiful tail out, until it was raw and he had bald patches on his rump around his dock – shoutout to the kid who saw him at a show, pointed, and excitedly exclaimed 'Look at that pony mum! He has a monkey butt!!

We tried antihistamines, wormers, anti-fungals, anti-bacterial shampoos, and of course lots and lots of zinc to soothe the raw skin and protect from sunburn. Nothing worked, and the vets pretty much ran out of things to throw at him. When the winter came he stopped rubbing and (knock on wood) hasn’t rubbed his tail for the last 5+ years.

At the time we figured whatever was irritating him had died with the cold, but looking back at which boarding barn he was at at the time, I suspect bad/contaminated hay. When he stopped rubbing coincided fairly well with when the hay was switched from last year’s crop to that year’s crop, and the new hay was most likely from a different provider.

She might needs a steroid shot to stop the itching even if you clear the problem.

Hi, while you are trying the above suggestions, if you can add some omega 3s to her diet, like ground flaxseed(triple crown has a product) you may be able to keep the itching from returning once it is quieted.
Also, I have had luck with head and shoulders shampoo for an itchy tail dock. Good Luck, frustrating problem to deal with

Number one thing is have your vet out to check for a uterine infection. Sometimes there’s no outward signs.
If that comes back normal try:
Benadryl. I got the cheapest 600ct bottle on Amazon and give 10-15 a day. Works very well for allergy related causes. Also spray some anti-itch mosquito bite spray all over her itchy tail

Put ivermectin all over her itchy tail part and a little around her bum hole. Will kill any pinworms (oral dewormer sometimes won’t) leave overnight and then rinse the next day

Try a chiro appointment. Sometimes the base of their tail hurts when they are out of alignment very badly and they will itch it

Have her allergy tested. Sometimes food allergies show up as hair rubbing

I have a similar mare. Battled itchiness for years and it is all year, not just seasonal though it is worse in the summer. Finally had an allergy panel run on her and she is allergic to just about everything she is being fed. Just got the results in today and am working up a new feed plan for her. So worth the money now that I know what not to feed her. Hoping it helps a lot - though may still need to do allergy shots for the allergies that are not diet related.

For the last several years my gelding has been scratching his tail from spring through fall. I have also tried every topical and other treatments with the vet. I have had varying degrees of success with previous treatments but last year I had great success with putting cowboy magic on the top and the underside of his dock every few days. I see he has just started rubbing again so I will start up with that again soon.

I HAD NO IDEA!!! I don’t own a mare now but did years ago and of course knew to clean between her teets but this??? NO idea!!!

She has sore muscles in her hind end.

When I got my mare she rubbed her hind end raw for two straight years and I tried everything like all mentioned above. She also had a tight area of muscle in front of her SI area that I could feel but couldn’t get released.

That was finally accomplished by the great Vicki Wilson and she never.ever.rubbed again.

Does this horse have tight muscles in back or hamstrings etc?