Horse in need is almost 5yo colt. Equine equivalent of teenage boys. His impulse control has actually improved a ton the last year, so maybe next year things will be different?

He’s not aggressive to ME. Not biting the humans is deeply ingrained. But I have a mare I would like for him to live out with.

Yesterday I stuck a grazing muzzle on him and let them out together and there were a couple of squeals and a few kicks in his chest and then they settled down beautifully. About 30 minutes in I took off the muzzle and they did great all night! This morning they were ok, then he started bothering her. I put out a couple of flakes of alfalfa and alfalfa > ass thankfully so that settled him down. Unfortunately an hour later he was being a dick again so I had to separate them (while she screamed her objections).

They live across a fence from each other, and it’s been a love thing since they met at a boarding barn. They’re mine, and I don’t mind some bumps and bruises but I don’t want him hurting her. And she doesn’t seem like she’ll be the one to teach him manners. So if I could stop him from chewing on her and still be able to eat hay they could enjoy a more normal/healthy/social horse existence and I would like that!

Otherwise we can continue as we are in separate paddocks. I can give them a couple of hours at a time with the grazing muzzle. I would like a foal from them. She’s been a fancy little hunter and he would add some size and bone. I would also prefer he learn to be a nice breeder and not a bittey rapist. He’ll be learning to collect this spring but for everyday living I’d like him to have actual company. Our current setup is great. Life is good. But if I can make it better I will. I’ve avoided drug habits, children, and student loan debt, so having a big ass white stallion is my treat to myself!

Biting is part of the mating game for horses.

Also think about when you want a foal. Turn them out today, you get a foal next November. Depending on climate that could be a disaster. It also makes a horse young for his age in any breed registry that uses a Jan 1 date for official age.

You want a spring foal. Whenever that is in your area.

I absolutely understand that biting is part of breeding behavior, but chewing on her knees for an hour is not going to get anyone pregnant.

She’s not in heat, and it’s quite unlikely that she would have a true ovulatory cycle during the persephonic period. But, horses and nature don’t read the same books I do so I do watch for actual “productive” breeding behavior to show me I’m wrong! I was hoping to let him have some non sex socialization before the spring baby making season.

Cribbing muzzle, but I agree with Scribbler that this seems likely to result in a pregnancy sooner rather than later.

do watch for actual “productive” breeding behavior to show me I’m wrong!

So, if they’re turned out together & you witness this, how do you intend to separate them so conception can’t result?
Assuming you’d only put them together with you present.
Even then, I sureasheck would not want to be the one trying to dis-mount a 5yo stud from a mare

Equine conception rates are about 30% per cycle at peak mare fertility. Mare is 14 years old, so chances are even lower. That’s IF he can figure out how breeding works. We tried breeding in hand last summer and couldn’t stop laughing because of his repeated attempts to mount the wrong end.

With our mild climate and my really wanting this baby I’d take it in November no problem. There are not a ton of Irish Sporthorse youngstock showing opportunities available close by, so weird birth timing isn’t a concern. Not having my sweet mare chewed on is!

More specifically I agree that attempting coitus interruptus would be a bad plan.

You sound like you’re pretty knowledgeable, so I may be stating something you already know.

In a previous post you said you’re going for an Irish Sport Horse foal; I assume that means that one of these beasts is an Irish Draught. And the other is a TB? TB-ish? At any event, a lighter-boned animal.

Be careful of letting horses kick it out if you’re talking about an encounter between any horse and an Irish Draught. One kick from an Irish Draught in the right spot, even not a full-force kick, will shatter a bone.

Definitely appreciate your concern. He is the ID and she is a paint/Arab so not tall but quite broad. He’s not much of a kicker as horses go. Seems to prefer the paw and chew method of interacting with the world. She has definitely kicked the snot out of him. He is only mildly discouraged and seems to enjoy the contact. But having horses out together is never without risk and certainly including a pair of testicles in the mix makes injuries even more likely.

She’s really not kicky at all when he’s not chewing on her knees, so that gives me hope. Wish I could explain to him that’s not how horses get laid, but alas that was not part of my equestrian education.

He just seems like he wants a friend so badly. Like he NEEDS to be touched and I’m not up to the task of putting him in enough headlocks to satisfy that need. He’s a lovely guy and such a pet. I’m determined that he’s not going to live that lonely stallion life. If I have to do him up like Hannibal Lecter​:zipper_mouth_face: then I guess that’s my life now!

To answer your question a muzzle is made out of metal, is usually red and is made of straight lines curved into a half circular muzzle. They can eat and drink but not bite wounds that are healing.

I googled kind of like this. This is called red freedom muzzle. 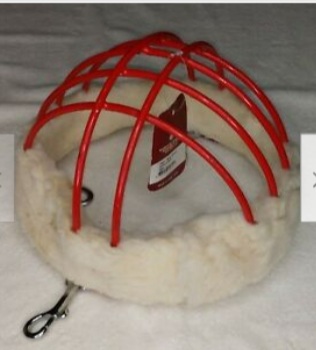 Find him a gelding friend that will stand up for himself when studly starts acting stupid.

No need to risk mare and stallion by being a fool and putting them out together with vague hopes he finds the right end this time, or she doesn’t kick his nuts off.

Also want to add - stop calling a 5 year old stallion a colt. He’s not a baby anymore. From the OP:

Horse in need is almost 5yo colt.

Find him a gelding friend that will stand up for himself when studly starts acting stupid.

No need to risk mare and stallion by being a fool and putting them out together with vague hopes he finds the right end this time, or she doesn’t kick his nuts off.

This. If it’s about a companion get him a gelding that will play but also keep him him in line

What makes you think he would be less bothersome to a gelding than a mare?

ETA- Real question, no snark. As an adult I’ve been around high end A circuit jumper stallions that live alone in stalls with no turnout. As a child I saw people keep backyard stock horse and mustang stallions in mixed herds like geldings. Those extremes both sound terrible to me, but I’m certainly not too cool to learn!

I’ll buy him a damn donkey if there’s good evidence that would be the best company for him. But he seems to do great with the mare when he’s not biting her so I’m inclined to give this a chance.

I’m also completely ready to buy a donkey or mule if someone can provide me with a good excuse. So do feel free!

Thank you! I’ll try this out.

At some point, you’re not going to want that mare to get pregnant. You said he was 5 in your OP. Calling him a colt also shows your enabling mindset around him.

I feel bad for your mare.

What makes you think he would be less bothersome to a gelding than a mare?

He won’t be. But geldings (boys) play differently than mares do, and that can make all the difference.

Also… is there a decent equine repro vet in your area? Why not just breed via AI instead of subjecting your mid-teens mare to the continual harassment of a 5yo stud?

We considered the metal basket muzzles for a pair of hard-playing 5yo geldings last winter. The fear was that one could bash the other (accidentally or intentionally) with the metal muzzle and cause significant injury.