I am looking for recommendations for a camera that I can mount in our trailer to monitor the horse, and bluetooth the video to our Iphones.

Thank you in advance!

I just purchased this Swift Hitch camera and am using it as both a rear backup camera to hitch my trailer up (bc my truck doesn’t have one) and to monitor horses during travel. So far so good and easy to use.

Swift WiFi Camera (SH04) is reliable and easy to use. Connect to iPhone DIRECTLY or be viewed via Internet. Rearview Camera for RV fifth wheel.

Has it held it’s charge well?

I used this DIY setup. It worked great until my battery pack decided to not charge anymore. Sadness. 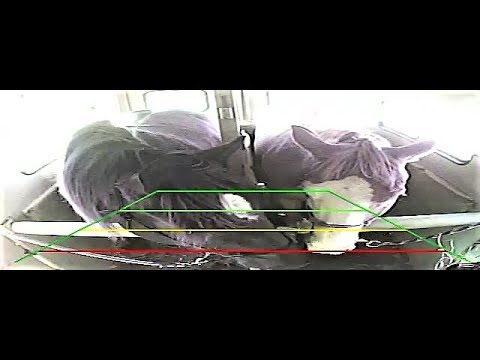 (Bluetooth isn’t generally used for streaming video, but you should be able to find a wifi solution.)

I have one from Tadi Brothers with a separate monitor. They may also have some that can be viewed on your phone if you look around the site. 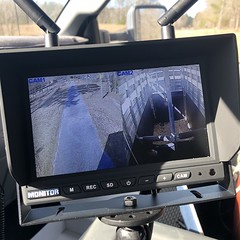 That would cause very distracted driving. I would rather not know what they are doing back in the trailer.

Thank you everyone for the advice!

wsmoak - Would you recommend the model you have? It looks like what I was looking for - having both backup view and in trailer view. Just wondering how long you may have had yours and if the external camera has been ok with rain/cold, etc…

What is the battery life like? I have an iBall and the battery lasts 2 hours, and it’s a bitchkitty to change.

I set a reminder to come back and answer this because we had a big trip planned. I have not had the camera system long, I bought it in December and there was some back and forth getting one of them replaced. So that’s the first thing. Tadi Brothers has done the work of matching everything up and they are heavy duty metal housings but this is still made-in-China electronics stuff. You’re paying for the knowledge and the customer service. They will get on the phone and troubleshoot and send a label for you to ship it back if it doesn’t work right, but be prepared to spend time thoroughly bench testing everything before you install it. That means having power sources available (you can probably find adapters around the house from other electronics.)

That said, the system worked great for our trip from Georgia to Virginia and back. The image cuts out now and then – anecdotally we think other wifi networks interfere with it, so if you’re in a residential area, or even passing several vehicles – betting people are traveling with hotspots these days to keep the kids entertained! If the image disappears for too long, we’d just turn the lights off and back on – mine are wired into the running lights for power so that worked to reset them.

It also worked far better on one camera view than the split view. Which makes sense, that is twice as much work to do.

We were hauling a three year old pony who had only been in a trailer once before as a yearling. Having a view of him back there to make sure he was okay was priceless. 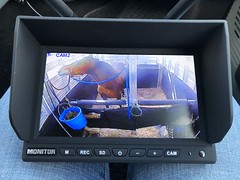 ALSO we had a scare when the tire pressure monitoring system in the truck came on. We got off the road and checked everything… the tires were fine, if perhaps over inflated because it was hot. So we got back on the road and… nothing. Then I put the monitor back up on the dash, and not too long after, another alarm. Again anecdotally… I think the camera system interferes with the TPMS in my Ford truck. If the monitor was on my lap (passenger!) or in its RAM cupholder mount, it was fine.

After even more research last night, I found TadiBrothers which seems to get very good tadibrothers reviews. Anyone ever heard of those? They have a 30-day guarantee so I could at least try it out on the road, as suggested.

My anecdotal evidence of n=1 …

They were awful. Stuff broken, hard to get ahold of, didnt know their products, stuff felt SUPER cheap for the price. I returned one set, they sent me another which was totally wrong compared to what I ordered, and I just gave up and sent the whole thing back.

After even more research last night, I found TadiBrothers which seems to get very good reviews. Anyone ever heard of those?

My post just above yours is about a Tadi Brothers setup. It is one step above consumer grade – metal camera housings, endless possible combinations of cameras and monitors.

I had to do a couple rounds of returns but I’m reasonably happy with what I ended up with. The sound on one of the cameras is bad but as I did not pay for sound… okay then!

I think we will end up replacing the antennae with something sturdier and run it to the front of the trailer – in general, making wifi work inside a moving metal box is a hard problem.

As for support they were very responsive considering they were all working from home. They were able to view videos I posted to show the problem. My issues were escalated to a more technical support person who walked me through troubleshooting and immediately issued a return shipping label.

So, Recommended with Reservations – you will need to put some time into bench testing and may have to return/replace parts until you get it all sorted out.

Finally coming back to say that I cannot recommend the Swift Hitch. In just three months I can’t get the thing to charge at all. Before it stopped charging altogether, the last time I used it I charged it fully and when I got to my trailer I couldn’t connect to its wifi. When it worked, it was great but huge disappointment and waste of money….

Thanks for coming back and useful feedback!

My husband got me a Trailer Eyes camera. It was a pain to install to the 12v battery in the trailer (well probably pretty easy for the guy who ended up doing it… more of a pain trying to get hubs to do it and failing!) but it works great and feels solid. I am sure there are cheaper options but this one is installed!