Hi, all! Currently watching the funeral processional as the Queen’s coffin proceeds along the road to Windsor Castle. As a horse owner, I am agog at the amount of horses used in this process. The Royal Household Calvary, of course, but mounted equerries (police?) as well.

Can anyone tell me what breeds of horses are used for these various units? I have no idea what breed is trained for the cavalry but the mounted equerries looked to be riding lightweight drafts. Shires, perhaps? I see some grey horses that are also big and perhaps part draft. (Perch.?)

Well, tears just jumped into my eyes. CNN just showed a shot of the Queen’s riding horse, standing with a saddle, riderless, of course, with a handler at its side. I believe this horse is a New Forest pony but I may be wrong. I’ve seen pictures of her riding this horse while in her nineties.

Thank you for any information. It is perfect that the Queen should have many horses escorting her coffin to her final resting place. Sigh! Tears again.

Pony’s name was Emma. Commentator said he thought it was a Highland pony, but he didn’t sound sure of that.

Google tells me the Household Cavalry is mounted on 98% Irish Draught.
Pony is a Highland & the Queen bred them.

The Queen rode Fell ponies in her last years. Most Fells are black but there are greys and they fade to white with age. Very hairy, legs, manes and tails. The Queen was a Patron of the Fells Pony Association along with the Cleveland Bay Horse Society. She bred both on her estates and allowed her stallions to be used by other breeders to keep the breeds going. She actually saved the Cleveland Bays from extinction by purchasing Mulgrave Supreme in the 1960s. He was headed for the USA when she stepped in to buy him. There were only four Purebred Cleveland stallions in the UK at the time.

A number of her ponies and horses work for the Crown in various tasks. The Bays are driven to carriages delivering dispatches to the Queen, bringing new Ambassadors to meet her. The Bays horse the other carriages seen hauling Royals to Ascot, in ceremonial parades. Other Cleveland Bays are in the Military as caisson horses, ridden mounts for the Artillery and other uses. There was a recent photo of the Queen petting a horse reaching towards her. It was a bay horse held by a Trooper. She was in a mint green hat and coat. Information said the horse was one she bred and gave to the Artillery, so horse likely remembered her from the farm! She was probably asking the Trooper how the horse was doing!! Ha ha

Lady Louise now drives Prince Phillip’s Fell Ponies. She has competed with them at the Royal Winsor Horse Show, been seen pleasure driving them on the Windsor grounds. She handles them very nicely.

The greys are called Windsor Greys, only used by the Queen to pull her carriages. They presently are a type, rather than a breed anymore. Often Irish Draft crosses.

The other various horses seen are often mixed breeding, purchased to fit the requirements of the troops. Color, size, level headed in stressful situations. They undergo continuous training to face the huge, noisy crowds, cannon fire, having to stand for long times. Again there is presently a large number of Irish Draft crossbreds for the size and bone needed, but other breeds are in the Military as well, TBs, Warmbloods.

The Queen may have also been Patron to other UK breeds, notably the New Forest, Exmoor, Highland ponies. The lesser known, rare breeds who still need help in getting their numbers up. She was Patron to many things.

@2DogsFarm. Maybe I should have checked Google! Everything I read about her riding ponies said they were Fells! Ha ha They both are usually dark and have LOTS of hair!

I am glad she was able to get out and ride, whichever breed they are. Hope to have a pony like that when I am old! Those who know them both, said the Queen had a better seat and hands than Princess Anne. I am going to miss seeing news about her and her horses.

I wonder what will happen to all the Queen’s horses now. Not the ceremonial horses - they’re likely to still be required for affairs of pomp and circumstance - but the Fells and New Forest etc that she bred, and her thoroughbreds. And all the human beings who worked for her in those capacities…

I thought I caught a glimpse the other day of 2 Clydesdales at the very back of the procession which brought her to Westminster after coming back from Scotland.

And today there was a stunning and very hairy drum horse carrying, well the drum and drummer. I don’t know if drum horse is a breed now that I think about it but he was short in stature and long in mane and tail. Just beautiful.

I have QUESTIONS! I watched the procession when they brought the Queen to Westminster Hall. There were 6 horses hitched to the caisson, the 3 on the left were mounted, the 3 on the right were not. What is the symbolism behind this??

there were also 2 outriders, one in front, and the other rode alongside the left of the mounted riders pulling the caisson.

These things have to have symbolic meaning… yes? Very curious.

The photo of Emma and the head groom standing off to the side chokes me up every time I see it.

Caissons are traditionally pulled by a team of six, with one in each pair being ridden. This dates back to when caissons were used to transport cannon to/from/during battle. This is the case with the Caisson horses at Arlington National Cemetery as well.

Yep, Emma is a fell. Although the queen bred highlands at her Scottish stud, Balmoral, and was a huge supporter of the breed, in later years they were just too broad to be comfortable, hence the fell. Terry her head groom was holding Emma for the procession today.

Camilla is taking over the Sandringham stud, but I’m not sure yet what is happening with the Balmoral highlands. The stud manager and stock manager, Sylvia and her husband Dochy, were both down in London today too.

The police horses just have to be over a certain height and have the right temperament. One I worked with passed all of its police assessments this year, he was pretty much full Irish Draft.

Emma just about did me in emotionally. I love the Fell ponies, if I hadn’t gotten hooked on Shires instead!
The police horses are often part or all Clydesdale, Shire, or Irish Draught in the UK. It can be very hard to tell at times because they almost always clip the feathers on the police horses. The greys at the head of the procession looked like they had a bit of Irish in them. Generally not any Percheron or Belgian, they aren’t popular in the UK.
I really, really hope someone takes over the Queen’s interest in the historic and rare breeds of the UK. But it doesn’t really align with the interests of William or Kate; maybe Camilla will, but she doesn’t have the same drawing power. Does anyone!?

@malarkey, My understanding is that each rider on caisson horses manages two of them. The caisson historically carried the gun crew, powder and shot for the cannon hitched hehind. The cannon was swung into place, men jumped off to unhitch the cannon from the limber, then horses were ridden away so they did not get shot. The riderless horses can be ridden if the gun crew needed to get away fast, gun not movable. The US caisson horses all wore saddles, in case they needed to carry the gun crew away. They only have one out rider called the guide horse. Caisson horses in either country wear open bridles like any ridden horse. They do not wear blinkers as do most driven horses.

Thanks @BWP! I was starting to doubt my memory about the Queen riding Fells ponies !

Given the number if children who are going to be living on the Windsor grounds, I assume Emma will have a job taking care of them. Did you notice The Queens headscarf on Emma’s saddle?

Thanks for the info, @goodhors!

I guess since I watched the funeral procession YouTube gave me more British military horse videos.

This was interesting. I can’t understand why anyone would grab a horse’s reins. That’s happened to me before when strangers want to pet the ‘horsies’. I should try that command voice, lol. I’m glad they’re allowed to do that and that other police personnel take it seriously and check on the horse and rider. Has anyone been to see the horse guards? 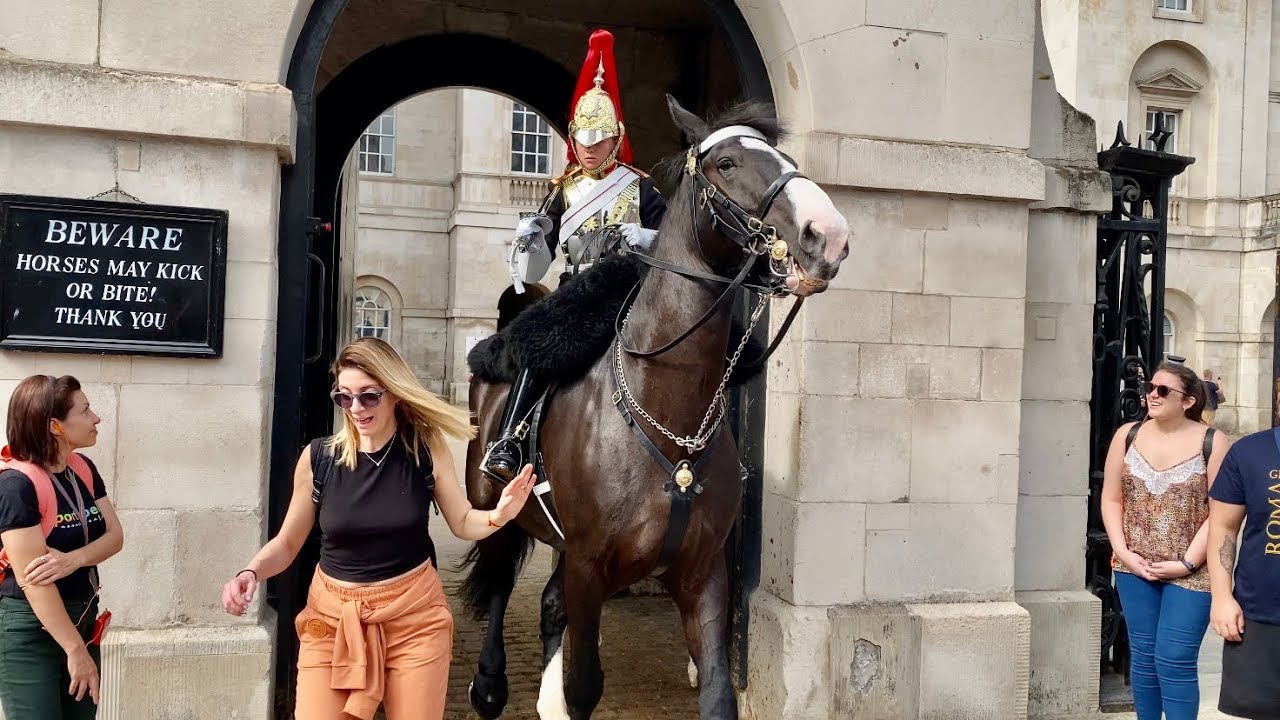 Here’s another video of a reluctant horse. I guess she (?) won that round. Perhaps there are other jobs away from that guard box she can fill instead? 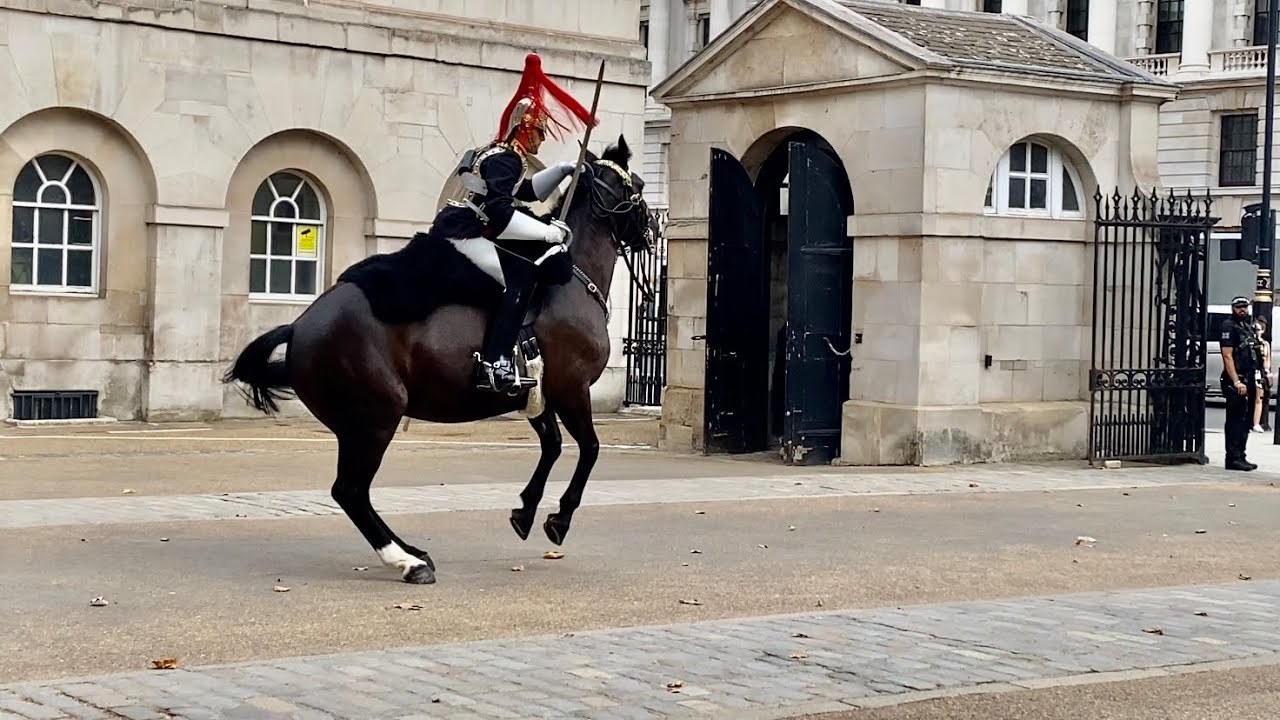 Interesting videos. The first horse was almost unbearably tempted by all the closeups, still did pretty well keeping feet quiet. People getting too close, trying to direct SOMEONE ELSES’S ANIMAL by grabbing reins always shocks me! Must be the same folks who try to get Yellowstone bison closeups!!

Glad the Trooper had a vocal and physical step forward response ready! I might have let my sword swing down! Too many ways for things to go bad with rein grabbing.

Second video? Just not going to be the statue horse today! Probably time to rotate that one to another job. Not the place to stage a confrontation.

I stand corrected on Emma’s breed

@goodhors There’s a gal who comes to The National Drive who drives a 4 of Fell Ponies.
Just saw her pic from the CDE this weekend, taking them through one of the Marathon Water Obstacles.
So Cool!

Agreed X1000 on the reingrab

WTH are people thinking?
Though, the friendly horse may have reinforced the Stuffed Toy response

Maybe 2nd horse was a Newb?
Practice is fine, but gotta jump into the pool at some point…
Well sat by the rider, with one hand stuck to that sword!

@rockymouse I’d like to think the family will carry on with the Queen’s horses, out of love and respect.
It’s not like noone else rides & certainly no lack of money.
I don’t see a 20,000 Thoroughbreds situation with the Windsors.

See link below. She was riding again in June this year! Against doctor’s orders! LOL