I’ve been reading a very uplifting post from 2015 about the kindness of strangers and being helped in unexpected ways, etc. So let’s share some new stories. When were you helped out, or when were you the kind stranger or friend with a helping hand? Or when have you offered or received support in large or small ways? How about some “pay it forward” stories?

I can think of many stories of my own. Here are only a few:
-When I was about 6 or 7 years old I was horse crazy but had absolutely no opportunity for contact with horses. My uncle arranged with a guy he knew who had horses to give my cousin and me pony rides one day. The guy, Larry, had a physical disability of some sort (MS, I think). He saddled his old gray Arabian mare – Lady was her name – and put my cousin and me one at a time on her. That saint of a mare walked steadily on her own around and around that indoor arena until Larry called her over, swapped us out, and sent her back to the rail. What a thrill to be riding “by myself”!!

-Fast forward 20 years. I have a saint of a TWH gelding and another cousin calls me to ask if he can bring his daughter (maybe 9 years old) out to see my horse. So, I saddled Doc and gave her pony rides in the pasture. Several years after that I did the same for a different cousin’s horse-crazy daughter on one of my off-track STBs.

-I took my Clydesdale to a fun show and as usual he drew a crowd around his stall. One middle aged woman (a total stranger) asked jokingly if she could ride him. Going along with her banter I said “Sure!” As she was laughing and shaking her head her daughter piped up and asked if she could take him in the egg & spoon class. She looked to be about 14 or so. I told her I ride him saddleseat and he’s got a huge trot, but it turned out she rode SS Morgans. She handled him quite well in the warm up ring and went on in the egg & spoon class. She dropped her egg a few strides into the trot, but I bet she enjoyed telling her friends about getting to ride an 18.2hh Clydesdale at that show.

-At another little fun show my friend and I were watching a youth western pleasure class. One young rider had a very well mannered, well turned out older mare. Mare had some old scars but was impeccably groomed, and she was a little stiff but certainly not lame. She never put a foot wrong, neck reined beautifully, and stood like a statue at the halt. She didn’t get a ribbon and the horse that won was ridden by an older girl with a flashier but ill-behaved horse who managed to not act like an ass in front of the judge a couple times. After the class my friend and I made a point of going up to the little girl and complimented her and her mare. She beamed with pride at that.

What warm fuzzy feel good stories do you have?

I don’t have a story, but since reading this story a few years ago about a man who would have stopped himself from committing suicide had one person smiled at him. Since then I have really made sure to see people when I’m in public. See them and acknowledge them, smile, and even ask if they are ok.

She didn’t get a ribbon and the horse that won was ridden by an older girl with a flashier but ill-behaved horse who managed to not act like an ass in front of the judge a couple times.

I grew up without owning a horse so knew that there are kids who longed for the experience. We raise our kids with horses and instilled in them that they should share what they had been freely given.

Often one or more of our horses were loaned under watchful eyes to children who wanted to show but did not have the resources.

My youngest daughter who had a summer camp for horsemanship would comp or scholarship a child either at reduced rate or no charge at all.

We had one horse who was well respected as she had won many regional and national class, this horse was used as the mount for three different kids in three years to win the high point youth award, this was a Class A show so the competition was great. The last year, the rider was an inner city kid who had never been on a horse until four months before… my daughter was wanting to prove to others just how good her horse was, that the horse always gave her best to her charge.

Daughter’s summer camp used our same horses our kids showed to many awards, none of the horses suffered from working with these newbies, the horses seemed to enjoy the change of pace. I remember one parent who was watching their child working in the round pen on daughter’s buckskin… the parent proudly comment on how well her daughter was doing “making that horse do” whatever they were doing. I showed the parent just what the horse could do as it could clear jump five foot fences with ease.,… but here he was side stepping to keep her darling daughter centered in the saddle as he did not want her to fall.

I guess the hardest to accept was when we were approached by a parent who asked for a lock of mane from Foxie so she could put it in her child’s casket. Her daughter was killed in an accident, The woman said her daughter often said Foxie was the only “person” who knew her and liked her… There had been times when this girl would come over to visit only to go to the barn and spend hours taking to and grooming Foxie. I have a photo of my daughter with this girl and another friend on Foxie taken when they were just goofing off in the backyard. 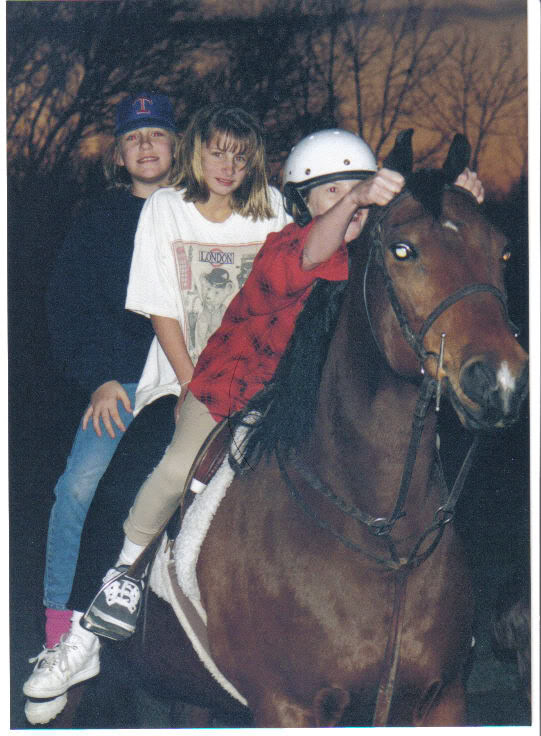 this photo below is a combination of my daughter at age five in showmanship class with her horse, then same horse ten years later having been loaned to an inner city girl who always wanted to show a horse, so daughter let her show her horse (daughter made the combination photo) 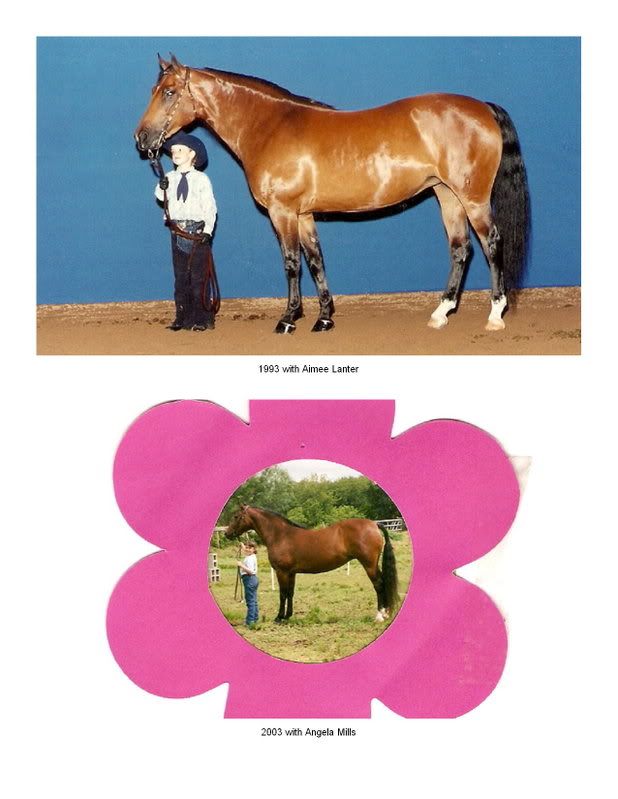 There have been many times over my horse owning life that I have spent time leading a small child on one of my saintly horses( around and around the arena or pasture) . They were beaming and I was usually freezing or burning up depending on the weather ( seemed it was either or)

I also remember the horse crazy teen girl from church riding the shoes off my kids pinto gelding and she never stopped grinning.

I remember being given the opportunity to learn to ride at 10 by a neighbor girl with 2 ponies. I always try to accommodate a child if I can.

the good experiences go beyond horses, my daughter’s golden retriever has been a friend to all comers. Our other daughter was doing Christmas family photographs at the Fort Worth Stockyards, families from across the land …several had daughter’s dog added to their “family” photograph (after all all Goldens look alike sort of like bay horses) Sucha the dog was included in at least ten family photos as the family’s pet. 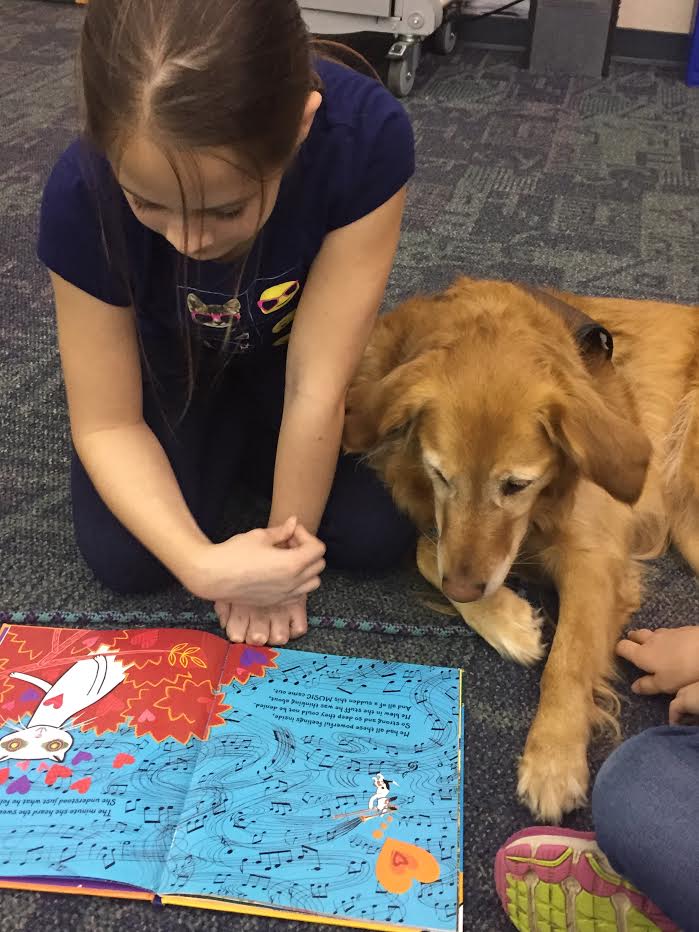 then there are the miniature horses… what to do with them? Daughter would haul them to school to be the subjects of the high school’s photography class when the assignment was photography an animal 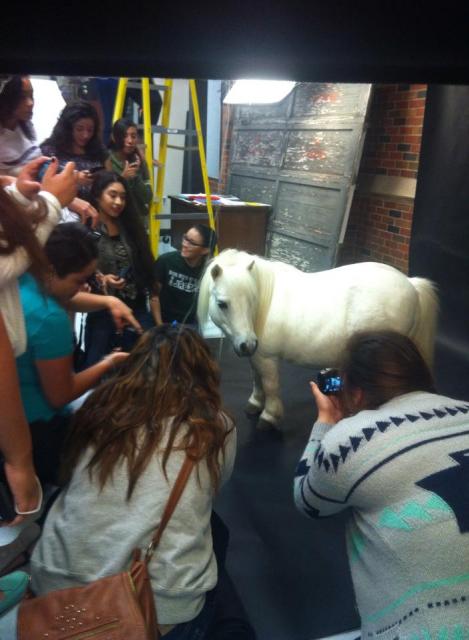 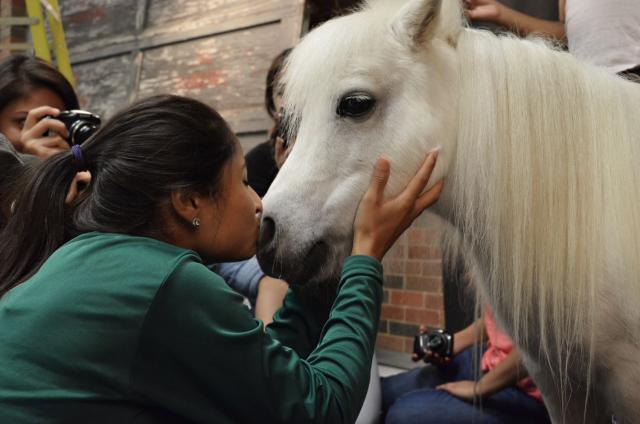 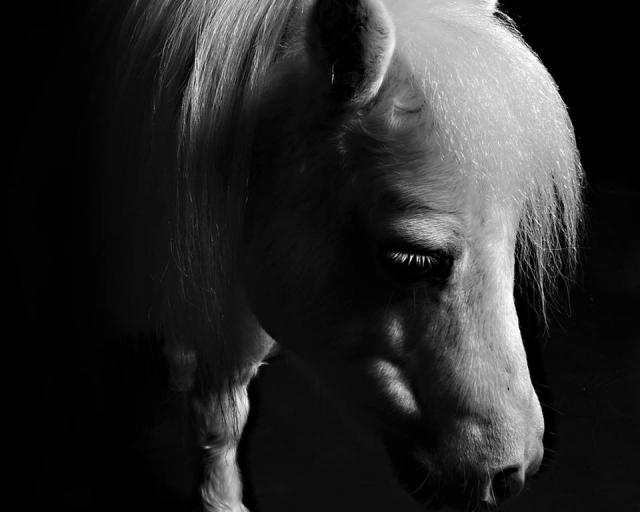 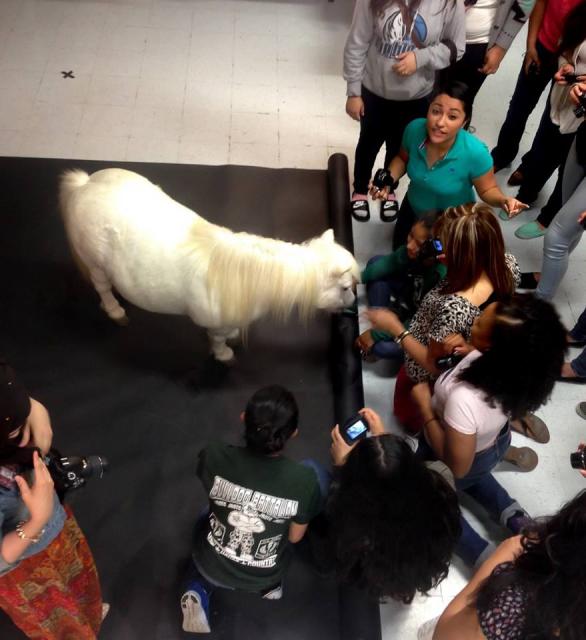 the first two years was secretly done, slip horse in up the handicap ramps but by the third year the principal specifically went before the board of education to explain, yes there will be a horse in the building but it is OK (this "horse in the building"came to light after a few of the kid’s photographs which were entered in state competitions won awards

Pay it forward… I have received “help” in many forms over the years, and in turn when somebody needs help, I will do so. I’ve given many free lessons and training rides, and that’s kind of been my motto - all I ask is you pay it forward. Somewhere down the line you will be the person with the knowledge and someone will need your help…

As for stories… well I have one but it’s not horse related. I was in a local store, buying large, heavy bags of compost for my garden. I bought a large amount (like 20 or so). The gal at the cash register asked if I needed help loading it, was going to call another employee up to help, when the guy behind me volunteered his help. Total stranger. Never seen him before or since. He helped me load, I thanked him, off I went.

I was at a barn I used to adjist at - with my then grumpy 17year old DWB gelding and 3 year just broken in Hannoverian mare. Breeds are relevant due to movement.

There was a couple of parents hanging around with their kids and their scruff-ball pony - shared between 2 kids. She was an absolute saint and was in with my horses on turn-out - the kids would bring my two in with their pony as they knew that I had quite a drive between work and the barn. They would also groom them as well as they could - which wasnt to my standard but I did not re-groom in front of the kids.

Well, said saint pony was lame one day - well, a bit off but the kids decided it would be wrong to ride her. There were a couple of other kids who did pick on them a bit including, when the kids were grooming my horses, that the bossy britches kids were going to ride my horses and not them. So, that day, I tacked my two up and asked the kids which one they would each like to ride - once mounted, I took them for a trail ride around the farm and the adjacent one.

The smiles on their faces were worth the hassle and the missed schooling sessions.