How Is Winter Going?

Seems like no one is doing much driving lately! Still working on your bell training? We were busy during the Holidays with the bad weather, rain, freezing rain, snow, so everything took longer to get done. Put chains on the small tractor pulling the spreader. That means it is really winter here! Ha ha

We got a new axle on the manure spreader after it broke. Husband had tried fixing it, then it broke again beside the fix! So his time before Christmas and then the 2 nice days after, was spent fabricating a new axle, box edging, adding galvanized sheet metal inside the box. It is now working beautifully! I was amazed at how the price of steel has gone up since his last project. Metal cost as much as the entire spreader (older, used) did 6 years ago!! But looking for usable , older spreaders showed a huge increase in prices. Sticker shock here!! Most were basket cases despite the prices. As a joke, husband called the Dealer to price a new spreader, same size. $ 14, 000!! YIKES!! So we fixed the old one instead.

The other expense was a Vet visit for the filly after cutting herself in two places. Of COURSE it was a Sunday, poor weather, late evening when we found it bringing horses in. DOC came out and gave her LOTS of painkiller, cleaned and stitched her back together. Filly was pretty good being confined with a friend. Wounds seem to be healing pretty nicely. Took the stitches out this week. Had to take off her protective rainsheet that was rubbing the hip wound open when we turned her out after stitch removal. She ran and bucked fo an hour getting all her energy used up!

Got a couple horses shod with ice studs and snow rim pads. Ready if husband wants to play with them. At least with the snow they have all gotten their mud off! A bonus in saving grooming time. All the newly shortened tails look nice as they trot away. So even! Length will be back by spring. So far we seem to run out of daylight before he can get them driven. But soon!

Anyone having more fun than us? Ha ha Nice weather (30s-40sF) predicted for another week, then a clipper with cold weather coming our way. Maybe I will just hibernate between chore times. The tractors are starting well, not plugging in tank heaters yet, things are good!

Sigh…
I had to check, and according to the photo I took, last drive was a rare nice day November 20.
My trailer was on loan, so I drove myself to the site & hitched a ride with a Club friend & her young (coming 5) Friesian.
We were at the local historic recreation park that maintains trails for us to drive. Nice to have miles of mowed paths big enough to accommodate a carriage.

Adventure happened when she hopped out to help an elder member (80yo & still hauls, hitches & drives himself) unload his DraftX & cart & tossed me the lines.
No problem… Until she looked my way just after pulling his horse off his trailer & neglecting to attach a lead.
Normally no Biggie, but her eyes got HUGE & she yelled at me to “Get down! Quick!”
Um… wonky knees make “quick” rhetorical.

Turned out the snap - not buckle - attaching left line to bit had come undone.
She started coming to me, still holding his horse by the halter, while I used my calmest Whoa to keep her horse standing.
But he must have felt the slack on the left & so pressure - however slight - on the right & started to circle right.

She got to us, grabbed his bridle, so now she’s Monkey in the Middle between the 2 Drafts.
Fortunately, both behaved, we got things sorted, including switching her lines to a pair that buckled & had a very nice drive.

Since then, nada.
Weather has been not awful, but not nice enough for wimpy me to drive.
I clean stalls - barely used as they’re out by choice most of the day - feed, do some half-ass grooming & dispense treats.

Was that Alyss who skewered herself?
Hope the healing continues ASAP.

{knock wood} no injuries here, though the sacrifice area that opens to pastures got iced over for a couple days.
Leading to minor heart stoppage for me when Bugs came trotting across the ice & Walking horse did a mild half-split behind on a patch.
Hackney Pony seemed to be the most cautious. Go figure.

Ice is still there, but a thaw/refreeze has it roughened enough so footing is safe-ish & everyone seems to be careful.
Saving silliness for the bare ground.

Or a Whips & Wheels CT.
Both at Hoosier Horse Park

Planning on the Fall Ntl Drive

We have been very lucky in Ontario with our winter being so mild so far. Just below freezing most days and only a few inches of snow. No frost in the ground - very unusual for sure.

We have not been driving as the footing has been pretty poor. Either mud or ice and my husband does not enjoy driving in the winter. But he does snowmobile, so he tends to do that (though not this year). People are asked to stay home and we are not allowed to go out of our “area”. There is more snow up north a bit, but are not allowed to go there under these rules. So carriages are neatly put away, just waiting for spring weather.

Sorry to hear your girl got hurt goodhors, but glad she is doing well and its a thing of the past for her! Horses!! And glad no major issues with those big guys 2Dogs!

We still have a lot of COVID rules here in place and most horse shows were cancelled last year. This coming year is not looking so hot as well and with the border still closed, it looks like another year for us for 0 driving shows. Some local hunter shows may go on, but even then, its looking pretty grim right now. Last year we could have 250 people at a show outdoors but only 10 indoors, so indoor shows were all cancelled. Hopefully these new rules don’t last too long as with gatherings of 5 outdoors, shows here will be a no go as well.

We have just gone under another “state of emergency” and things are to shut down as of tomorrow. We already had some fairly strict rules, but they are getting a little more strict with more closures, less people can gather (5 outdoors now and 0 indoors at your house) and stores have shorter hours. Barns can only have 5 people there at a time and I have one of my ponies boarded out so I can ride through the winter. Hopefully all will stay the same and I can continue to ride but we shall see. No lessons are allowed to be taught so its just going up, tacking up and riding and leaving as soon as I can so others can do the same.

I was able to take one of our driving ponies to a well known hunter/jumper clinic early October and it was even decent enough to be able to ride outside so that was a bonus! This is when we were allowed to still take lessons and I did have a blast. I got the usual comment that he should be a hunter and not a driving pony, but hey, driving people need nice ponies too!!

We are supposed to have a Belinda Trussel dressage clinic at the end of this month at my current barn but because of the rule change, we will have to post pone it and see how it goes. Fingers crossed numbers go down and we can start to go back to normal.

A few pics from the clinic in October. I did a trace clip on him as I knew I was going to continue to ride through the winter and he does get sweaty. I have to re do it sometime this month as he’s got so hairy again! I guess he was expecting some colder weather! 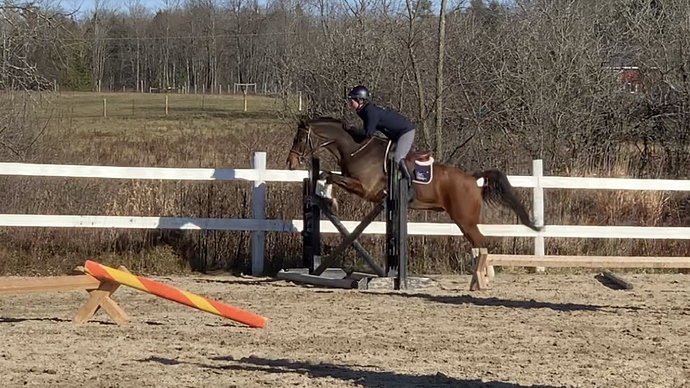 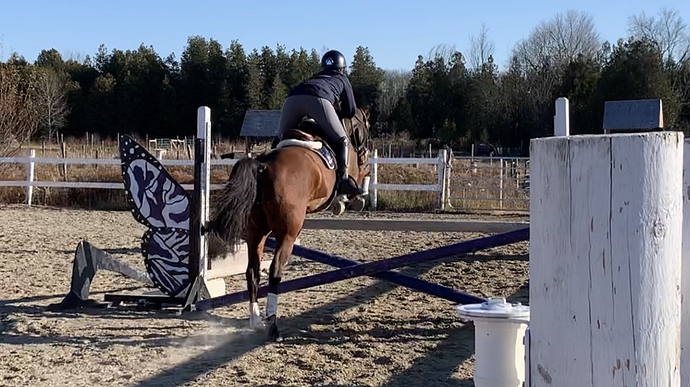 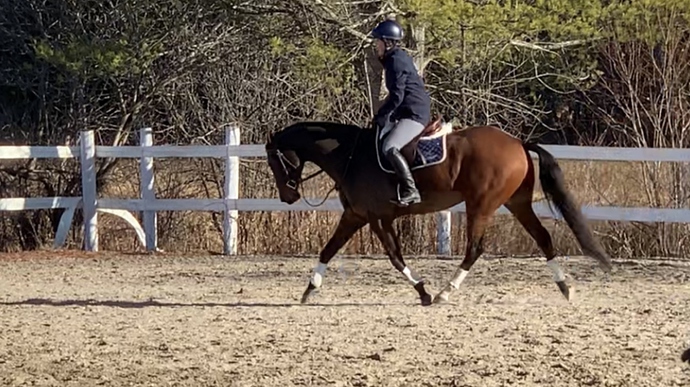 We too are in the throes of winter, albeit it’s been relatively mild so far. I’ve only driven a couple times since November but a casual drive always sparks memories of my first drive and the novelty of driving. I’m always grinning and grateful.

Looking forward to selecting 2 or 3 shows or DT’s to attend this summer and perhaps a clinic if one is nearby. Those dates help me set up my legging up schedule.

I also forgot to mention I did enter in a Hunter show early October in the 2’3" division at a large rated show. 28 in the class and we ended up with a 4th. Not too bad for only 3 weeks of riding over fences this year! I was super happy with him and had a great time! My fingers are crossed that shows will be allowed to continue later this year (outdoors - indoor season is cancelled). Everyone has put up dates but they are all tentative of course.
My husband also built me a few more jumps at home and I’ve had a blast jumping them with all my boys! 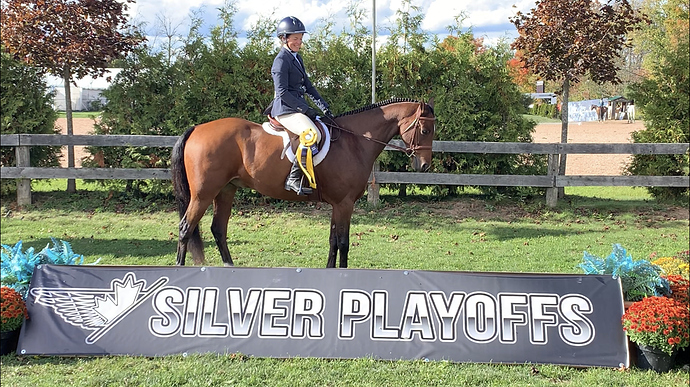 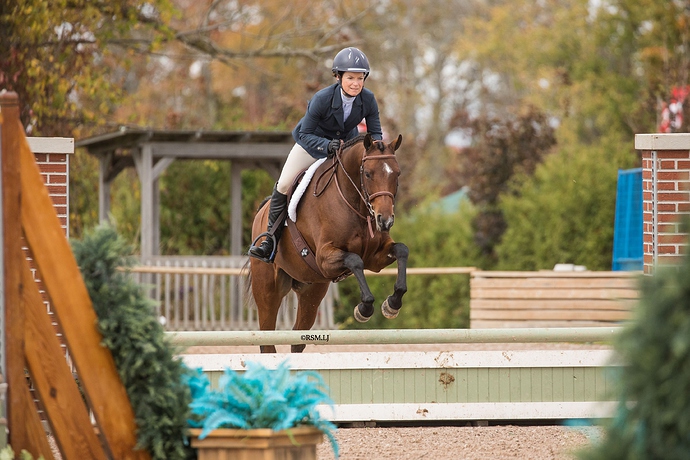 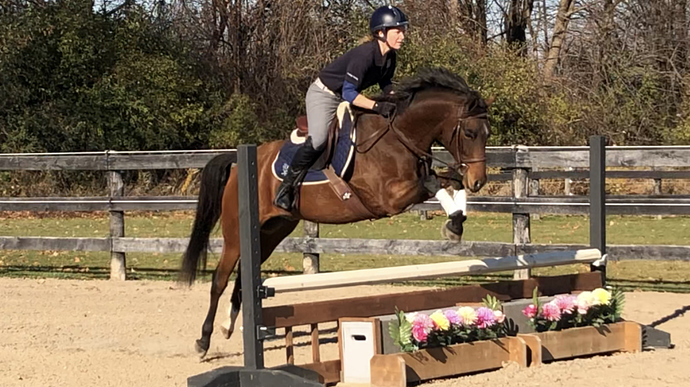 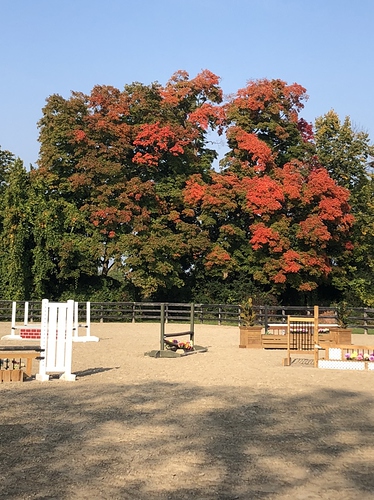 DJ, you look really nice and obviously the homework riding, is paying off! Congratulations! I can sympathize with your husband, trying to manage reins in the cold in gloves. Warm mittens don’t allow much finesse, but snowmobiles don’t care! We do not seem as confined as you folks, but we are not improving at a great rate either. Hoping the vaccine gets out faster and helps.

2Dogs, it was Peri that got hurt. She is Alyss’s filly, turned 4 on New Years! Wounds have held together, hip scabs staying on. Shoulder wound is just the wound line and stitch marks now. When the hair grows back I think it won’t show. Not sure on the hip one yet. I hate when wounds “leave a mark!” Might have to change her name to “Nick!”

Sorting in the tack room, I need to own less tack.

Weather was sloppy, melting the frozen ground and making draining fields. My ditch is draining a fair amount of water from across the road fields. Supposed to get colder again, though not getting the snow of the mid-state’s predictions. “This local prediction is good for the next 5 minutes.” Ha ha

The ponies, as my sister said after seeing their pictures, are “overwintering well”–too well, in fact. We moved back north to be closer to my parents, and there are many pros–5 minute walk to the pony vs 35 minute drive and better arena footing for driving (cow horse trainer at old barn wanted it REALLY DEEP) the addition of a grass hay slow feeder for the old age pensioners here has resulted in an expansion of Mr O’Pony. In spite of more frequent exercise, I have had to 1. go to the LAST HOLE on his girth followed by 2. REMOVAL OF THE HIS RIB PROTECTOR in order to buckle it yesterday…

Decided it was time to separate Mr O’Pony and mom’s pony Nigel from the oldies and institute a diet plan. They are very offended. 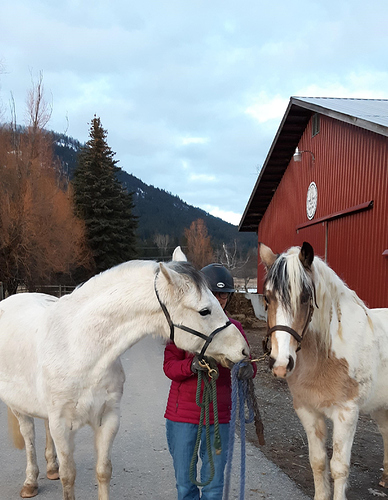