Hunter rider with a question about Western hackamores

My mom is a lifelong hunter rider in her late 60s who, for a variety of reasons, decided she no longer wants to ride large, big-moving hunter-jumpers. About 18 months ago she bought a POA-type pony to play around with doing some very light trail riding and walk-trot work in the ring. Pony was being used in an English lesson program, but had come from a sale barn so his history prior to that is unknown. We have come to believe that he has had Western training - perhaps more so than English. He’ll do the tiniest, slowest little jog-trot and he also neck reins. He is very soft in the mouth but also a bit fussy; he seems quite confused by the idea of a steady contact.

My mom has become interested in the idea of riding him in Western tack, partially to give her a bit more security in the saddle and also because she thinks he might be happier without a bit. While I used to ride one of our retired hunters in an English hackamore, I know nothing about Western hackamores other than that there seem to be a lot of different types. What would make sense for us to try when I have no idea what he might have been ridden in before?

Also if anyone has any thoughts regarding where to start with saddles, that would be much appreciated as well. My mom is a petite 5’3”, pony is a large but with a fairly light build.

I’ll try to attach a picture - here he is dressed up to do the Leadline with my 3-year old son. 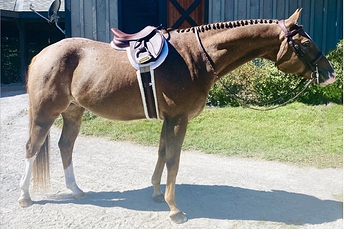 My gosh, what a cutie!

I ride primarily English now but had a few years exploring AQHA, and if I think about taking a true steady contact with any of those horses I think they’d be at least a little confused! Has your Mom tried neck reining entirely with this pony to see if he prefers that? Any fussiness with the bit if she doesn’t attempt contact?

Do you have anyone you can borrow a Western bridle/some bits from?

He sounds like a good egg, maybe just not understanding the question.

Also an english h/j rider here, but I do have a “small S” hackamore that my mare really likes. I have jumped her in it too, the steering is not as direct as with a bit, but it was OK. For pleasure riding, it would be my mare’s choice, she likes it. I think the barrel racers like this type of hackamore. I reduced it’s severity by padding the nose, and switching out the chain under the chin for a leather strap. This sort of hackamore is worth a try, if your mom is interested in trying one. Very cute pony!

Just keep in mind that you don’t ride with English contact in a mechanical hacks more. You ride with a draped rein and the horse responds to the rein swinging. You have no real direct or open rein either. You need neck rein. The horse may go fine in a draped rein in the snaffle too.

I would not bother getting a proper Western hackamore-- the rawhide bosal and horse hair mecate.

Just ride him in a mechanical hackamore (or a snaffle) and put a drape in the reins. Remember that Western horsemen have a different philosophy of bits. It is a signal device, so you only pick up the bit (or move the bosal on his head) if you mean to ask him to adjust his posture in front. Everything else is done with your seat, weight and leg.

if you just ride him with less contact, in whatever bit you choose, you guys might work it out.

Thanks so much for all of your thoughtful replies!

I should have been more clear - my mom is more than happy to ride him with a giant loop in the reins forever. I only mentioned his apparent confusion about contact to explain why we thought he had been mostly ridden Western, not to suggest that it’s an issue we’re trying to work through. His only job is to be safe and pleasant, which he is, so he can go however he likes

Even with a snaffle he isn’t fussy at all on a loose/drapey rein, and he definitely neck reins so there’s no need for any direct or opening rein. We were curious about trying a hackamore just because we thought perhaps that might have been what he was more used to from his Western days, and if he doesn’t seem to need a bit, should we bother with one?

Another consideration that I hadn’t mentioned was that we thought some type of hackamore might make it a little easier for my mom to get a bridle on him! While he is super sweet and has very little in the way of pony attitude, he doesn’t care for having his face messed with in general and gives her a hard time about taking the bit (he doesn’t try this trick with me, but she is older and has some health challenges that make certain things more difficult for her, and he has her number on this one).

Thank you! He is definitely a good egg

I wish I had someone to borrow tack from but I really don’t know anyone who rides Western.

Thank you! That sounds like a good idea to try, and I would definitely want to make it as mild as possible for him.

Yes, I totally get that! Both my mom and I have done a little bit of Western before (on horsey vacations, etc.) but have never been in the position to select Western tack.

I think I’ll try him in the mechanical hackamore I already have then (assuming I can find it!). Thank you!

Mechanical hackamores exert quite a bit of leverage. If this guy is light and responsive, then I would not want to step “up” to a mechanical hackamore from a snaffle. If she has no intention of showing, why not try a sidepull? It’s much gentler and the action is more similar to a halter.

If he was started by a decent Western trainer, then he was likely ridden in a snaffle, for what that’s worth.

I apologize if this is duplicative…have his teeth been done?

And I would put him in a Little S. They are pleasant for the horse, low on leverage, and lightweight.